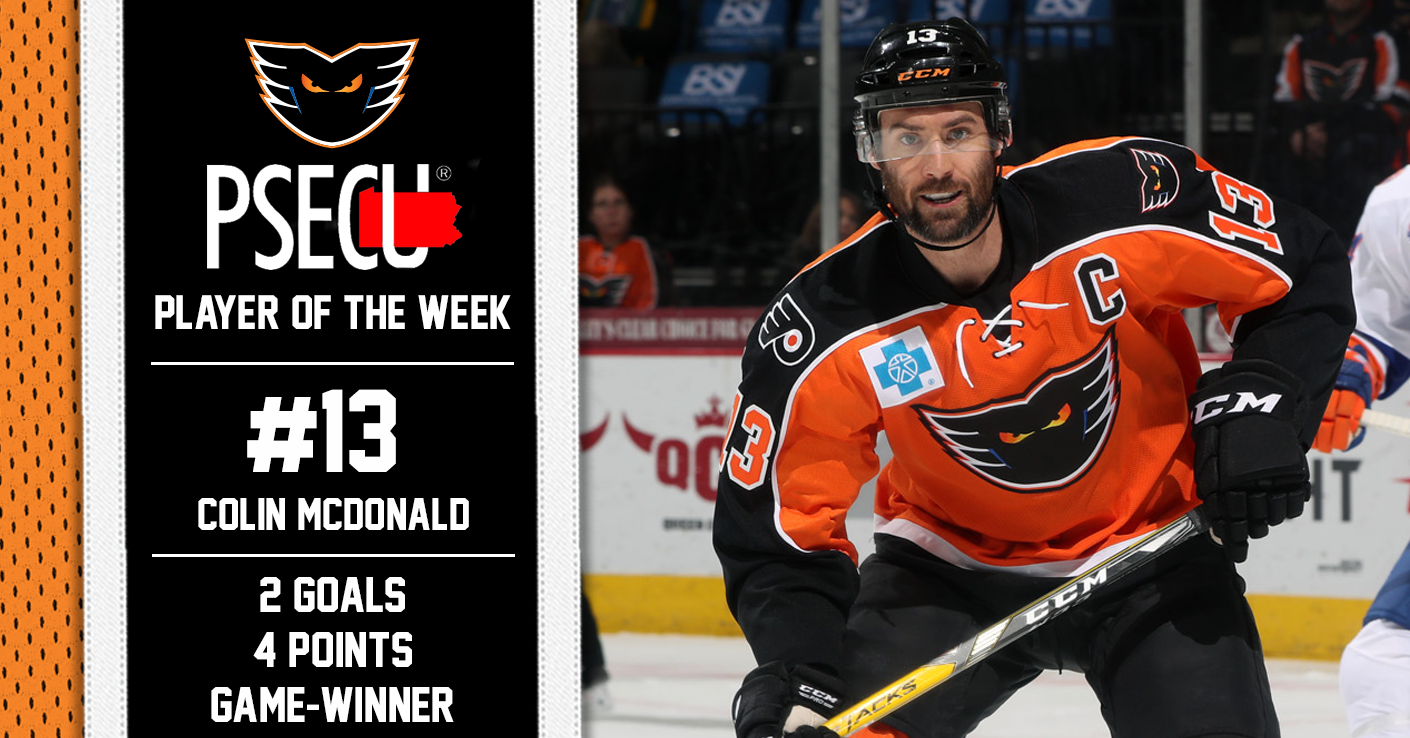 LEHIGH VALLEY — After a three-point performance in Sunday afternoon’s Atlantic-Division-Title-Clinching game against the Providence Bruins and netting two goals this past week, Lehigh Valley Phantoms captain Colin McDonald has been named the PSECU Player of the Week.

The playoff-bound Phantoms headed south to kick off their week with back-to-back games against the Charlotte Checkers on Tuesday and Wednesday night.  Despite coming up on the wrong end of the scoresheet both nights, McDonald managed to light the lamp for his first goal of the week in Wednesday night’s tilt.

Late in the second period, Danick Martel collected a turnover and rushed into the Checkers’ zone on a 2-on-1 with McDonald. Martel dished cross ice, to his right, and McDonald put the puck up and over the left side of Charlotte goaltender Callum Booth for the Phantoms first and only goal of the game.

The team continued its road trip, this time by heading north, for games against Hartford, on Saturday night, and then against the Bruins in Providence on Sunday afternoon.

Although Lehigh Valley dropped a 3-2 overtime decision to the Wolf Pack, earning a point helped to move the team closer to clinching the division crown for the first time in over 14 years.

The Phantoms came out swinging in the first period on Sunday — outshooting their opponents 20-8 — and put up three goals in the first 16:34 of play.

McDonald collected an assist — his first point of the game — on the Phantoms second goal when he dished a no-look, backhand pass across the ice to Greg Carey who was waiting on the backdoor.  Carey fired home his 31st goal of the season to make it 2-0 Phantoms at the 11:49 mark of the first.

Later in the period, with just under two minutes remaining in the period, the captain became the benefactor of an equally impressive set up from Mikhail Vorobyev.

Vorobyev stole the puck off of a Bruins’ player in the defensive zone and fed it into the slot where a streaking McDonald slammed it home to give the black and orange a 4-1 lead. The goal was McDonald’s eighth of the season and went on to be the game-winner in the Phantoms 6-3 victory over Providence.

With the victory the Phantoms claimed the American Hockey League’s 2017-18 Atlantic Division Title.