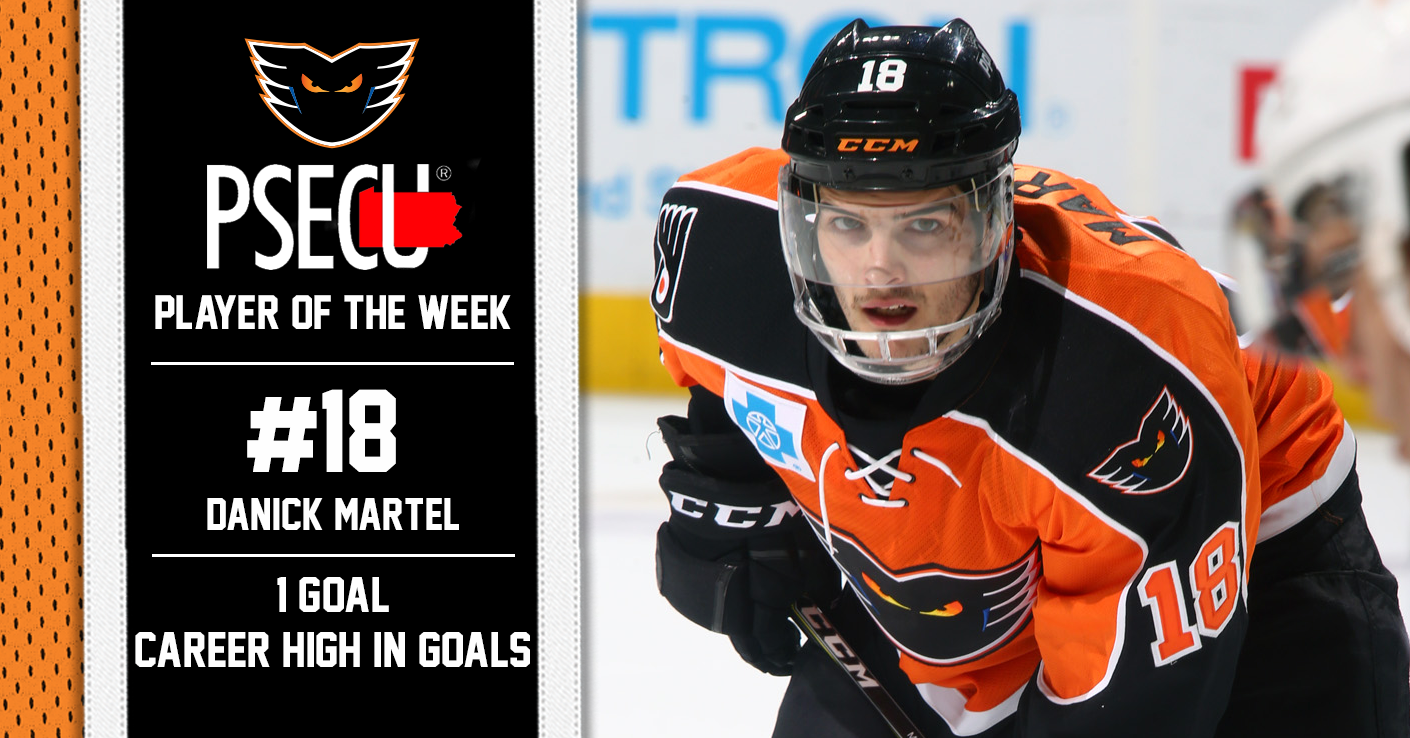 LEHIGH VALLEY — After setting a new career high in goal scoring with 23 tallies on the season and now being tied for the most-ever games played as a member of the Lehigh Valley Phantoms, forward Danick Martel has been named the PSECU Player of the Week for the second time this season.

With only two games on the slate for Lehigh Valley this weekend — for the first time in three weeks — the Phantoms traveled to Providence to take on the Bruins Friday and Saturday evening.

While the Bruins managed to draw first blood, just prior to the halfway point of the first period in Friday’s game, the Phantoms quickly answered just 2:14 later thanks to the stick of Martel.

Fellow forward Mikhail Vorobyev dished a centering pass from the corner to Martel who was waiting near the right post of the Providence net.  The Drummondville, PQ, native quickly spun the puck to his forehand and jammed it up and over the right side of Bruins’ netminder Zane McIntyre.

The goal was Martel’s 23rd of the season, placing him second overall on the Phantoms and tied for eighth in the AHL. It also marked a new career high for Martel, surpassing his previous personal best of 22 during the 2015-16 season.

The fourth-year professional has also now scored 20 or more goals in the last three consecutive seasons.

While Saturday’s 6-1 loss proved to be a mostly forgettable affair for the Phantoms, it would mark the 192nd game that Martel would play in a Lehigh Valley Phantoms uniform. This ties the 23-year-old winger with former Phantoms Taylor Leier and Robert Hagg for the most-ever games played with the franchise here in the Lehigh Valley.

Leier and Hagg, who both graduated to full-time positions with the Philadelphia Flyers this season, have now played a combined 126 games for the NHL club.

Martel is now set to break the record this coming Friday, March 30 at home inside of PPL Center, against the Providence Bruins.