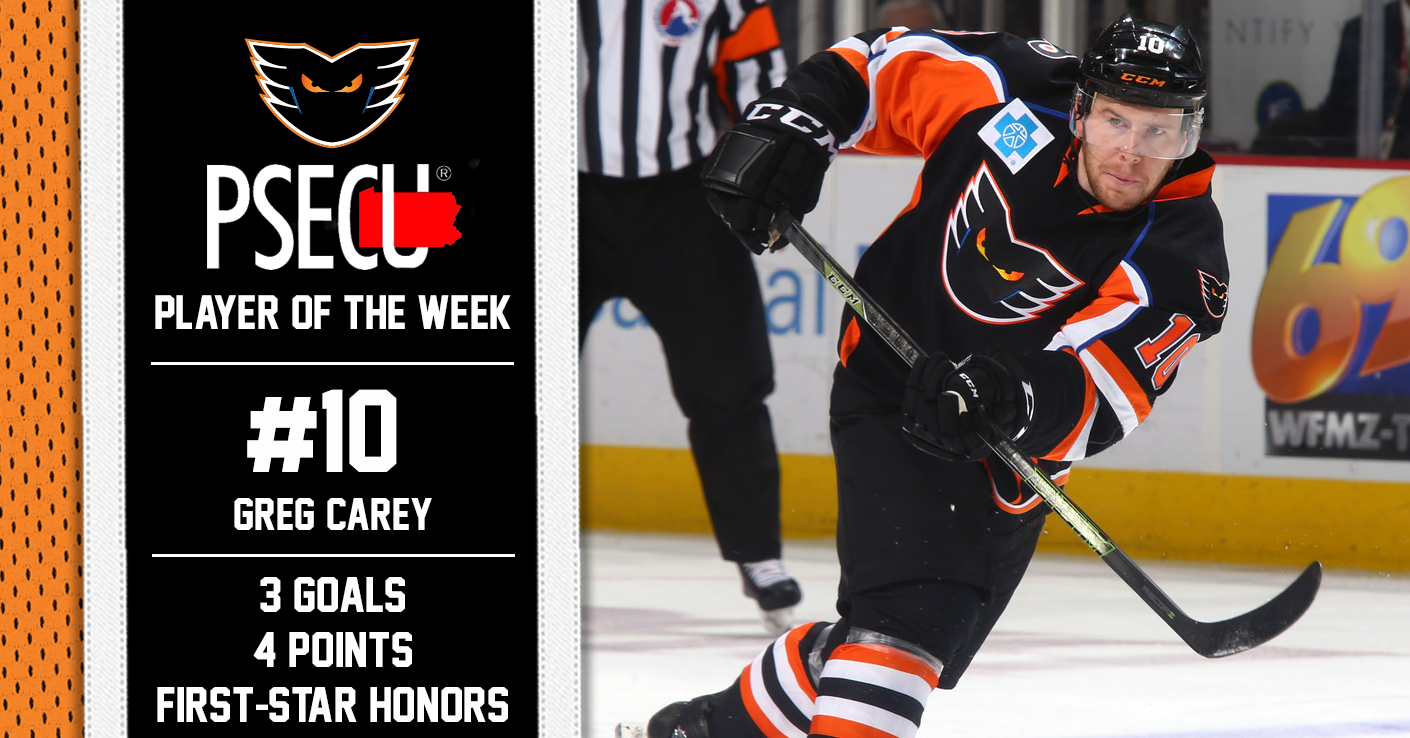 LEHIGH VALLEY — With three goals and an assist in this past weekend’s three games, Lehigh Valley Phantoms forward Greg Carey has been named the PSECU Player of the Week for the second time this season.

The Phantoms kicked off the team’s second three-in-three in the month of March with a home-and-home series against the Bridgeport Sound Tigers this past Friday and Saturday. Heading into the match up, Lehigh Valley had a chance to decrease their magic number and inch ever so closer to clinching a 2018 Calder Cup Playoff Spot.  Friday night inside of PPL Center was a tight game that, despite a combined 73 shots, saw only five goals hit the back of the net.

After a scoreless first period between the two teams, the Sound Tigers would convert just 10 seconds into the middle frame.  The Phantoms answered back, almost a minute later, when Tyrell Goulbourne became the beneficiary of a Phil Varone pass to the front of the net.  Carey tallied a helper on the team’s first goal of the game as his initial shot bounced to Varone who then fed Goulbourne.

Early in the third, with the Phantoms trailing Bridgeport 3-1, Carey brought the Phantoms back within one when he potted a rebound off of a Phil Varone shot while battling towards the front of the net.

Despite a feverish comeback effort by the Phantoms in the third, that included 20 shots on net, the team dropped a 3-2 decision.

The following evening, Lehigh Valley was successful in getting revenge against the Sound Tigers, which came in the form of a 4-1 victory.

Danick Martel got the scoring started past the halfway point of the first period, but the game would later be tied up at one heading into the second period. Carey again showcased his goal scoring prowess as he collected a pass from Mikhail Vorobyev on a power-play rush and fired it past the blocker side of Bridgeport’s goaltender Kristers Gudlevskis.

Later in the same period, Carey cashed in with an absolute rocket of a slapshot from center point. Phil Varone’s face off win floated back to defenseman Will O’Neill who fed Carey for the one-timer.  The goal would be his 26th of the season and would go on to be the eventual game-winner.

Carey earned first-star honors for his two-goal performance as the Phantoms notched their 39th victory of the season.

Saturday’s game would be Carey’s third multi-goal game and eight multi-point game of the 2017-18 season.  He also raised his number of game-winning goals to five, tying him for the team lead with fellow forward Phil Varone.

Now with 26 goals on the season, Carey not only leads the Phantoms in that category, but is also tied for second overall in the AHL behind only Charlotte’s Valentin Zykov who currently has 30.