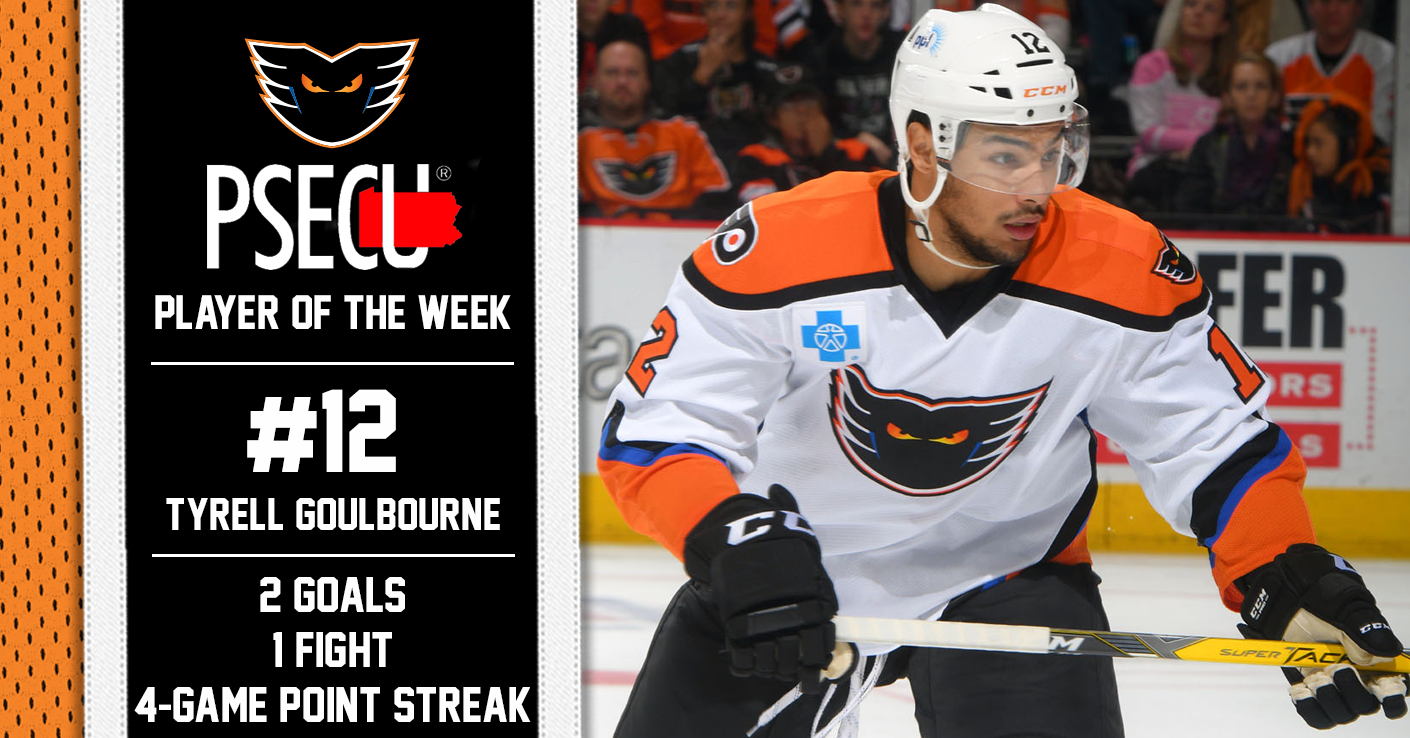 LEHIGH VALLEY — Having posted two goals and a fight in the past week, Lehigh Valley Phantoms forward Tyrell Goulbourne has been named the PSECU Player of the Week.

Coming into this week’s slate of games, Goulbourne was riding a two-game point streak from prior games against Hershey and Laval.  And after dropping the gloves with Wilkes-Barre/Scranton’s Garrett Wilson in the first period of Wednesday night’s game, Goulbourne would find himself extending the streak to three games thanks to a shorthanded goal.

With a commanding 3-0 lead at the beginning of the second, the Phantoms also found themselves down a man due to a James de Haas slashing call.  During that kill, Goulbourne received a pass up the boards from Adam Comrie, chipped it past the Penguins player on the point and was off to the races before depositing the puck in the net over the left shoulder of goaltender Anthony Peters to make it 4-0.

The goal would be Goulbourne’s first shorthander of the season — and career at the AHL level — and the team’s fourth, moving them into a tie for fourth in the league.

Lehigh Valley would go on to win the game against the rival Penguins 5-0 on Military Appreciation Night.

On Friday, in a 5-4 edging of the Hershey Bears, Goulbourne started the scoring for the Phantoms when he put one through the five hole of goaltender Pheonix Copley.  Although the shot wasn’t placed where he intended it to go, the 23-year-old winger was happy to find the back of the net yet again.

“It’s weird, Goulbourne said.  “You have to be lucky to be good and be good to be lucky.  I’m pretty sure everybody in the building thought I was going top corner and it went five hole, but I’ll take it.”

The goal stretched his point streak to a career high of four games.

The Edmonton, Alberta native is just two goals away from tying his career high in goals (7) in the AHL that he accumulated in the 2015-16 season over 73 games.