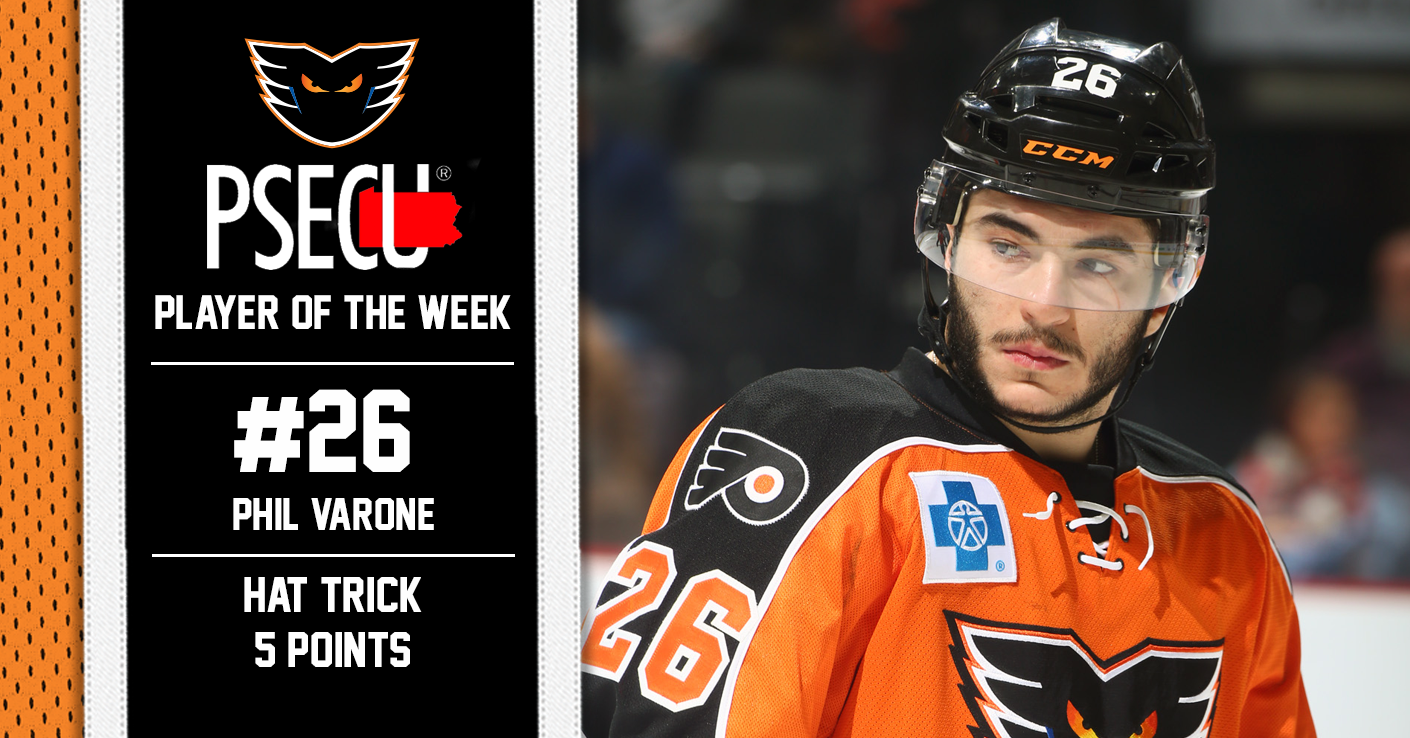 LEHIGH VALLEY — After scoring a hat trick this past Wednesday night and notching two additional assists for five points over three games this past week, Lehigh Valley Phantoms forward Phil Varone has been named the PSECU Player of the Week for the second time this season.

The Phantoms kicked off this past week’s New York road trip with a game against the Utica Comets on Wednesday night, and, as the team took to the ice where the 2018 AHL All-Star Classic was held, it was Varone who turned in an all-star performance during the midweek contest.

Early in the first period, at the 4:39 mark, Varone found a rebound in front — after TJ Brennan deflected a point shot from James de Haas — that he promptly potted to give Lehigh Valley a 1-0 lead over the Comets.

Utica would come back to tie the game at 1, but midway through the second period Varone would net another. The 27-year-old center collected a home-run pass from defenseman Will O’Neill and charged in on the left side of the ice towards Comets’ goaltender Thatcher Demko.

Varone lasered a shot past Demko’s glove side and into the net for his second of the night and 16th goal of the season. His goal again gave the Phantoms a lead, this time at 2-1.

After the seesaw battle of scoring continued throughout the second and third period, the Phantoms found themselves in a 4-4 tie with the Comets past the halfway point of the final frame. Varone would play the hero as he scored the game-winning goal and completed the hat trick — the first of his professional career — with less than six minutes remaining in the game. Lehigh Valley would go on to win the game 6-4.

After dropping a contest on Friday night against the Syracuse Crunch, the Phantoms rebounded with a 2-1 win over the Binghamton Devils on Saturday evening.  Varone recorded an assist on Greg Carey’s 23rd goal of the season, giving him 56 points (17G-39A) which remains the best in the entire American Hockey League.

With 4 points in Wednesday night’s game against Utica, Varone now has 12 multi-point games this season, more than any other Phantoms player this season.