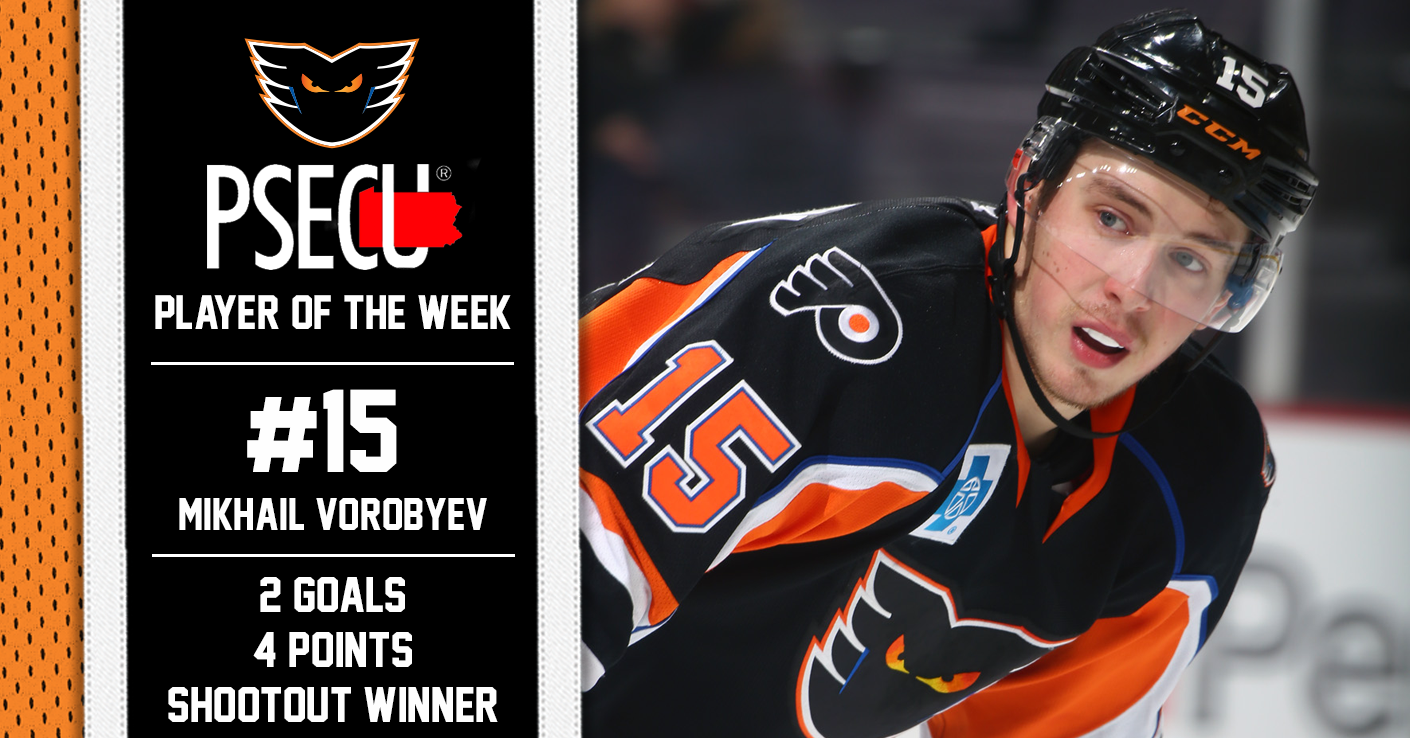 LEHIGH VALLEY — After scoring a pair of goals and tallying two assists for four points — as well as netting the shootout winner in Sunday night’s 3-2 victory over the Hershey Bears — this weekend, Lehigh Valley Phantoms forward Mikhail Vorobyev has been named the PSECU Player of the Week for the first time this season.

Heading into this weekend’s three-in three — that included a contest against Binghamton sandwiched between a home-and-home series against the Hershey Bears — the Phantoms remained in first place of the American Hockey League’s Atlantic Division.

Friday night’s wild affair between the Phantoms and the Bears saw Lehigh Valley make a dramatic comeback, erasing a four-goal deficit in the process, to claim a 7-6 victory over their rivals.  Vorobyev managed a helper on the team’s second goal which went on to spur the epic comeback.

On Saturday, Lehigh Valley hosted the Devils inside of PPL Center in downtown Allentown.  Vorobyev assisted on the Phantoms’ first goal of the game — a power-play goal tipped in by Phil Varone that would go on to be the eventual game-winner — and then later scored his sixth goal of the season to make it 4-0 for the black and orange.

Goaltender Dustin Tokarski made 29 saves during the game to earn his third shutout of the season as the Phantoms took a 4-0 decision.

The Phantoms hit the road for a Sunday-night game against the Bears in Hershey to complete the two team’s 12-game regular season series.

In a much tighter game than Friday night, the Phantoms found themselves down 2-1 just five minutes into the second period of play.  Later in the same period, at the 13:56 mark, Vorobyev would have a centering feed from behind the net come to his stick in the high slot. The 21-year old out of Ufa, Russia, would promptly rifle the puck into the top, left-hand corner of the net to tie the game up at two heading into the final frame.

After a scoreless third and overtime period, the game headed into the shootout.

With the first two shooters for each team failing to convert, Hershey’s Joe Whitney potted a goal in the top of the third round putting the pressure onto the Phantoms.  Corban Knight — using the same move he scored with on a shorthanded breakaway earlier in the game — scored again to keep the Phantoms hopes alive.  After a scoreless fourth round, the Bears’ Riley Barber was denied on a chance by Phantoms’ goaltender John Muse, setting the stage for Vorobyev to play the hero.

With the game on his stick, the rookie picked up the puck and center ice and skated in placing a shot through the five hole of Hershey goaltender Pheonix Copley, giving the Phantoms a 3-2 victory and capping the weekend’s games off with the team’s third win and fourth in a row.

Vorobyev has now amassed seven goals and 13 assists for 20 points over 44 games this season.

With the two wins this weekend, the Lehigh Valley Phantoms completed their season series with the Hershey Bears, the team was 10-2-0-0 against their rivals.