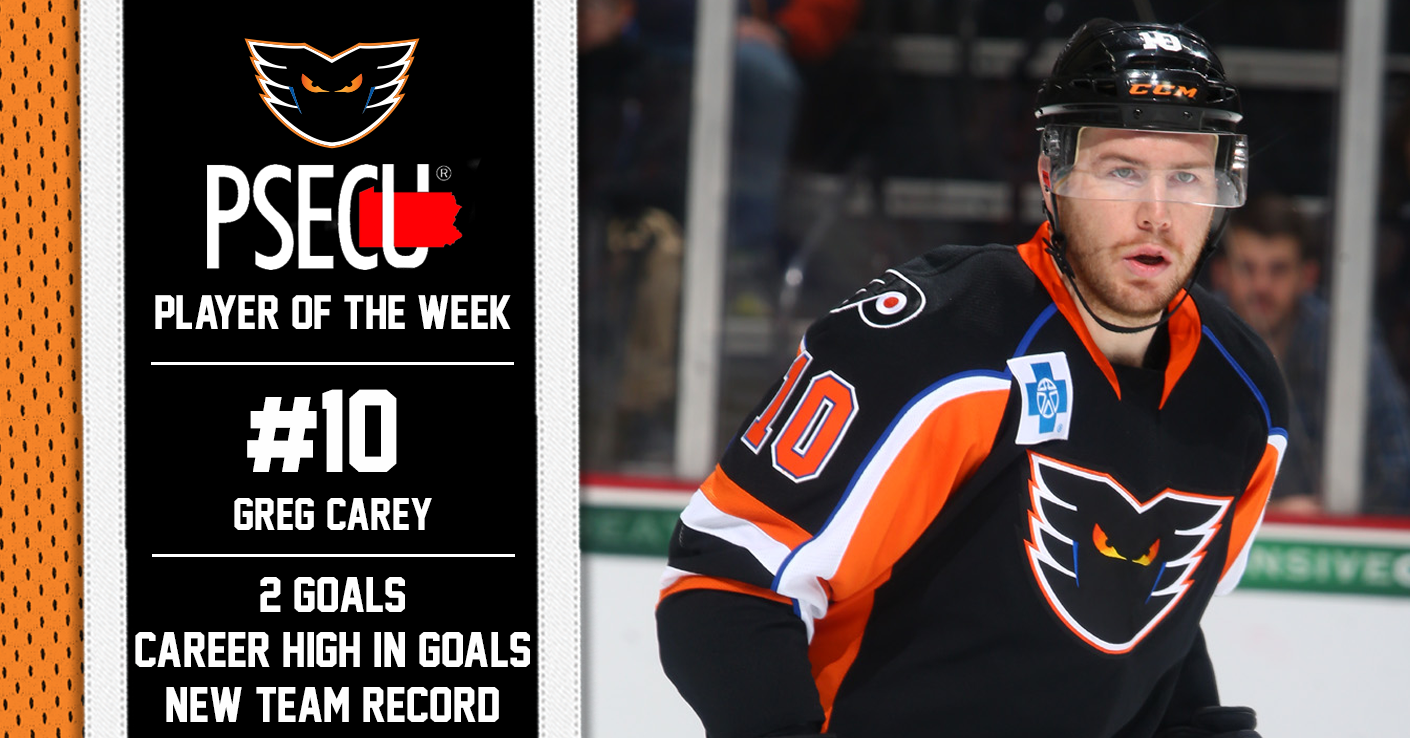 LEHIGH VALLEY — After netting a pair of goals this weekend — including the game-winner against Providence on Friday — and setting a new team record for goals in a season, Lehigh Valley Phantoms forward Greg Carey has been named the PSECU Player of the Week for the third time this season.

The playoff-bound Lehigh Valley Phantoms hit the ice inside of PPL Center for two games this past weekend, including a divisional match up against the Providence Bruins and a contest against the Ottawa Senators affiliate from Belleville.

Although the first period of Friday’s game was scoreless, the Phantoms would break through just 3:26 into the middle stanza after Carey rifled a one-timer home off of a set faceoff play.  Phil Varone — who is still currently leading the league in points with 67 — won a draw back to defenseman Will O’Neill who, in turn, promptly teed it up for Carey.

The goal, Carey’s 29th of the season, set a new team record for goals in a season by any Phantoms’ player during the teams four year tenure in the Lehigh Valley. The 27-year-old winger’s new record surpassed the previous record of 28 set in the 2016-17 season by none other than Carey himself.

T.J Brennan added another tally late in the third and Dustin Tokarski slammed the door making 22 saves as the team shutout the Bruins 2-0.  Carey earned third-star honors for his game-winning marker as the team topped Providence for the third time this season.

On Saturday, Carey would again net the first goal of the contest, this time at the 12:10 mark of the first period, when he received a pass, skated into the zone on the left wing and fired a shot from the top of the circle that went through Senators’ goaltender Marcus Hogberg to give the Phantoms a 1-0 lead.

The Hamilton, Ontario, native’s 30th goal of the season, adding to his already new career-high, now has him tied for second place in the American Hockey League in goals scored behind only Valentin Zykov of the Charlotte Checkers.

This also marks the first time a Phantoms’ player has found the back of the net 30 times since Jonathan Matusmoto accomplished that feat with the Adirondack Phantoms during the 2009-10 season. Carey is now the 16th Phantoms in franchise history to hit the 30-goal mark in a single season.

The last time that a Phantoms’ player had more than 30 goals was in 2004-05 when Jon Sim netted 35 during the Phantoms’ 2005 Calder Cup Championship season.