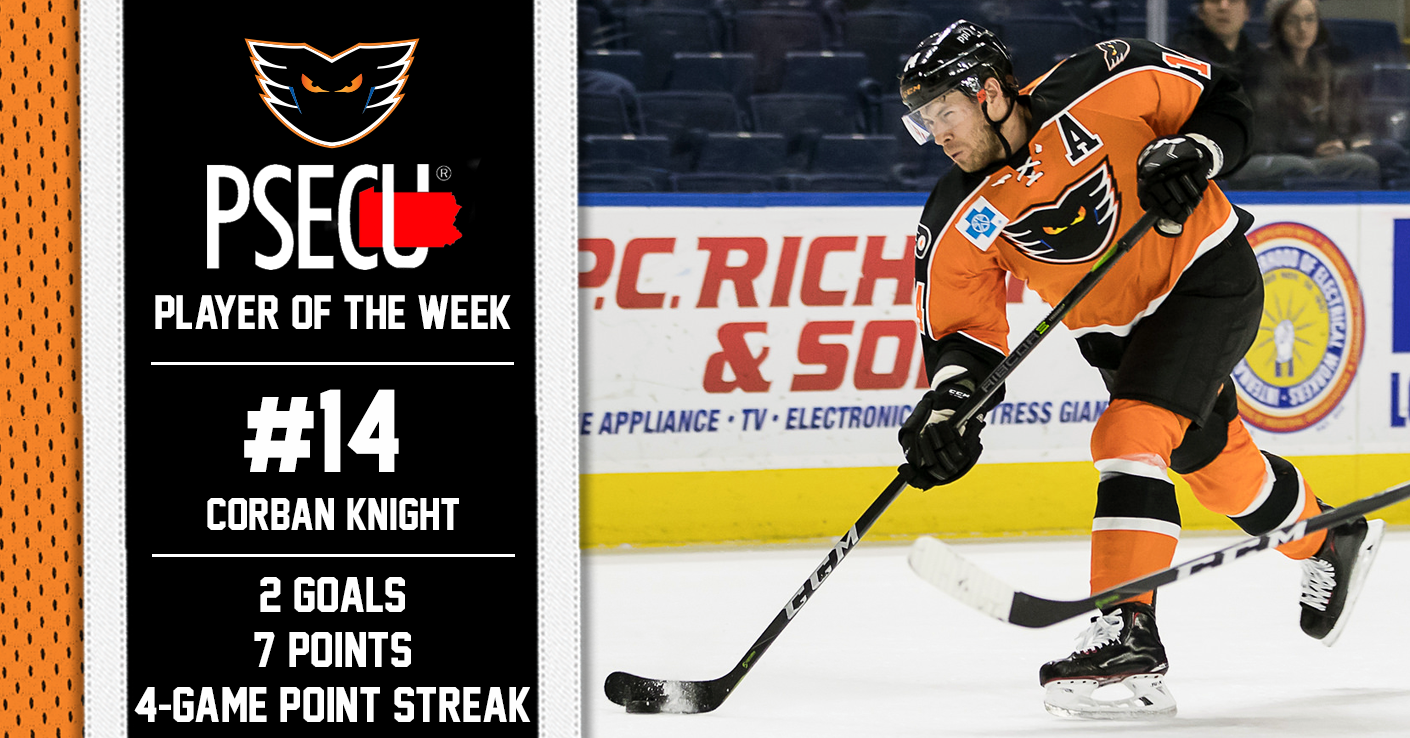 LEHIGH VALLEY — With two goals — including an overtime game winner on December 17 — and seven total points in four games this past week, Lehigh Valley Phantoms forward Corban Knight has been named the PSECU Player of the Week for the second time this season.

The Phantoms kicked off this week with a back-to-back set of games against the Charlotte Checkers on Tuesday and Wednesday nights.

Knight assisted on Lehigh Valley’s first goal of the game on Tuesday that came just 21 seconds into the contest when Aube-Kubel banked one in off of Charlotte goaltender Alex Nedeljkovic.  Minutes later — at the three-minute mark of the first period — Knight again dished, this time to Martel, for his second assist of the game.

The 27-year-old center from Oliver, British Columbia, followed up his multi-point performance in Tuesday’s 6-3 win over Charlotte with another assist in Wednesday night’s 5-2 loss.

Returning home on Saturday, the Phantoms found themselves matched up against one of the hottest teams in the American Hockey League in the Syracuse Crunch, winners of — at that point — 10 consecutive games.

Knight netted Lehigh Valley’s second goal of the game when he deflected a Will O’Neill point shot past Connor Ingram to give the Phantoms at 2-1 lead over the red-hot visitors.

Later, in the games third period, Knight found himself on a two-on-one with Martel and connected with him on a pass that left the net nearly wide open.  Martel’s 16th goal of the season gave the Phantoms a 4-2 win, moving the Phantoms to 2-1-0 on the week.  Knight was also named the first-star of the game for his performance.

As if those accolades weren’t enough, Knight just wasn’t quite done yet.  On Sunday, when the team traveled to Bridgeport for an afternoon game, he again earned himself first-star honors recording an assist and the overtime game winner in a 3-2 victory.

Knight collected a pass from defenseman T.J. Brennan, skated down the right wing and teed up a slapshot that whizzed past goaltender Christopher Gibson just 42 seconds into the overtime period.  The goal was the 5th-year pro’s first game winner of the season for the Phantoms and capped off a week that saw him register three multi-point games, giving him six total during the 2017-18 campaign.

Knight now has 12 points (5G-7A) in his past 10 games and has recorded a plus-minus rating of plus-9 during those contests.