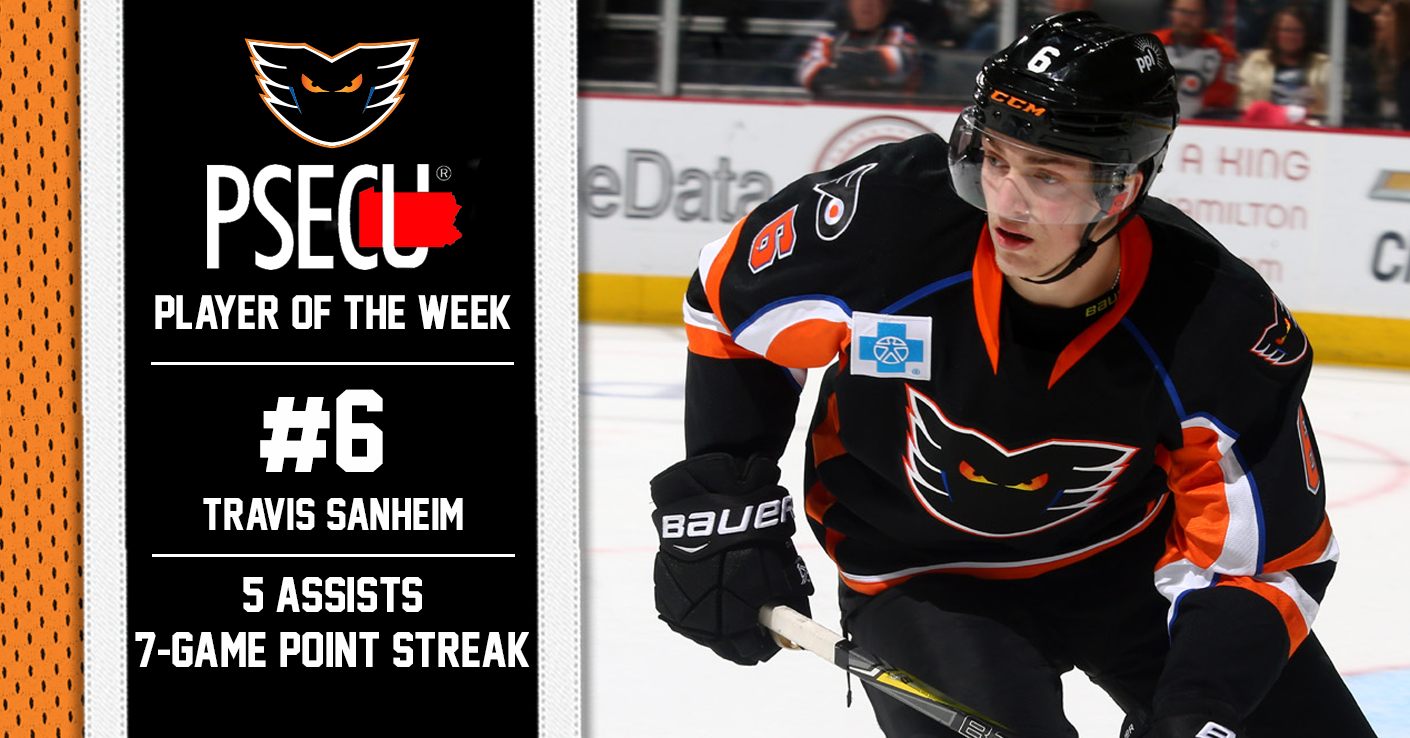 LEHIGH VALLLEY — While currently riding a seven-game point streak — with a goal and 10 assists —  and after amassing five assists during this past week’s four games, Lehigh Valley Phantoms defenseman Travis Sanheim has been named the PSECU Player of the Week.

Since returning to the Phantoms lineup on January 24, after starting the season with the Philadelphia Flyers, the 21-year-old blue liner has tallied 13 points (1G-12A) over his first 12 games at the AHL level. He has also recorded an impressive plus-11 rating over those games, placing him second among defensemen on the team.

After the team scored a 5-0 victory over the Bridgeport Sound Tigers on Tuesday, the Phantoms traveled to Springfield on Friday to face off against the Thunderbirds. New England opponents were again put on notice as Lehigh Valley took home an impressive 8-2 win that included two power-play goals during the offensive onslaught that saw the team move into first place in the Atlantic Division.

Sanheim, who extended his point streak to four games in Bridgeport, would again find a way to assist on the scoresheet when he connected with Nic Aube-Kubel for an easy shot that would put the Phantoms up 7-1 in the early part of the third period.

In Saturday night’s game against the Hartford Wolf Pack, Oskar Lindblom became the benefactor of Sanheim’s offensive prowess. With less than 10 minutes to play in the first period, Sanhiem ripped a shot from center point that knocked off of Lindblom and into the net for the Phantoms second goal of the game.

The Elkhorn, Manitoba, native would tack on another helper in Sunday night’s contest against the rival Wilkes-Barre/Scranton Penguins when a shot of his would ricochet off Penguins’ goaltender Casey DeSmith and into the capable hands of Mike Vecchione.  Vecchione promptly caught the puck out of the air and tossed it to the ice before depositing it into the net over the right shoulder of DeSmith making it 3-0 for the Phantoms.  Lehigh Valley would cap off the weekend with another victory, winning 4-1 over the Pens.

Sanheim has now recorded three multi-point games in his first 12 games with Lehigh Valley this season.