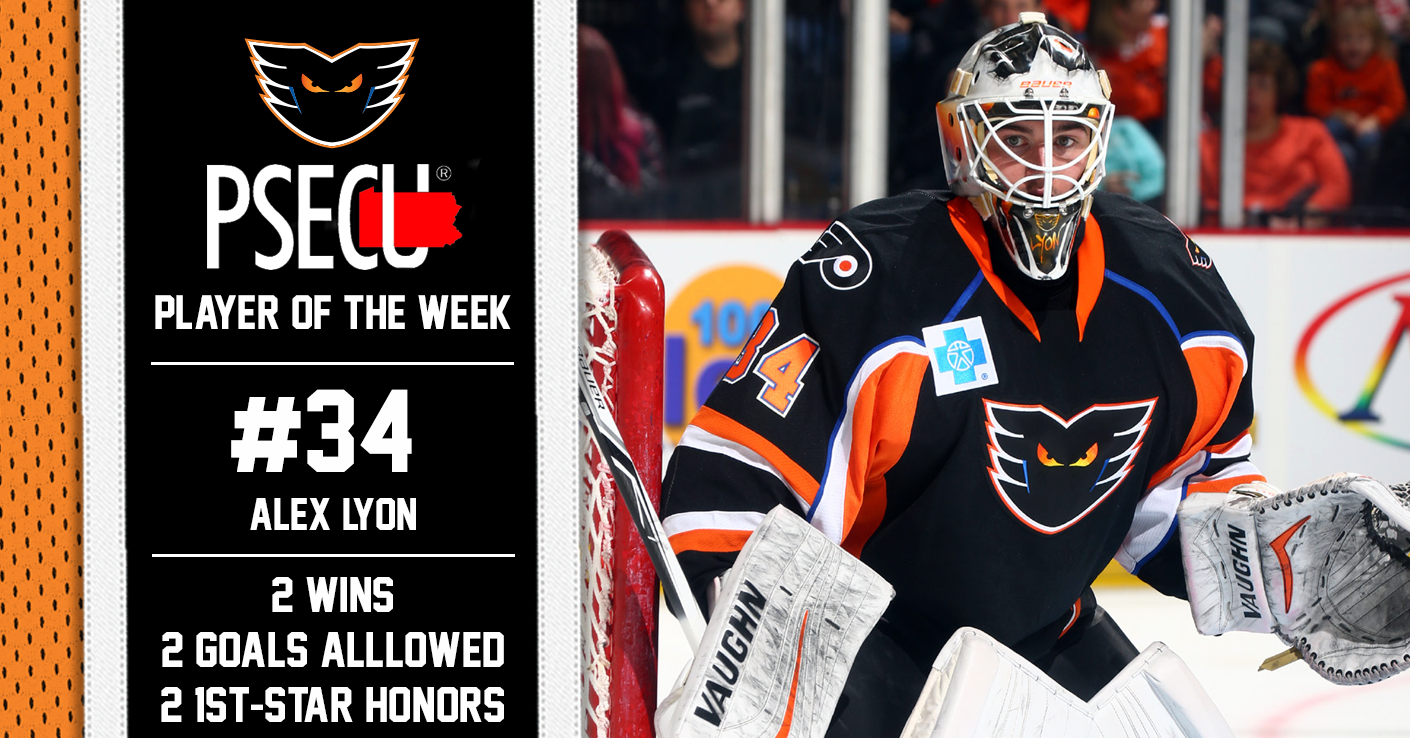 LEHIGH VALLEY — After a week that saw him post two wins, allow just two goals in those wins and get called up to the Flyers, Lehigh Valley Phantoms goaltender Alex Lyon has been named the PSECU Player of the Week.

The Phantoms began the week with a Wednesday contest against the only Atlantic-Division opponent they had yet to play this season, the Providence Bruins.  Lehigh Valley came out of the gate red hot, netting two goals in the first period and another about halfway through the third period.

Lyon — who was coming off his most recent win in the 2018 AHL Outdoor Classic where he made 41 saves — kept the Bruins off of the scoreboard for the majority of the game, having turned aside 19 shots through two periods of play.

Late in the third, Providence would finally break through, but would fall short in their comeback attempt.  At game’s end Lyon had made 30 saves to secure his third consecutive victory, which earned him first-star honors.

On Thursday, an injury to Philadelphia Flyers goaltender Brian Elliot prompted the Phantoms’ parent club to recall Lyon to serve as a backup for the team’s game against the Tampa Bay Lightning.  This would be the netminder’s second call to the NHL of the season.

With the Flyers headed into the NHL All-Star Break, the 25-year-old goalie from Baudette, Minnesota, was returned to Lehigh Valley in time for Friday night’s contest against the rival Wilkes-Barre/Scranton Penguins.

While head coach Scott Gordon started goaltender Dustin Tokarski in that game, Lyon would replace his teammate in net after just 6:26 of play in the first period.  With the team down 2-1, Lyon took command of the game and played the remaining 53:34, shutting the door on the Penguins by stopping all 26 shots that were directed at him.

The Phantoms rallied and scored four unanswered goals to take a 5-2 decision against their divisional foes.  The win would propel the young netminder’s record to 13-8-2 on the season and see him post a .966 save percentage as well as a 1.06 goal-against average over his two games played this week.  Lyon again earned first-star honors for his performance between the pipes.