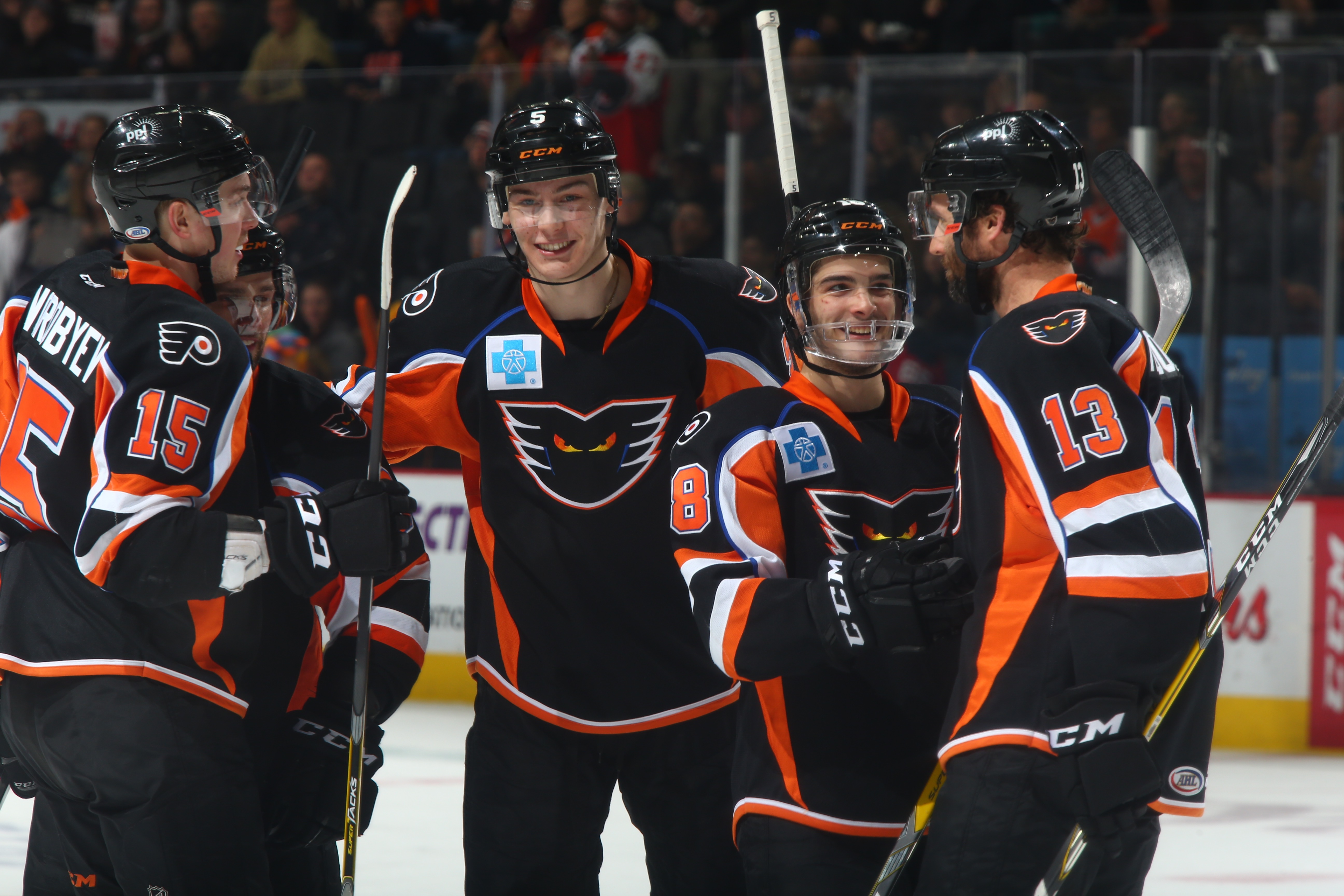 Lehigh Valley, Pa. – Mike Vecchione (15th) broke a 3-3 tie in the final minute of regulation Sunday as the Lehigh Valley Phantoms outlasted the Binghamton Devils 5-3 in front of 7,395 fans inside PPL Center. With the win, the Phantoms became just the AHL’s second team to reach the 40-win mark this season as Lehigh Valley improved to 40-16-3-4 overall this year. 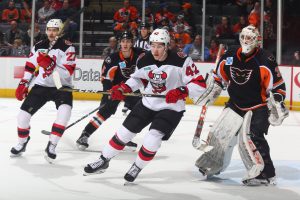 With Sunday’s victory, the Phantoms trimmed their magic number to clinch a berth in the 2018 Calder Cup Playoffs down to just 12 standings points.

Phil Varone (19th), Cole Bardreau (8th), Mikhail Vorobyev (8th), and Will O’Neill (6th) also found the back of the net for Lehigh Valley in front of goaltender Dustin Tokarski who improved to 16-7-5 overall this season after turning aside 23 of Binghamton’s 26 total shots. Bardreau’s goal was part of a multi-point evening as the 24-year-old forward registered a goal and an assist and has now produced three goals, four assists and seven points over his last six contests. Meanwhile, Vorobyev’s marker continued his solid play in recent weeks as the first-year pivot has now amassed three goals, four assists and seven total points across his last six outings as well.

Varone’s conversion marked a new career-high for goals in a single season as the 27-year-old center increased his team-leading and league-leading point total to an impressive 62 total points (19 goals, 43 assists). 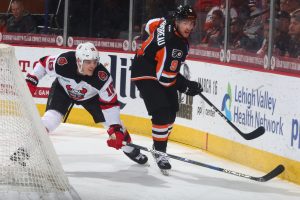 Colin McDonald and Reece Willcox also chipped in a pair of assists each in the victory as the Phantoms ended the year an impressive 5-1 head-to-head against the Devils.

The Phantoms opened the scoring just over three minutes into the contest when a perfect cross-ice pass by James de Haas connected with Bardreau at the right side of the net who promptly tapped in his eighth goal of the season. Radel Fazleev grabbed the secondary assist on the even-strength strike netted 3:19 into the first frame, which marked the 32nd time this season Lehigh Valley has landed the game’s opening conversion. The Phantoms are now 25-3-4 when landing the game’s first goal this year.

Binghamton responded quickly though and was able to level the contest less than three minutes later when Steven Santini’s shot from the right point was altered en route by Nick Lappin before settling in the back of the Lehigh Valley cage. Kevin Rooney earned the second assist on Lappin’s 24th goal this year, which came 6:08 into the first period.

The Devils then grabbed their first lead of the night just prior to the midway point of the second period when, while on the power play, John Quenneville snapped home his 11th goal of the season. Jacob MacDonald and Christoph Bertschy assisted on the man-advantage marker netted 9:41 into the middle frame. 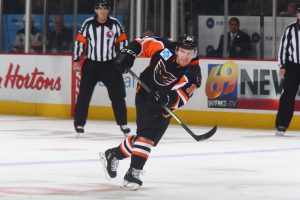 Lehigh Valley answered right back though with a power play marker of its own just over two minutes later. With Binghamton’s Jan Mandat and Josh Jacobs both in the penalty box, O’Neill was able to snap in a seeing-eye wrist shot from the right point for his sixth conversion of the year. Phil Myers and Danick Martel both garnered assists on the man-advantage marker tallied 11:56 into the middle stanza as the Phantoms converted their sixth power play tally over the last six games.

Lehigh Valley then grabbed the lead back a little over eight minutes into the third period when Willcox produced an opportunity in the slot that generated a rebound for Vorobyev who promptly slammed in his eighth goal of the season. Willcox and Nic Aube-Kubel assisted on the go-ahead tally netted 8:02 into the final frame of regulation.

The back-and-forth affair continued as Binghamton was able to level the contest once again when Lappin converted his second goal of the game and 25th this season with assists from MacDonald and Bertschy with just over six minutes left in regulation.

But the Phantoms simply weren’t to be denied and reclaimed the lead for good in the final minute of regulation when McDonald’s cross-ice feed deflected off Vecchione’s skate and into the back of the Devils’ net. Willcox claimed the secondary helper on the go-ahead marker tallied 19:01 into the third period.

Varone then added an insurance marker with just seven seconds left as Lehigh Valley capped its busy weekend with the team’s second win in three games.

The Phantoms are back in action for a pair of games at PPL Center next weekend. First, on Saturday, March 17, Lehigh Valley welcomes the Providence Bruins to downtown Allentown for a 7:05 p.m. clash. Then, on Sunday, March 18, the Phantoms host the Springfield Thunderbirds in a 3:05 p.m. tilt at PPL Center. Sunday’s game features a Phantoms Wall Cling Giveaway to the first 2,000 kids 14 and under presented by PSECU. A limited number of tickets remain for Saturday and Sunday’s games adn are available HERE.