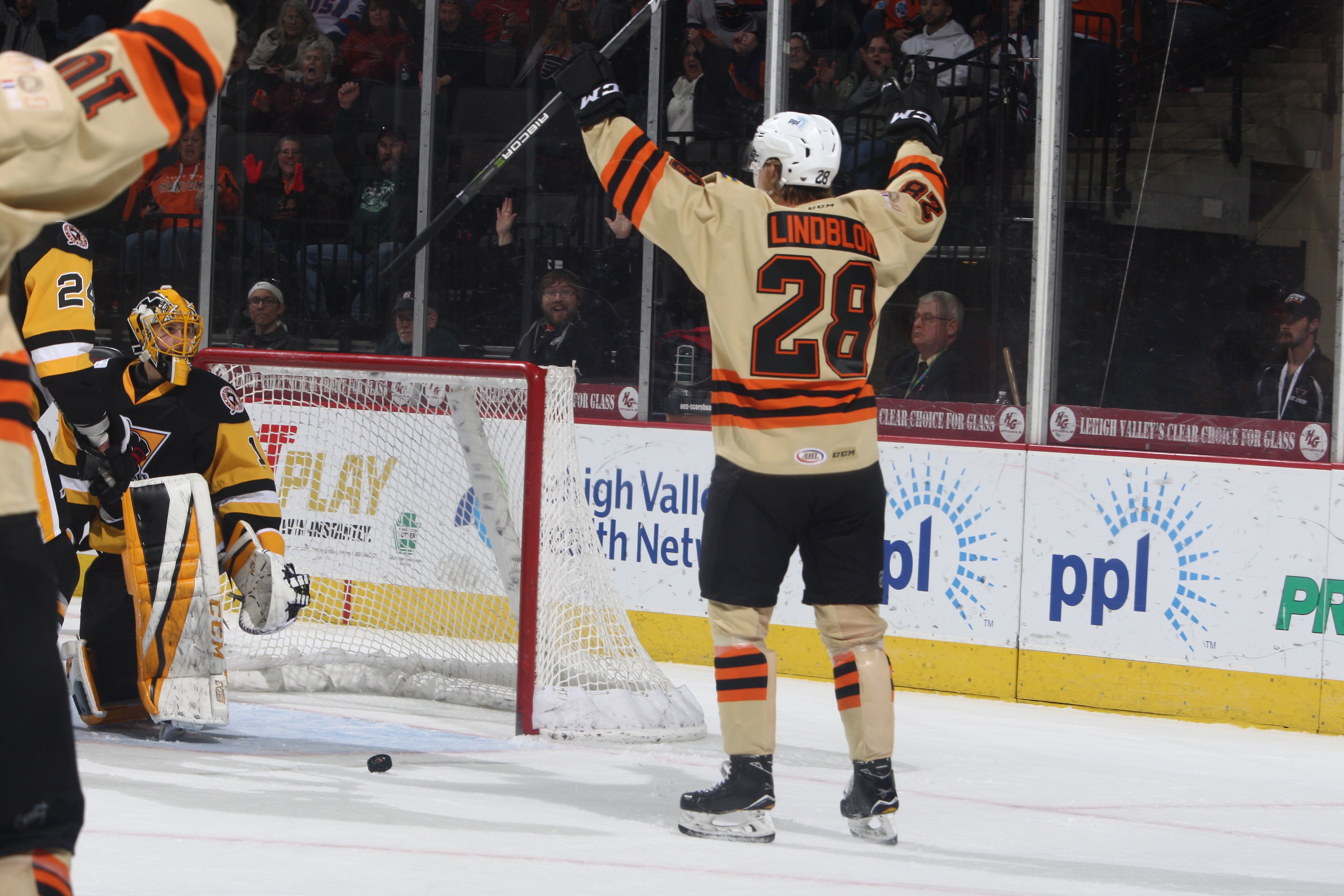 Lehigh Valley, Pa. – John Muse turned in a strong effort with 22 saves including a handful of showstoppers in leading the host Phantoms to a 4-1 triumph over the Wilkes-Barre/Scranton Penguins on Sunday evening at PPL Center. Lehigh Valley extended its point streak to seven and the current home point streak to ten as they also successfully broke a bit further away from the pack in the Atlantic Division race.

Oskar Lindblom (16th) and Phil Varone (14th) each scored in their third consecutive games. Mike Vecchione (13th) tacked on another and Matt Read (6th) sealed the win with an empty-netter. Travis Sanheim notched a pair of assists to stretch his current point streak to seven games through which he has recorded one goal and ten assists for 11 points.

Varone’s goal was also good for his 51st point of the season placing him in a tie for the AHL leadership with Andrew Miller of the Charlotte Checkers. 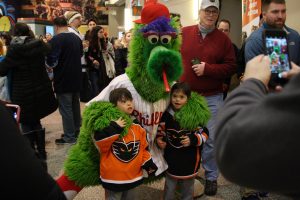 An excited and enthusiastic crowd of 8,499 fans converged to the corner of Seventh and Hamilton in the 11th home sellout of the season for the Lehigh Valley Phantoms while celebrating meLVin’s Big Birthday Bash with all his mascot friends. meLVin was welcomed by a full compliment of fellow mascots including the Phillie Phanatic, Cocoa and Tux from Hershey and Wilkes-Barre, Ferrous and FeFe from the Lehigh Valley Iron Pigs and many more.

The Phantoms improved to 33-14-7 overall for 73 points at the 54-game mark with just 22 games to go in the regular season. The Phantoms are 6-0-1 in their last seven games and have outscored the opposition by a gaudy margin of 33-13 in the stretch. Lehigh Valley also boasts a mark of 8-0-2 in its last 10 home contests dating back to January 13.

The three teams immediately closest to the Phantoms in the standings all took Sunday setbacks in what turned out to be an extremely productive evening. Second-place Wilkes-Barre/Scranton, third-place Providence and fourth-place Charlotte all took losses on the same day.

It was 29-year-old John Muse who garnered the bulk of the attention through the night with several spectacular saves delighting the vocal fans at PPL Center who gleefully chanted “MOOOSE” for each of his best stops. The recent call-up from the Reading Royals has gone 5-1-0 with the Phantoms this year and seems perfectly comfortable with his newest AHL team. The former Charlotte Checker and Rochester American is settling in nicely before the big crowds at PPL Center.

“It’s awesome playing in front of so many people every night,” Muse said. “And it’s been a lot of fun so far.”

Muse took the reigns for his second game of the weekend and his quality performance between the pipes not only thrilled the fans but also caught the attention of head coach Scott Gordon.

“John’s played great,” Gordon noted. “I don’t think we could ask him to play any better. He’s been terrific in the six games that he’s played.” 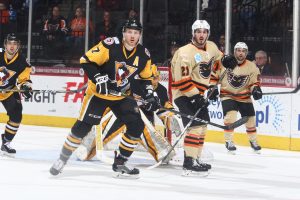 The game also marked the PPL Center return of the mega-popular Danick Martel in his first home game since a frightening broken jaw injury on January 13th in a game against Hershey. The diminutive and feisty goal-scoring talent found himself in a couple of scuffles and got his nose dirty a couple of times just like he did before his layoff.

“I might have been scared for the last month that I wouldn’t play the same way,” Martel said of his recovery process and mentality. “But I think just getting hit and see what happens. I feel good. I’m not scared anymore and I’ll play like that.”

That’s the kind of role that Martel can’t help but play.

“He’s fearless,” Gordon said. “We’re obviously glad to have him back. That gives us a lot of depth especially with juggling the vets. To be able to put in a 19-goal scorer is a good substitution for us.”

Sporting specialty “Go For Gold” jerseys featuring the home nation flag of each respective player, the Phantoms and Penguins traded glorious chances through the opening minutes of the entertaining contest.

Lehigh Valley broke through 15 minutes into the contest after Greg Carey was robbed on a big power-play blast from the right dot by Penguins goaltender Casey DeSmith. Carey received his own rebound and tried to pass across to Matt Read but the puck instead bounced off the leg of a Penguins penalty killer and back to Lindblom on the right side of the crease who converted on the tap-in.

The Phantoms doubled their lead in the opening two minutes of the second frame with Carey’s pass from the corner deflecting this time out to Phil Varone in the slot who shot for the left post and scored for a third straight day. Sanheim received his first assist of the game on the play that pushed the Phantoms margin to 2-0.

At 11:54 into the second period it was Sanheim again setting up a goal. The Flyers first-round selection in 2014 cranked up a power-play slapper from center point that was saved off the right shoulder of DeSmith but the carom streaked high into the air and to the awaiting right hand of Vecchione in the slot. The rookie center quickly grabbed the puck and dropped to his stick to offer a rapid put-back which he successfully lasered to to the upper-left corner. Misha Vorobyev also assisted on the play as the Phantoms took a 3-0 lead into the second break. 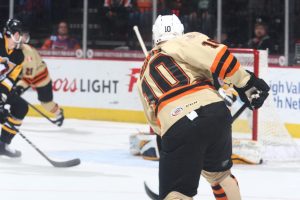 Both teams were down a man at the eight-minute mark of the third period when the Penguins were threatening 4-on-4. Jared Tinordi’s left-point slapshot was deflected in front of the cage by fourth-year center Jean-Sebastian Dea on the doorstep to break Muse’s bid for a shutout. The goal came just as Colin McDonald re-entered the scene from the penalty box and went as just the third shorthanded goal the Phantoms have allowed this season, the fewest in the AHL.

Daniel Sprong attempted to pull the Penguins even closer with his blast from the left-wing that ricocheted off the inside of the right post and back across the goal-line. Muse somehow spotted the perilous situation and fell onto his back to somehow snag the puck in his left arm just inches from being a goal in what was one of his more spectacular saves of the evening.

Lehigh Valley eventually emerged with the puck for an empty-net goal with 1:54 remaining when Corban Knight from the bench-boards spotted Matt Read open through the neutral zone. Read’s goal was also good for his second point the night and came 4-on-6 for the Phantoms so also qualifies as Lehigh Valley’s sixth shortie of the 2017-18 campaign.

The Phantoms improved to 6-4-1 against their rivals from Northeast Pennsylvania in the fiercely contested battle that involved several scraps and scrums between two top-tier teams who clearly weren’t bashful about expressing their distaste for one another.

The Phantoms hit the road for three straight games in a New York State of Mind road-trip this week beginning with a Wednesday sojourn to the Utica Comets who are currently riding a 15-game point streak. Lehigh Valley’s travels continue to the Syracuse Crunch on Friday and then to the Binghamton Devils on Saturday.