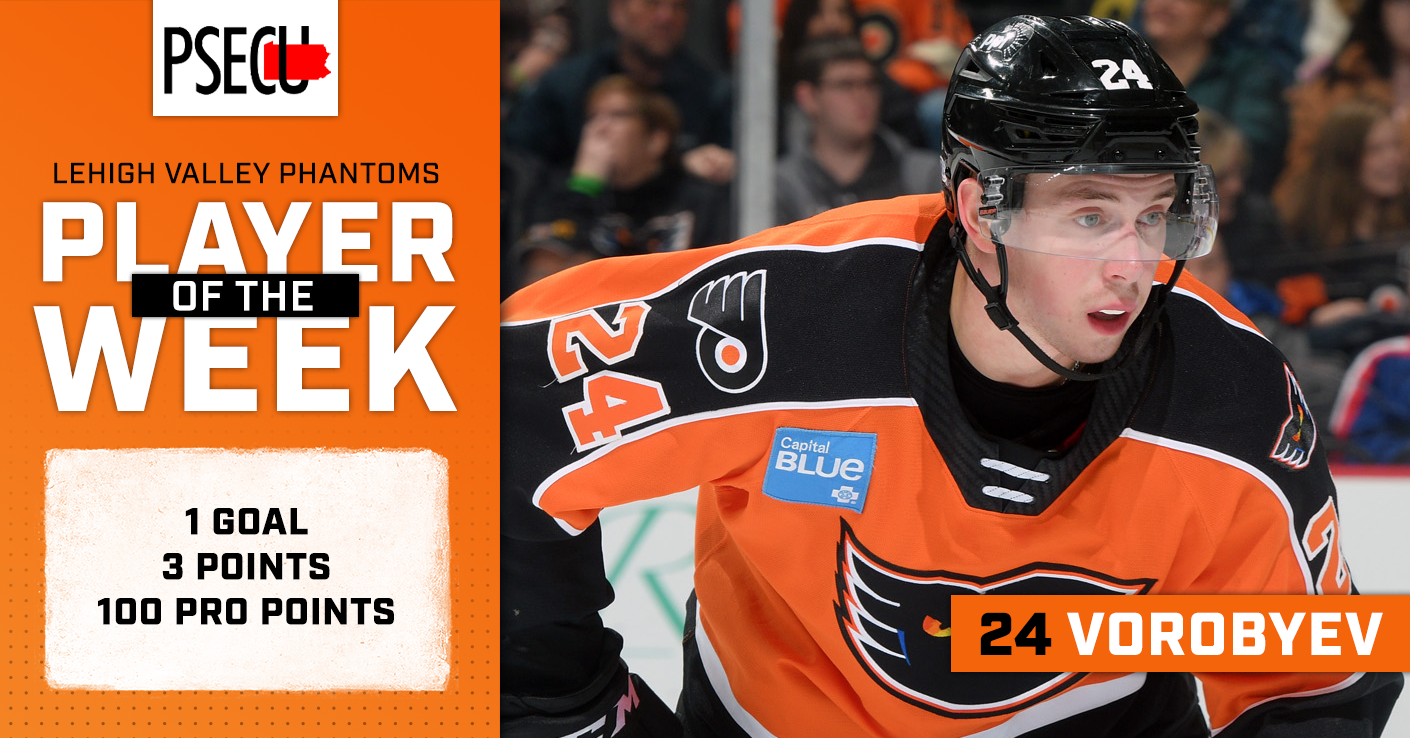 Lehigh Valley, Pa. — With a goal and two assists for three points as well as reaching the 100-point mark (35G-66A) of his professional career in Sunday’s game against the Bridgeport Sound Tigers, Lehigh Valley Phantoms forward Mikhail Vorobyev has been named the PSECU Player of the Week.

After dropping a home and road contest to begin a three-in-three weekend, the Phantoms returned home to rematch against the Bridgeport Sound Tigers on Sunday, March 8.

Although Bridgeport got on the board first, Lehigh Valley tied the game back up when Gerry Fitzgerald found the back of the net on a wrap-around, and then took a 2-1 lead over their opponent as Reece Willcox netted his second marker of the 2019-20 season.

Later in the first period, with the Phantoms on the penalty kill due to a too-many-men call, Vorobyev started up the ice in a two-on-one rush with Isaac Ratcliffe.  As the two skated in, Vorobyev dished a saucer pass over the stick of a Bridgeport defender and across to Ratcliffe who slammed it home for his sixth goal of the season.  The shorthanded marker was Lehigh Valley’s ninth and, with an assist on the play, marked Vorobyev’s fourth shorthanded point (2G-2A) this season, giving him the team lead in that category.

Having already assisted on Fitzgerald’s goal earlier in the game, Vorobyev’s 26th point of the season marked the 100th of his professional career.

The Sound Tigers tallied a late power-play goal with just 1:06 remaining in the opening frame, sending the two teams to the locker room with the Phantoms leading 3-2.

Vorobyev wasted little time finding the scoresheet again in the middle frame as he pushed the Phantoms lead to 4-2 just 3:13 into the second period with his 12th goal of the season.

Defenseman Tyler Wotherspoon was able to keep a puck in on the left-wing boards before shoveling it off to forward Max Willman.  Willman, in turn, passed it to an open Vorobyev who drove to the net and ripped a backhand shot that went in and out of the net.

Despite having a lead over the Sound Tigers, the Phantoms would drop Sunday’s game 6-5 in a shootout.

Vorobyev now ranks fourth on the Phantoms in points with 27 (12G-15A) across 44 games this season and has a plus-8 rating as well.