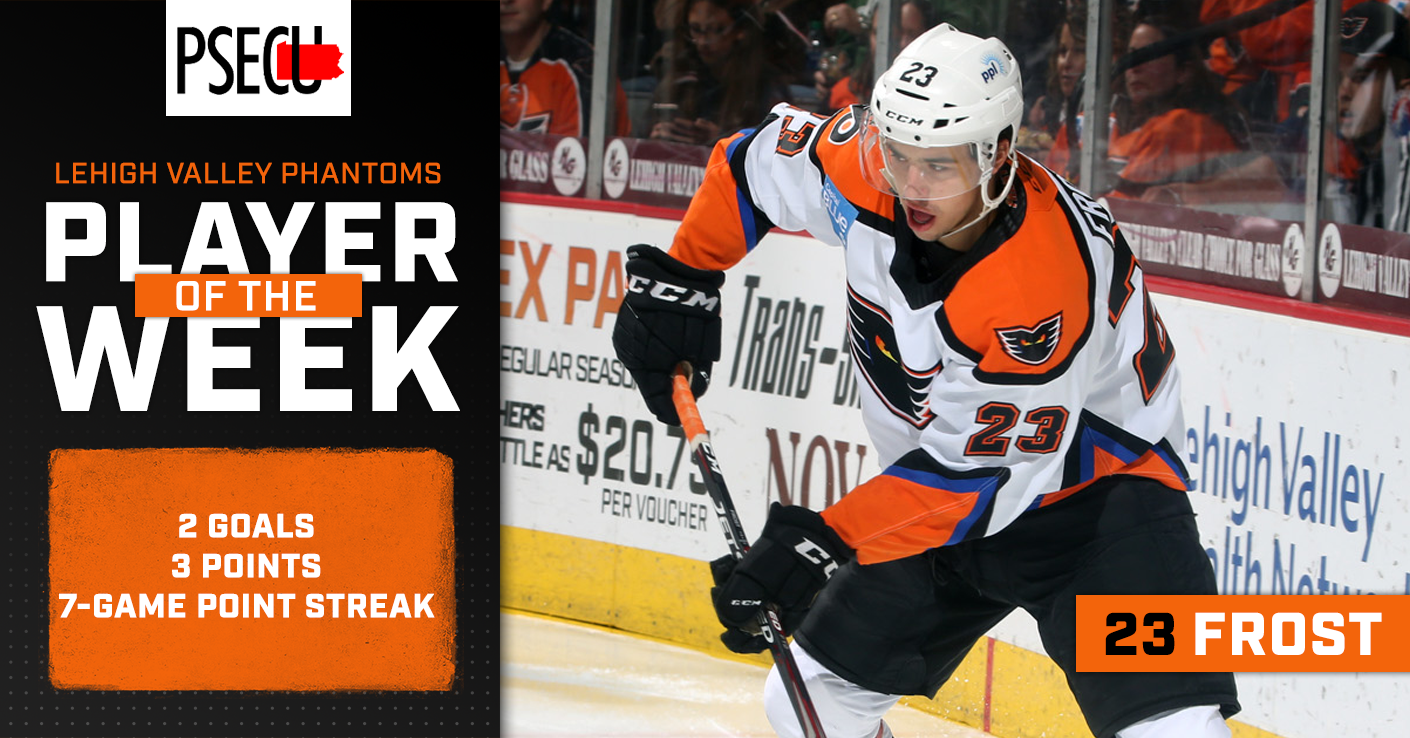 Lehigh Valley, Pa. — After extending his current point streak to seven games while netting two goals and collecting three total points in three games this past weekend, Lehigh Valley Phantoms forward Morgan Frost has been named the PSECU Player of the Week for the second time this season.

The Phantoms faced the team’s first three-in-three weekend of the season beginning with a rivalry game against the Wilkes-Barre/Scranton Penguins on Friday night inside of PPL Center.

Despite being down 3-0 in the early going of the second period, the Phantoms battled back with three consecutive goals to send the game into overtime and an eventual shootout.  Lehigh Valley’s second goal of the game, which was scored at the 1:43 mark of the third period, came on a power play when Morgan Frost made a pass from the half boards to a waiting Greg Carey in the slot.  Carey would fire a shot that caused a rebound which was immediately put back by Andy Andreoff.

With an assist in the contest, Frost stretched his point streak to five games.  The Phantoms, who dropped the game in the shootout, also extended their team point streak to seven games.

On Saturday, Lehigh Valley traveled to Bridgeport to take on the Sound Tigers for the first time during the 2019-20 season.

After Kyle Criscuolo converted on an early penalty shot in the first period, the Sound Tigers found the back of the net twice to hold a 2-1 lead over the Phantoms midway through the middle frame.  5:52 after the second Sound Tigers’ goal, a reaching Frost deflected a Mark Friedman shot from the point into the back of the net to tie the game at 2-2 before the two teams headed into the locker rooms for the second intermission.

Frost again managed to extend his point streak, this time to six games, in which he had netted three goals and five assists for a total of eight points.

Lehigh Valley went on to defeat Bridgeport 3-2 in regulation thanks to a goal from Nic Aube-Kubel.

The two teams rematched inside of Webster Bank Arena on Sunday afternoon and found themselves in a 2-2 tie entering into the third period of play.

Nearly three minutes into the final frame, Frost collected a puck on the far boards inside of the Sound Tigers’ end and skated towards center ice, as the traffic moved with him he fired a shot to the top right-hand corner of the net to give the Phantoms a 3-2 lead over the opposition and extend his point streak to seven games, making it the third-longest active streak in the entire AHL.

The Phantoms eventually fell to the Sound Tigers by a score of 4-3 in regulation, marking just the second regulation loss of the season and first since October 5 against the Providence Bruins.

Frost now has four goals and five assists for a total of nine points across his past seven games.  His current point streak is the second-longest active streak by a rookie this season and Frost also ranks third overall in the AHL’s rookie scoring race.  What’s more, the Aurora, Ontario, native now leads the Phantoms in both goals (4) and points (9).