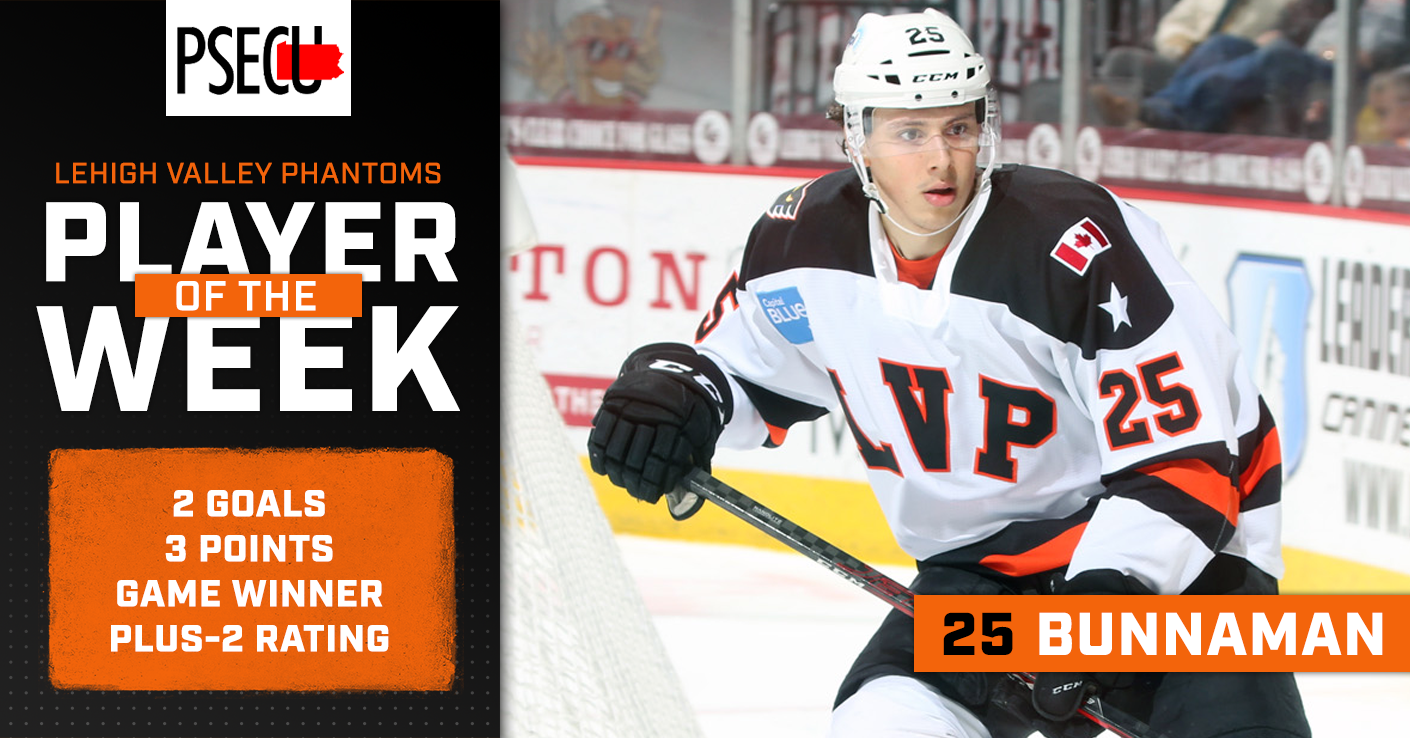 Lehigh Valley, Pa. — With two goals — one of which was a game winner — and an assist for three total points and a plus-two rating across two games this past weekend, Lehigh Valley Phantoms forward Connor Bunnaman has been named the PSECU Player of the Week for the second time this season.

After taking three of a possible six points on the road this past week, the Phantoms returned home to face a pair of games against the Charlotte Checkers on February 28 and 29 inside of PPL Center in downtown Allentown.

On Friday, Lehigh Valley found themselves in a 1-0 hole after an early goal by Charlotte just 3:32 into the contest.  The Phantoms answered back with three consecutive goals from of Cal O’Reilly, Andy Andreoff and a Checkers own goal that was credited to Maksim Sushko.  As the team headed into the third period, Lehigh Valley was leading 3-1.

Although Charlotte made it a one-goal game in the third period, Lehigh Valley again answered back as Bunnaman joined fellow forward Isaac Ratcliffe in a shorthanded 2-on-1 rush up the ice late in the third period. Ratcliffe skated into the Checkers’ zone on the right-wing side before dishing a saucer pass over to Bunnaman on the back door.  The second-year forward slammed the puck home to relclaim the Phantoms two-goal lead over the opposition.

Charlotte again made it a one-goal game on a power-play goal with under four minutes to play in the third period, but Bunnaman found the back of the net for the second time as he potted a long-distance empty-netter on the backhand to extend the Phantoms lead to 5-3.

Bunnaman earned first-star honors for his performance and raised his point total to seven (6G-1A) across 25 games with the Phantoms in 2019-20.

On Saturday night, Lehigh Valley rematched against Charlotte for the two team’s final meeting of the regular season.

The Checkers were holding onto a commanding 4-0 lead nearly halfway through the final frame before defenseman James de Haas went nearly coast to coast and potted the Phantoms first marker of the game at the 9:03 mark of the third.  Defenseman Andy Welinski and Bunnaman picked up the assists on de Haas’ second goal of the season.

Despite adding another goal late in the third with an extra attacker, Lehigh Valley fell to Charlotte 4-2.

Bunnaman now has six goals and two assists on the season for a total of eight points in 26 games with Lehigh Valley.  The Guelph, Ontario, native has also recorded two points (1G-1A) and a plus-seven rating in 21 games at the NHL level with Philadelphia this season.