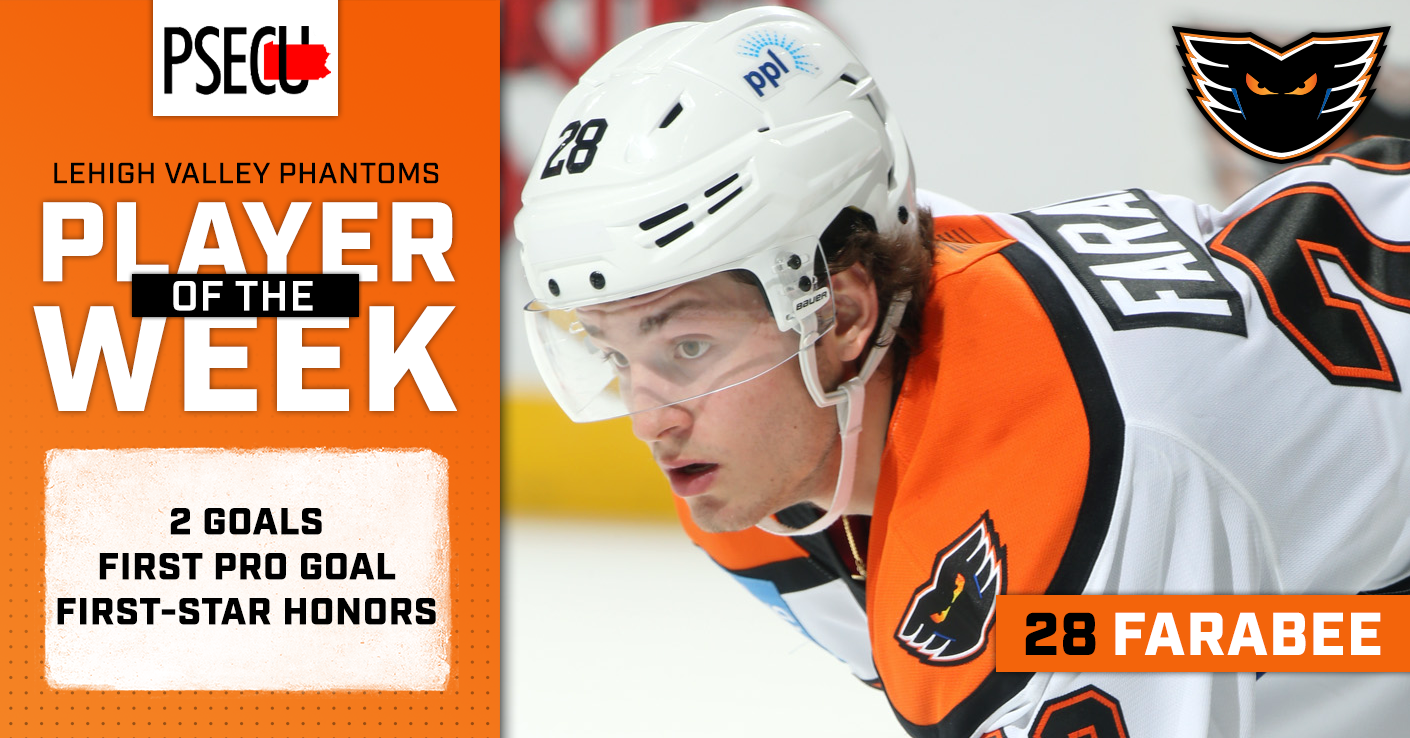 Lehigh Valley, Pa. — After scoring his first professional goal in dazzling fashion and finishing the weekend with two goals and first-star honors, Lehigh Valley Phantoms forward Joel Farabee has been named the PSECU Player of the Week.

The Lehigh Valley Phantoms faced off against two bitter rivals inside of PPL Center this past weekend, beginning with a game against the Wilkes-Barre/Scranton Penguins on Friday night.

After a first period that saw Kurtis Gabriel and Mikhail Vorobyev put the Phantoms ahead 2-0, the Penguins managed to cut the lead in half just 38 seconds into the middle frame with a power-play goal to make it 2-1.

Just 4:01 later, defenseman Philippe Myers spotted Farabee streaking up the ice and laid a highlight-reel pass out to the forward.  The puck hit Farabee in stride and, with one defenseman to beat, the 19-year-old pulled the puck to his left and through the legs of the defender before skating in alone on Penguins’ goaltender Casey DeSmith. With DeSmith frozen, Farabee skated to his left and put the puck past the sprawled-out netminder.

The goal marks the first of Farabee’s professional career and earned him first-start honors on the night.  Another marker from defenseman Chris Bigras, a little over a minute later, would seal the deal as the Phantoms earned their first victory of the season.

On Saturday, Lehigh Valley welcomed its other in-state rival, Hershey, to downtown Allentown for the first of 12 total meeting between the two teams.

Despite getting on the board first, thanks to rookie forward Maksim Sushko’s first professional goal, the Phantoms surrendered a shorthanded goal that tied the game up at the 5:35 mark of the first period.

Not to be outdone, the Phantoms retook the lead when Farabee netted his second of the weekend with just 6:57 remaining in the opening frame.  After Kyle Criscuolo intercepted a Hershey pass in the neutral zone, he skated down the right wing and dished a centering feed to a wide open Farabee who shot it into the top-left corner of the net.

Despite another goal from Isaac Ratcliffe, his first of the season, the Phantoms dropped Saturday’s contest in overtime by a score of 4-3.

With goals in back-to-back games, Farabee now has two points in just two games as a member of the Lehigh Valley Phantoms.