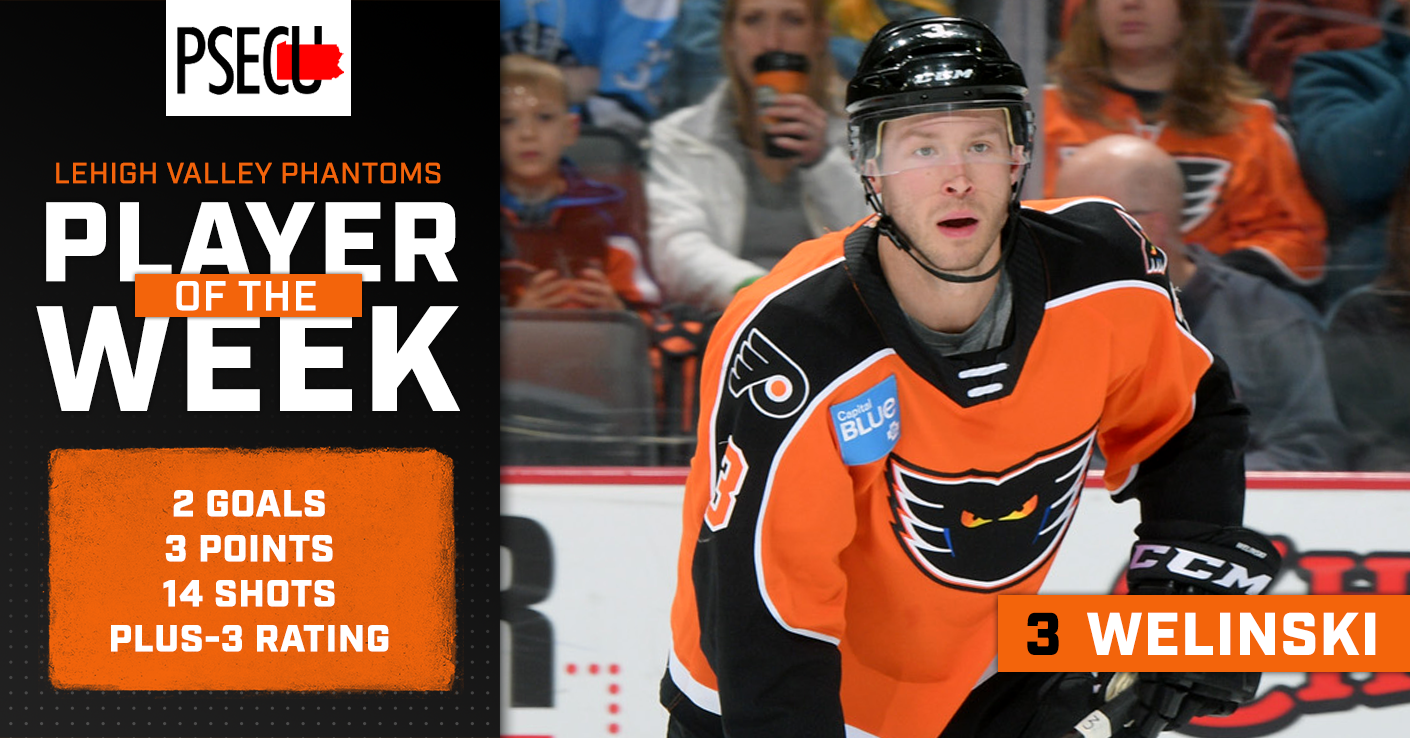 Lehigh Valley, Pa. — With two goals and an assist for three points, a plus-three rating and 14 shots across three games this past weekend, Lehigh Valley Phantoms defenseman Andy Welinski has been named the PSECU Player of the Week for the second time this season.

The Phantoms began another three-in-three weekend with a game against the Bridgeport Sound Tigers on Friday, February 14, inside PPL Center in downtown Allentown.

Welinski put Lehigh Valley on the board first as he scored his sixth of the season at the 11:16 mark of the opening frame.  As forward Kyle Criscuolo rounded out to the left of the Bridgeport net, he fired a pass out front where Welinski was able to get his stick on it and redirect a shot to the top right-hand corner of the net.

Does this make you Andy baby? pic.twitter.com/1MPaac9c7F

The Sound Tigers netted two goals of their own, back-to-back, but the Phantoms battled back to tie the game thanks to Tyler Wotherspoon’s fourth marker of the season at the 11:07 point of the third period.  The game remained knotted until the horn sounded, sending Lehigh Valley into overtime for the first time since January 22.

In the overtime period, Welinski retrieved a loose puck in the Bridgeport end and dished a pass to Mikhail Vorobyev who skated in and scored to give the Phantoms a 3-2 win.

Oh Misha, you're so fine
You're so fine, you blow my mind
Hey Misha, hey Misha pic.twitter.com/SXgKFTUPRQ

The two-point night marked Welinski’s fourth multi-point game of the season and saw him finish the night with a team-high seven shots on net and plus-three rating.

On Saturday, Lehigh Valley welcomed the Hartford Wolf Pack into PPL Center for the third time this season.

Similarly to Friday, Welinski got the scoring started for the Phantoms as he ripped home a shot from the right faceoff dot past Hartford goaltender Tom McCollum.

Morgan Frost and Max Willman assisted on this goal.

The Minnesota-Duluth product finished the three-game slate with a team-high 14 shots on net as the Phantoms picked up three of a possible six points on the weekend.