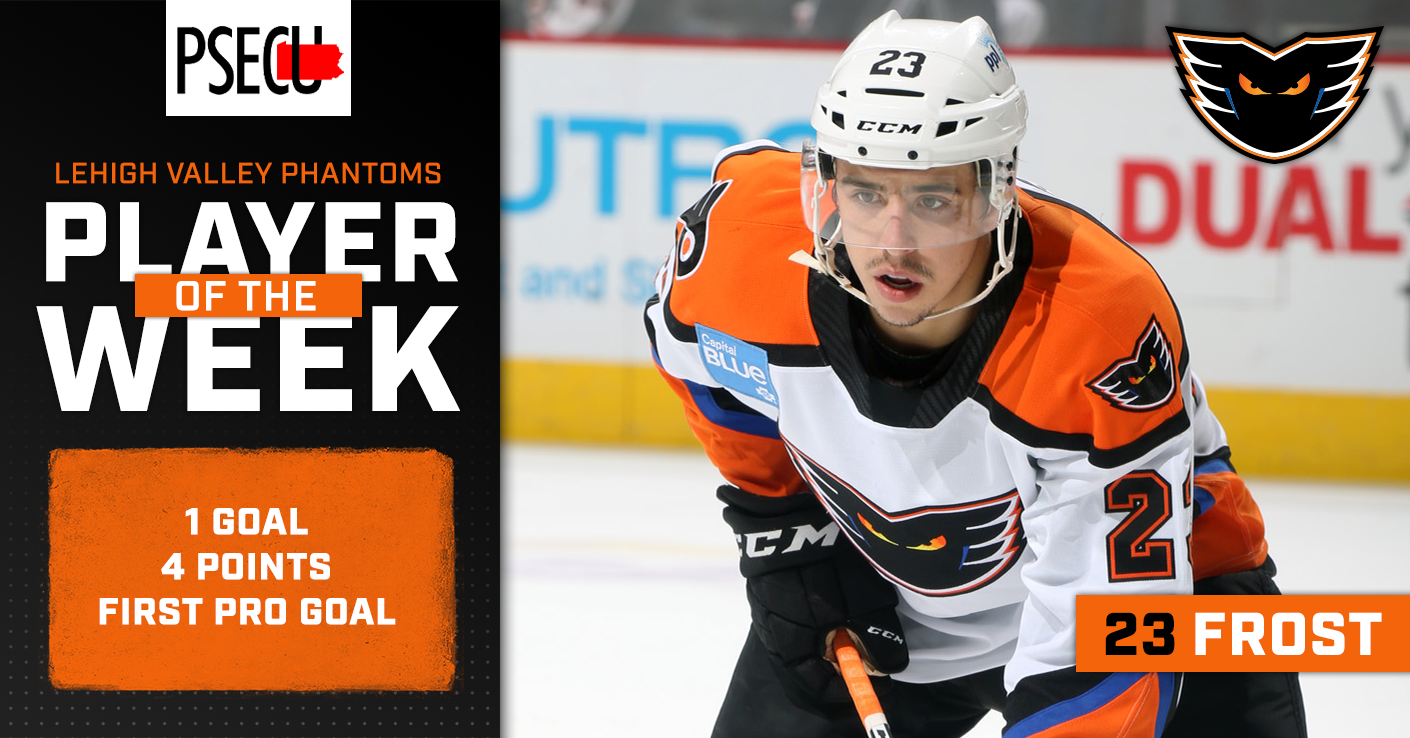 The Lehigh Valley Phantoms faced another set of back-to-back games inside of PPL Center this past weekend beginning with a contest against the North Division’s Binghamton Devils on Friday night.

After netting an early power-play goal at the 4:35 mark of the opening frame, the Phantoms extended their lead to 2-0 when Joel Farabee potted his third goal of the season — and the Phantoms’ second goal on the man advantage — after he received a pass from below the goal line from fellow forward Andy Andreoff.  Frost would earn his first professional point by collecting the secondary assist as he made a crisp pass from the half wall down to Andreoff behind the net.

Frost’s second point of the night, which came on the team’s third power play, was recorded on a tic-tac-toe play in which he received a cross-ice, slap pass from Cal O’Reilly and one-timed it over to a waiting Andreoff on the back door for an easy tap-in goal.  The Phantoms third power-play marker of the night made it 3-0 before the team headed into the locker room for the first intermission.

With a scoreless second period in the books, Lehigh Valley carried a 3-0 lead through nearly the entirety of the first half of the final frame before Andreoff netted his second marker of the night.  After a faceoff win by Andreoff, Frost collected the puck and distributed it up to Tyler Wotherspoon on the point.  Wotherspoon ripped a wrist shot towards the net that was deflected up and in by Andreoff to give the Phantoms a 4-0 lead.

Lehigh Valley went on to defeat Binghamton by a score of 4-1 for the team’s second victory of the season.

On Saturday, the Springfield Thunderbirds came to Allentown for their first matchup against the Phantoms during the 2019-20 season.

Despite being down 3-1 entering the third period, Lehigh Valley began to battle back with a goal at the 8:03 mark from Nic Aube-Kubel and then, 4:28 later, tied the game up thanks to Frost’s first professional goal.  Farabee skated down the right wing and shoveled a backhand pass on net where Greg Carey attempted to bat the puck into the net.  After bouncing around in front, the puck squirted out to the left where a waiting Frost collected it and buried it in the back of the net.

Lehigh Valley managed to force overtime and an eventual shootout, but fell 4-3.

With four points on the weekend, Frost is now tied for second on the Phantoms with Farabee and Mikhail Vorobyev.