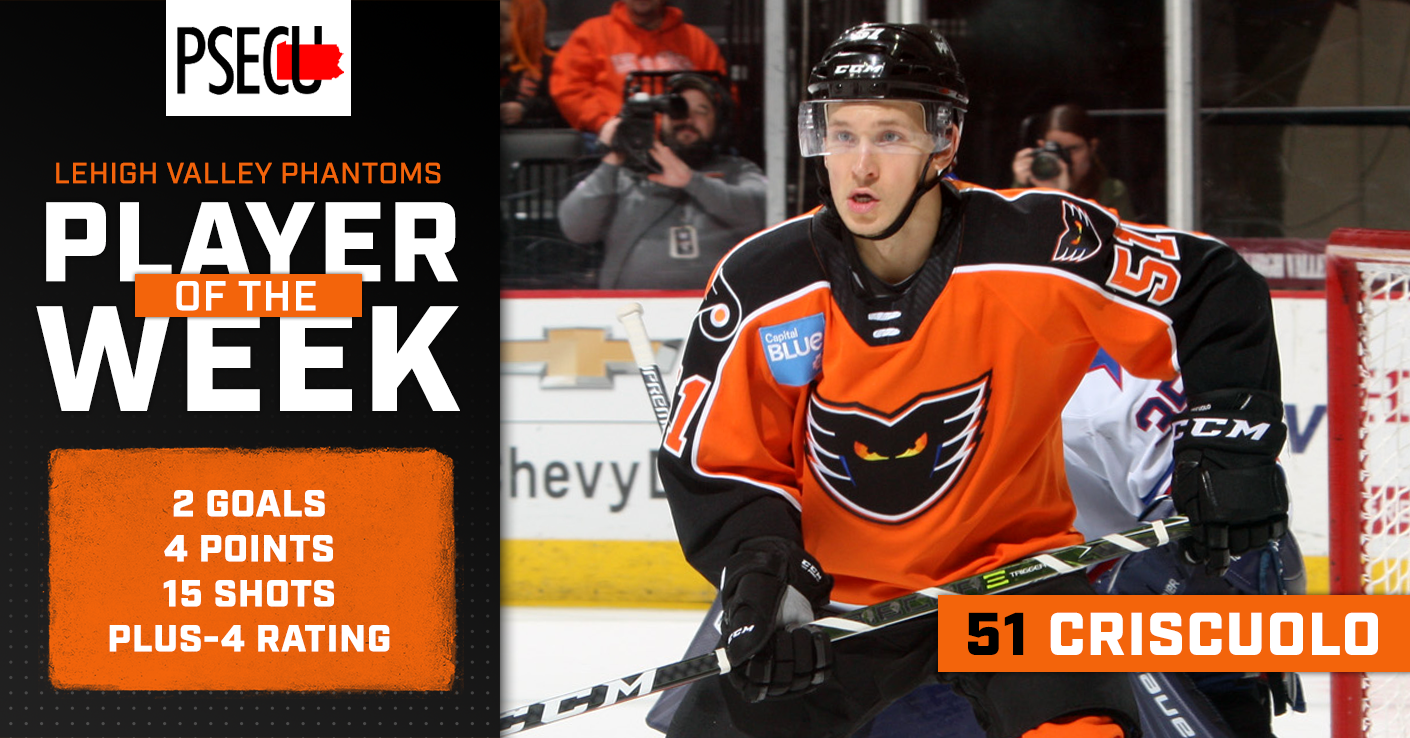 Lehigh Valley, Pa. — After recording a pair of multi-point games, in which he netted two goals and tallied two assists, as well as earning a plus-four rating in three total games this past weekend, Lehigh Valley Phantoms forward Kyle Criscuolo has been named the PSECU Player of the Week for the second time this season.

After a shutout win over the Hershey Bears on February 1, the Phantoms headed into this past weekend facing a three-in-three against Atlantic Division teams beginning with a game against the Springfield Thunderbirds on Friday night.

With the two teams scoreless after the first period, and with Lehigh Valley on the penalty kill, Criscuolo won a defensive-zone draw that eventually ended up on the stick of defenseman Reece Willcox.  The fourth-year defenseman rushed the puck up the right-wing boards before floating a puck over the defenders sticks and into the net for his first of the season.

James de Haas stretched the Phantoms lead to 2-0 before Criscuolo netted his seventh of the year at the 9:14 mark of the final frame to make it 3-0 in favor of the Orange and Black.  While on the man advantage, Criscuolo received a pass and broke into the Springfield zone on the right wing.  He skated the puck down to the faceoff dot before releasing a shot that bounced off a Springfield defenseman and into the net.

Lehigh Valley went on to defeat Springfield 4-1 and created a two-game winning streak in the process.

On Saturday night, the Phantoms traveled up the Northeast Extension of the Pennsylvania Turnpike to face off against the rival Wilkes-Barre/Scranton Penguins.

As the teams headed for the locker room at the end of the first period, Lehigh Valley had a commanding 3-1 lead over Wilkes-Barre/Scranton thanks to a goal from Isaac Ratcliffe and a pair of markers from Maksim Sushko.

11:59 into the middle frame, Criscuolo found the back of the net for the second time of the weekend as he played a bit of give and go with fellow forward David Kase.  Criscuolo skated the puck into the zone up the left-wing boards and dropped a pass to Kase.  Kase then returned the puck to Criscuolo and the 27-year old one-timed a shot past the blocker side of Penguins’ goalie Emil Larmi.

Criscuolo now ranks seventh on the Phantoms in points with 18 (8G-10A), across his 34 games played, and is tied for second on the team with four multi-point games this season.  The Harvard product tallied a team leading 15 shots through three games this past weekend and also finished the weekend with a plus-four rating, putting his overall season rating at plus-eight.