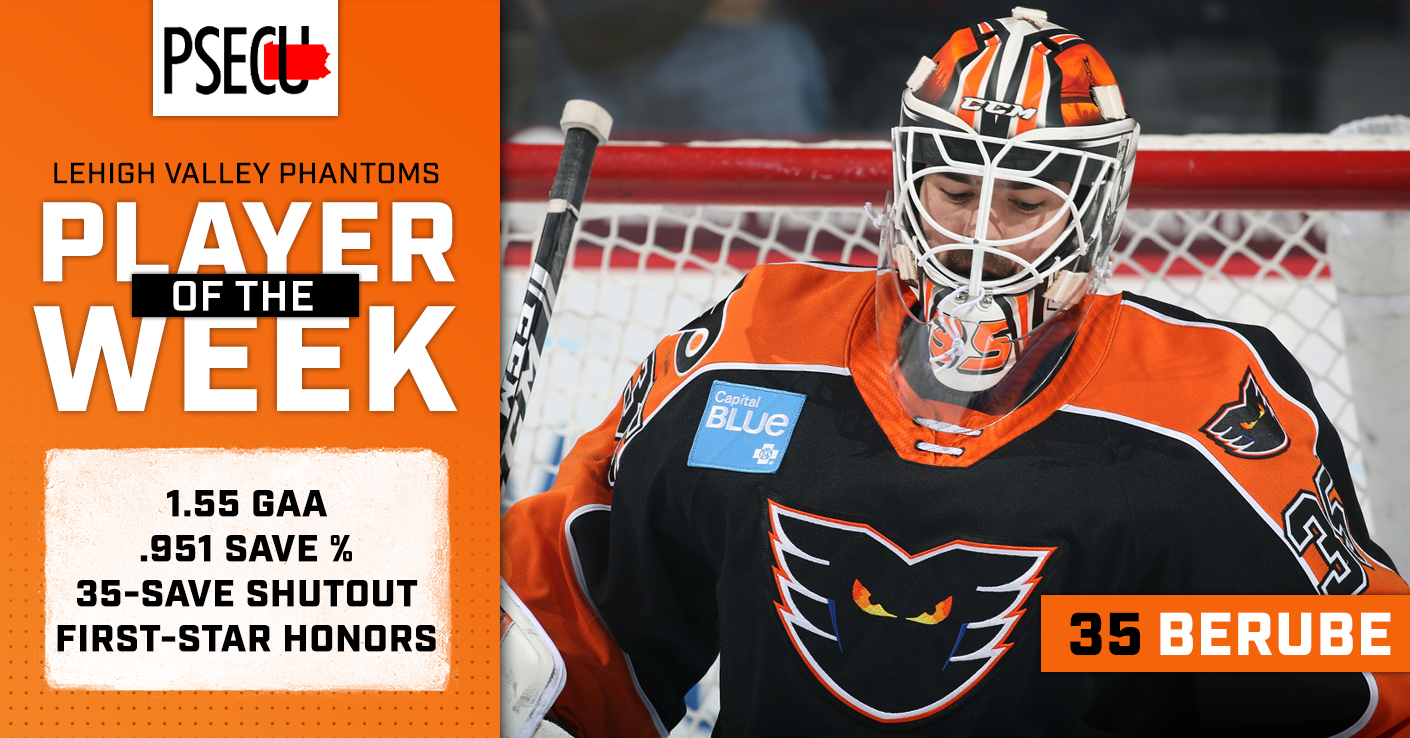 Lehigh Valley, Pa. — After recording a 35-save shutout in Sunday afternoon’s game against the Cleveland Monsters as well as posting a 1.55 goals-against average and a .951 save percentage in two appearances this past weekend, Lehigh Valley Phantoms goaltender J-F Berube has been named the PSECU Player of the Week.

The Phantoms began the week with a road game against the Utica Comets on Friday night.

After replacing fellow netminder Alex Lyon in net early in the first period of Friday’s contest, Berube played the remainder of the game allowing just three goals on 26 shots through 56:39.  Despite taking the the loss in record book, Berube made a number of high-quality saves on the North Division’s first-place team.

With Lyon returning to the net for Saturday’s game, in which he posted a 2-0, 37-save shutout against the Laval Rocket, Berube received the starting nod for Sunday against his former team, the Cleveland Monsters.

With the entirety of the contest being battled in a scoreless tie, Berube waited until the 18:59 mark of the third period before the Phantoms finally broke through on the scoresheet.  Lehigh Valley Co-Captain Cal O’Reilly netted his third of the season, the eventual game winner, to give the Phantoms a 1-0 lead over the opposition.  Maksim Sushko added an empty-net goal to help push the team to a 2-0 victory.

By night’s end, the 28-year-old netminder had made 35 saves on 35 shots against Cleveland, giving him his first shutout of the season.  The blanking of the Monsters marked the 14th shutout of his professional career and back-to-back shutouts for Lehigh Valley.

Berube: “It’s always a process. It’s something to feel good about, after this weekend. For me personally, it’s about keeping the game as tight as possible and giving them a chance to win.” pic.twitter.com/pmq6uoMYSj

The consecutive shutouts is a feat that has now been accomplished eight total times in Phantoms franchise history, which includes three times in Lehigh Valley history.