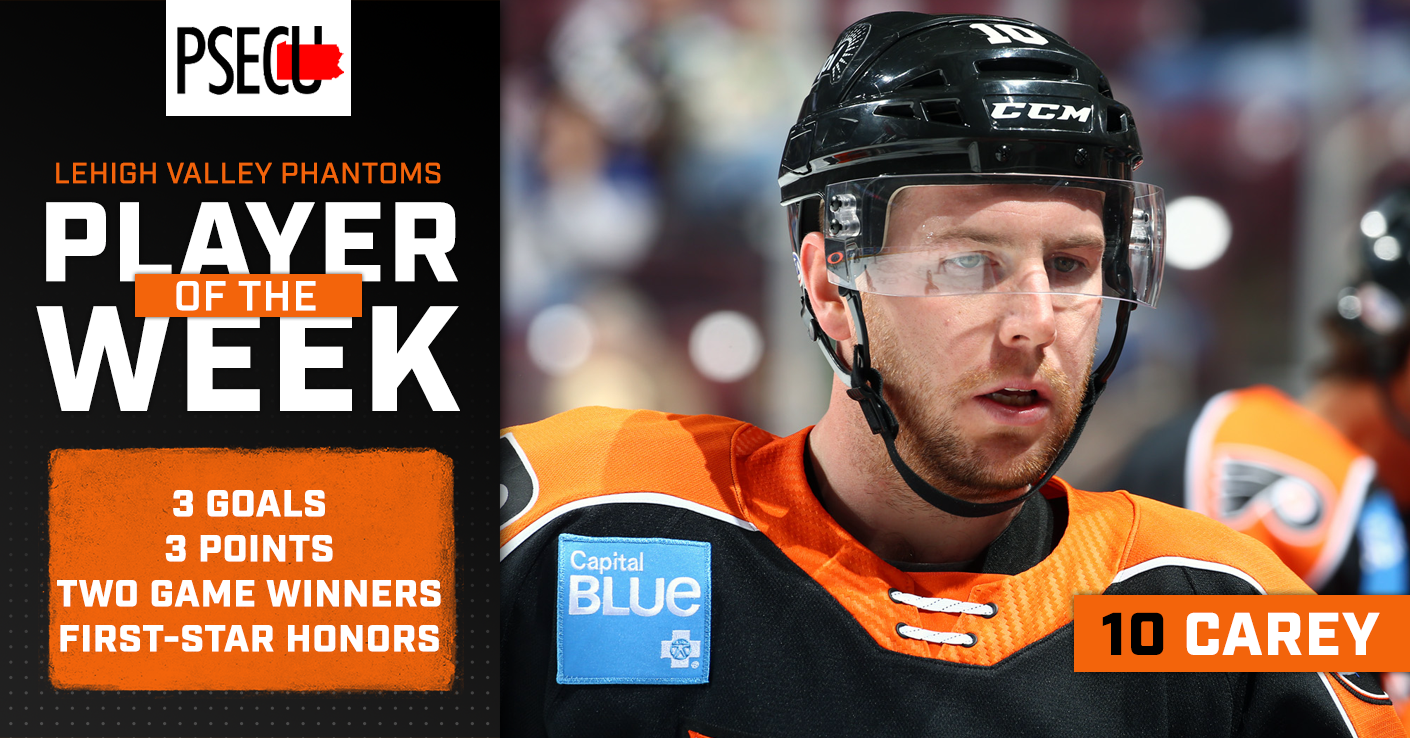 Lehigh Valley, Pa. — With three goals this past weekend — two of which were game-winning goals — as well as securing first-star honors in Saturday’s game, Lehigh Valley Phantoms forward Greg Carey has been named the PSECU Player of the Week for the second time this season.

The Phantoms continued their five-game homestand with a midweek contest against the Syracuse Crunch on Wednesday, January 15, inside of PPL Center.

Despite Syracuse taking a 3-2 lead off the stick of former Phantom Danick Martel just 51 seconds into the middle frame, Lehigh Valley battled back and eventually tied the game at three when Max Willman netted his first goal of the season in the American Hockey League.

After Morgan Frost gave the Phantoms a 4-3 lead early in the third, Carey potted a backhander on a power-play rush with under five minutes to play in the third period to extend the lead to 5-3 over the Crunch.  As linemate Cal O’Reilly skated up the right-wing boards, he turned and passed across the ice to Carey as he was crossing into the Syracuse zone.  Carey gloved the puck down and powered his way to the net before flicking a backhander that went through goaltender Spencer Martin.

The goal marked Carey’s 10th of the season and stood as the eventual game winner in the 5-4 victory.

After a 4-1 win over the Binghamton Devils on Friday night, the Phantoms completed their five-game home swing with a tilt against the Rochester Americans on Saturday night.

Carey got the scoring started for Lehigh Valley with his second power-play marker of the week as he banged in a redirected puck off the stick of O’Reilly at the 5:48 mark of the opening stanza.

After the Phantoms extended their lead to 2-0, Carey again found the back of the net to put the team ahead 3-0 in the second period.  David Kase retrieved a loose puck behind the Rochester net and passed a backhand, centering feed out front to a wide-open Carey who ripped it into the back of the net just past the midway point of the second period.

Carey’s second goal of the game also marked 100 goals as a member of the Phantoms, tying him for third overall in career goals in Phantoms franchise history with Kirby Law.

The Phantoms went on to shutout the Americans 4-0.

With two game-winning goals this past weekend, Carey now leads the team with a total of three.

The Hamilton, Ontario, native also leads the team in goals (12) and points (21) through his 39 contests this season.