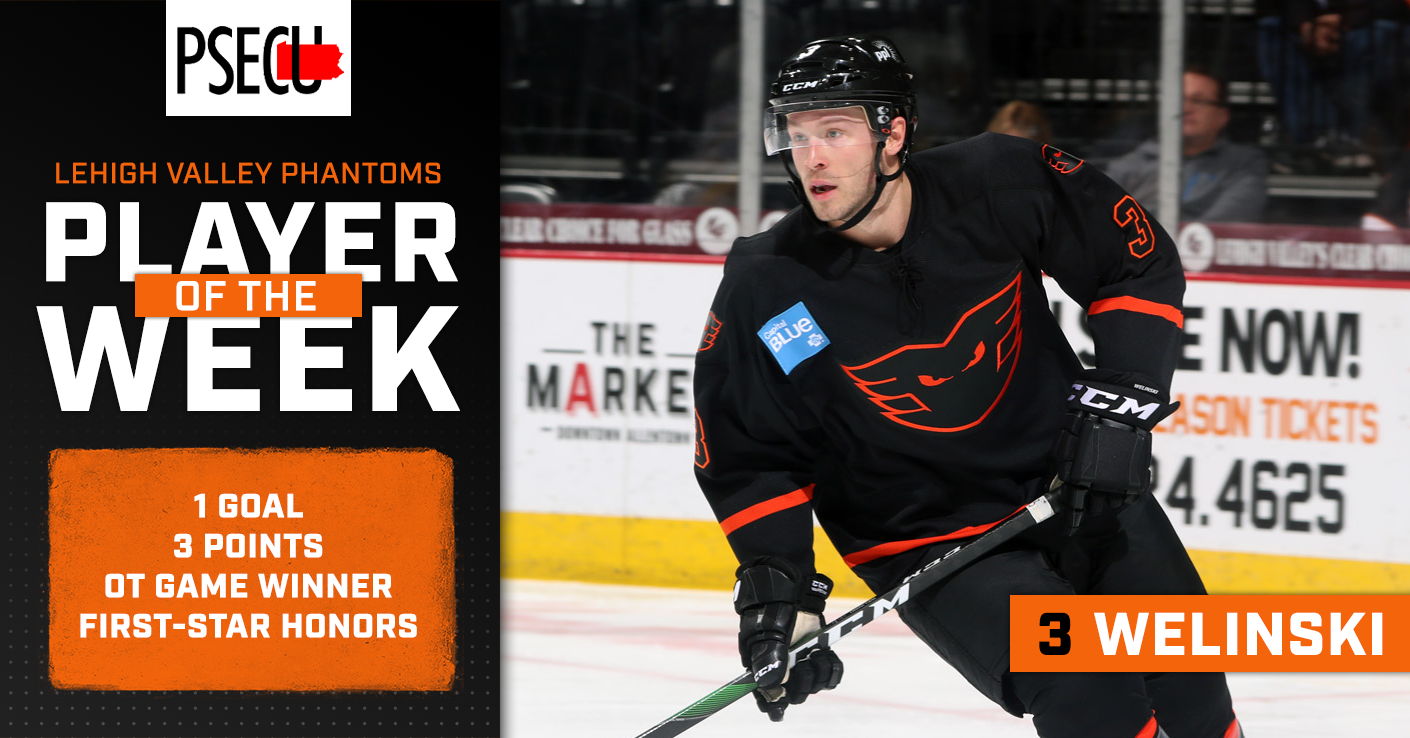 Lehigh Valley, Pa. — With his second overtime, game-winning goal of the season and three total points in just two games this past week, Lehigh Valley Phantoms defenseman Andy Welinski has been named the PSECU Player of the Week.

After suffering a 6-2 loss at the hands of the rival Wilkes-Barre/Scranton Penguins on Wednesday night in Wilkes-Barre, Lehigh Valley rematched against their in-state rival on Friday night in Allentown.

Having already jumped out to a 4-0 lead after a stellar first period, the Phantoms added a fifth goal just 1:01 into the middle frame when Welinski collected a puck in the neutral zone and skated down the right-wing boards before directing a wrist shot towards the front of the net where a driving Isaac Ratcliffe chipped it past Penguins goaltender Emil Larmi.

The Phantoms exacted revenge on the Penguins as they took Friday’s contest 6-5 in overtime.

On Saturday, Lehigh Valley welcomed the Hartford Wolf Pack into PPL Center for the first time during the 2019-20 season.

Despite the Wolf Pack taking the lead near the end of the first period, the Phantoms tied the game late in the third when Welinski faked a shot on a power play and dished a quick pass over to Greg Carey who one-timed the puck past Igor Shesterkin.  The assist on Carey’s eighth goal of the season marked Welinski’s second point of the weekend, bringing his season-long point total to 11 in 14 games.

For the second time in as many games Lehigh Valley would require extra time to dispose of their opponent.  Near the halfway point of the extra frame, Cal O’Reilly chased a puck up the right wing boards and, once he collected it, shoveled a pass to center point where Welinski entered the zone after a line change.  The 26-year-old defenseman skated down to the top of the left circle before firing a shot past the glove side of the Wolf Pack’s goaltender.

The overtime winner was Welinski’s second, and fourth total goal, of the season which also cemented his third multi-point contest in the month November.