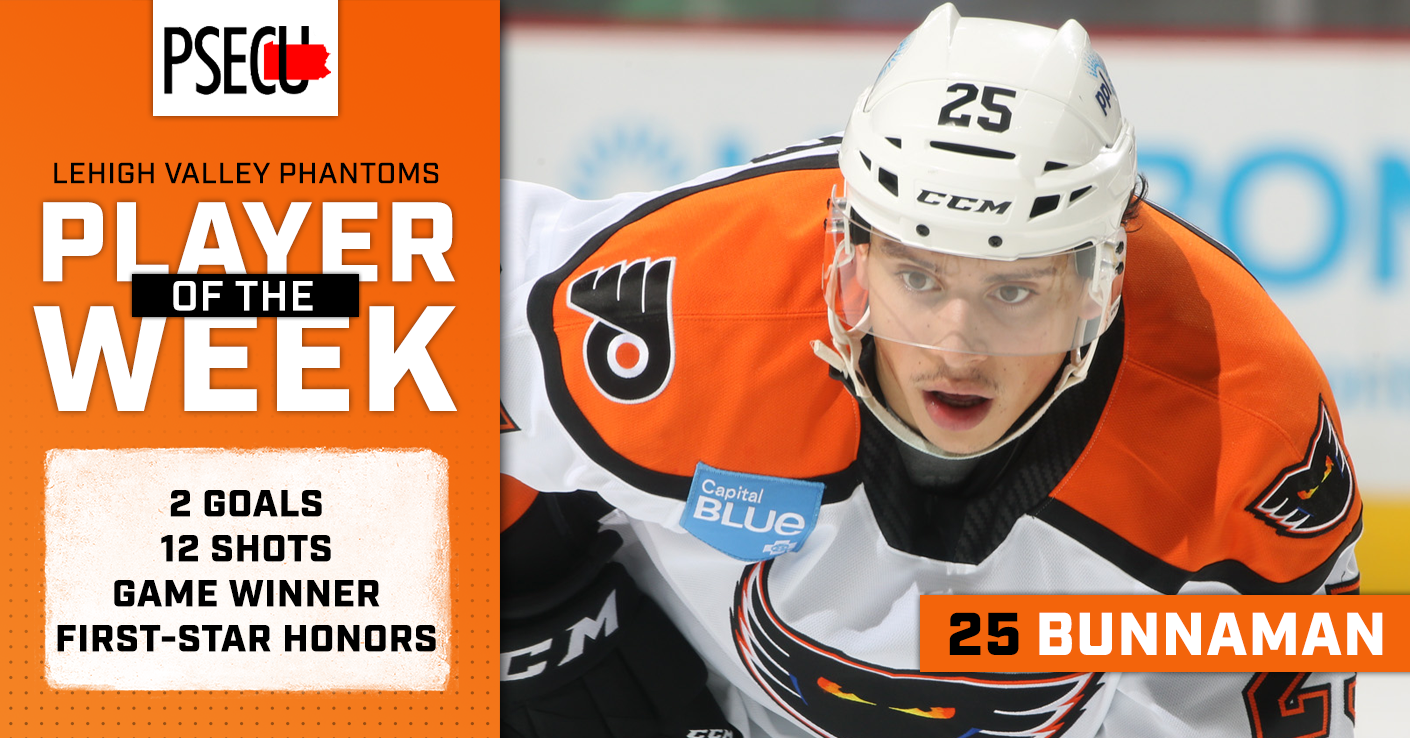 Lehigh Valley, Pa. — With goals in back-to-back games this past weekend, a team-high 12 shots, and first-star honors on Sunday, Lehigh Valley Phantoms second-year-forward Connor Bunnaman has been named the PSECU Player of the Week for the first time this season.

After a Friday night loss in Laval, the Phantoms headed to Belleville for their second of three games against Canadian opponents this weekend.

While Lehigh Valley netted two goals early in both the first and second period, Belleville battled back to take a 3-2 lead with under four minutes remaining in the middle frame.

As the third period began, with the Phantoms on a carryover power play from the second period, Bunnaman received a pass from below the goal line from fellow forward Morgan Frost.  Bunnaman, who was to the right of the net, fired the puck hitting Senator’s goalie Filip Gustavsson before collecting his own rebound and firing it home just 40 seconds into the third period to tie the game at three.

Despite tying the game up, the Phantoms would surrender two more goals and drop Saturday’s contest 5-3.

On Sunday, the team traveled to Toronto for an afternoon game against the Marlies.

In similar fashion to their prior engagement, the Phantoms jumped out to a 2-0 lead over the opposition and, after a scoreless middle frame, saw their lead swell to 3-0 thanks to Bunnaman’s second marker of the weekend and third of 2019-20.

David Kase picked up a loose puck and skated it to center point before ripping a shot that was deflected on its way to the net.  The high-flying biscuit landed near the right side of Toronto’s net where a waiting Bunnaman kicked the puck to his stick and wrapped it around Marlies’ goaltender Joseph Woll and into the net.

The goal stood as the eventual game-winner and earned Bunnaman first-star honors on the night.

Bunnaman now has three goals on the season across 19 tilts and is continuing to build off of his strong rookie season.  During the 2018-19 season, the Guelph, Ontario, native potted 19 goals and tallied 13 assists for a total of 32 points in 62 games.