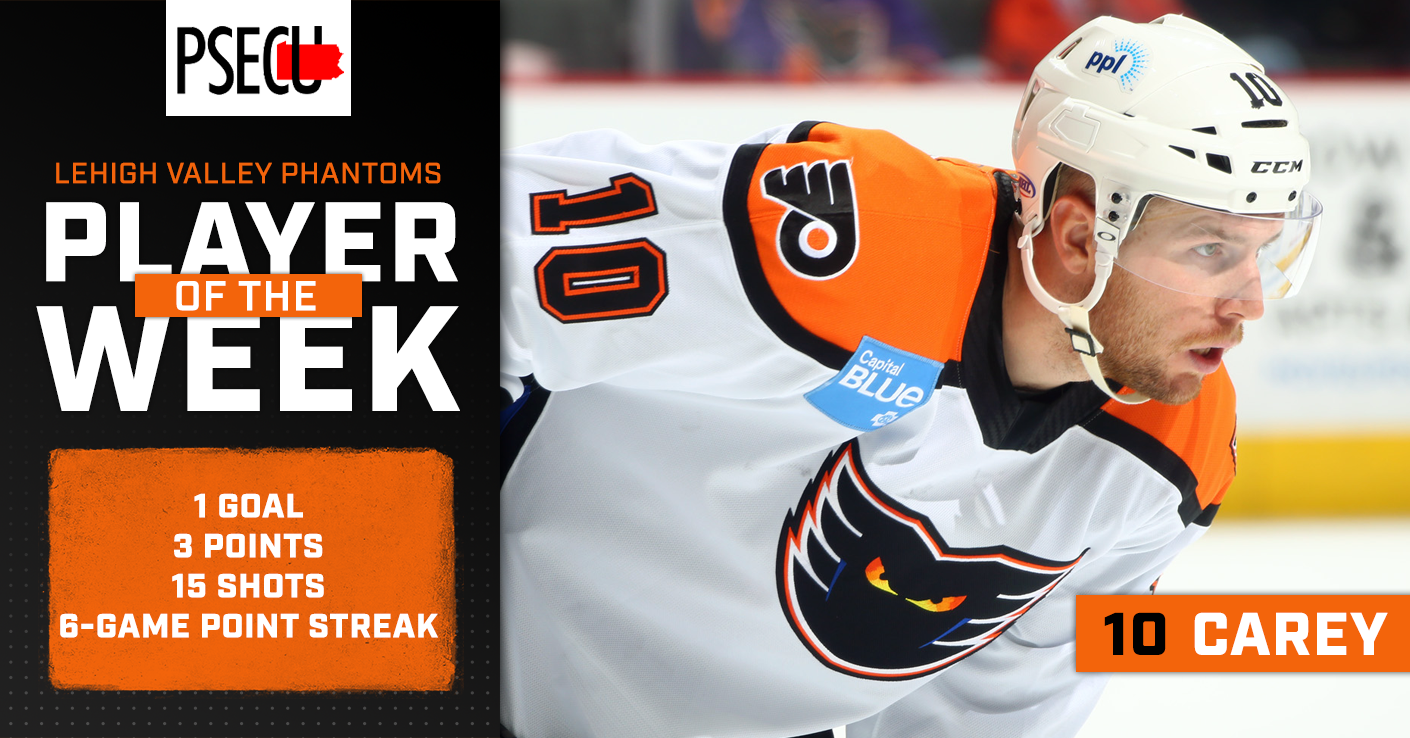 Lehigh Valley, Pa. — With a goal and three total points — that stretched his current point streak to six games — and a team-high 15 shots on goal in three games this past week, Lehigh Valley Phantoms forward Greg Carey has been named the PSECU Player of the Week.

Lehigh Valley began their week with an early-morning game against the Springfield Thunderbirds on Wednesday, November 13.

After heading into the locker room after the first period down 1-0, the Phantoms battled back just 1:29 into the second period when Greg Carey ripped a shot from the point that found its way past Springfield goaltender Chris Driedger and into the net to tie the game up at 1-1.

The goal marked Carey’s third in his past four contests and increased his current point streak to four games.  The Hamilton Howitzer lived up to his nickname as he also put a team-high seven shots on net during a 42-shot performance by the Phantoms squad.

Despite peppering the Thunderbirds goalie with shots throughout the game, the Phantoms would drop Wednesday’s school-day game by a score of 2-1.

On Friday, Lehigh Valley traveled to Binghamton for the first time during the 2019-20 season.

After a scoreless first period, the Devils found the back of the net twice in the span of 1:40 to jump ahead 2-0 with 11:11 remaining in the middle frame.  Just around three minutes later, with the Phantoms on a power play, the team tied the game up thanks to Andy Welinski’s third of the season.

With the Devils scrambling in their own end, Carey attempted two shots on net before faking a third that setup and back and forth between Welinski and Cal O’Reilly.  Welinski finally unleashed a one-time shot that gave the Phantoms their first goal of the contest and cut the Devils’ lead in half.

Carey’s assist, which marked his sixth point in his past five games, again extended his current point streak in a 3-1 loss to the Devils.

Saturday night was the fourth and final game of the Phantoms road swing which pitted them against the rival Wilkes-Barre/Scranton Penguins for the fourth time this season.

Similar to Wednesday, the Phantoms found themselves trailing at the end of the first period by a score of 1-0. Luckily, again in similar fashion to their midweek contest against the Thunderbirds, the Phantoms began the second period with an early goal to tie the game up.

As Greg Carey collected a puck in the neutral zone and skated up ice and into the Penguins end, he took a shot at center point that rebounded off Wilkes-Barre/Scranton’s goaltender Dustin Tokarski and back out to the left of his cage.  Mikhail Vorobyev, who was cruising through the slot, found that rebound and flipped a backhander over Tokarski and into the net to tie the game.

The Phantoms went on to drop Saturday’s contest, 2-1, against the Penguins.

With another assist in Saturday’s game, Carey extended his point streak to six games in which he has tallied a total of seven points (3G-4A).  With 12 points on the season (5G-7A), Carey is also now the active points leader on the team and he also currently leads the team in shots with 48 on the season.