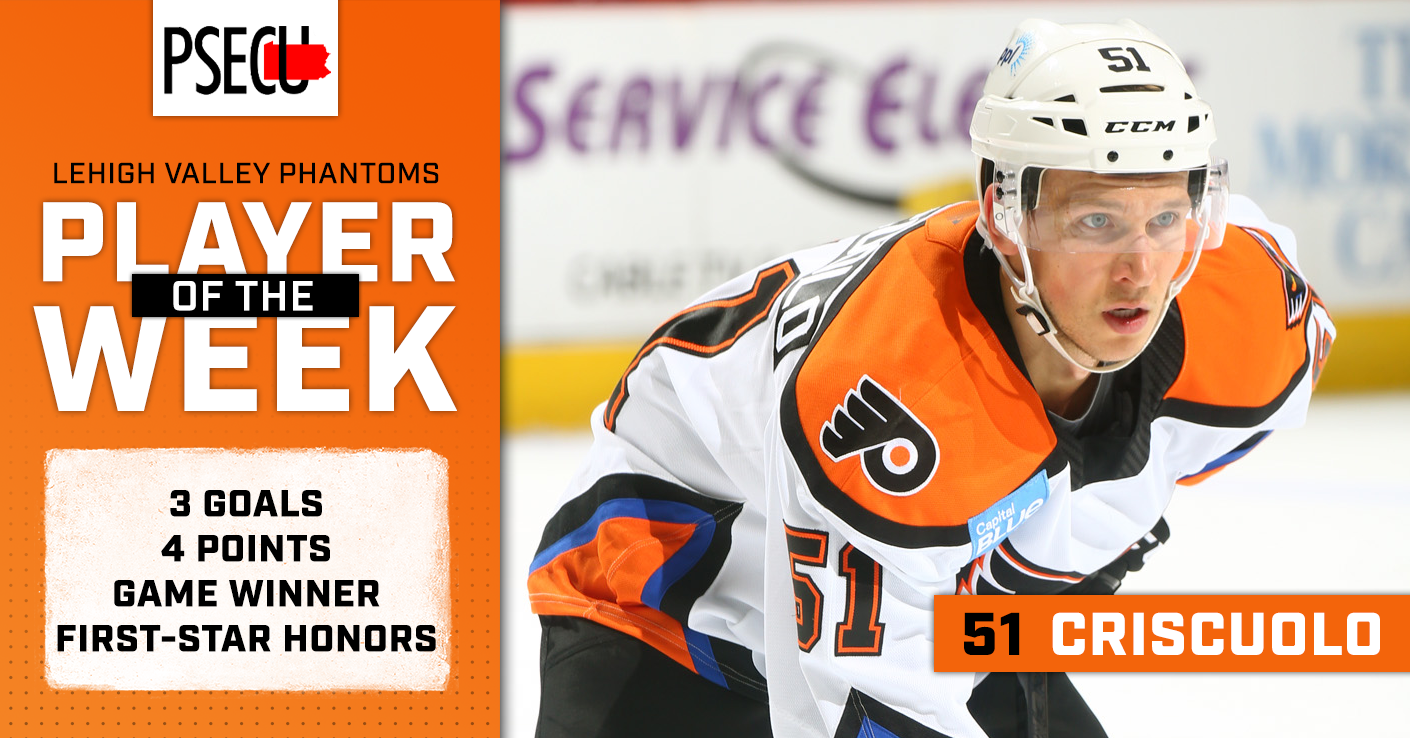 Lehigh Valley, Pa. — With three goals — including a game-winning goal — and a total of four points in three games this past week, Lehigh Valley Phantoms forward Kyle Criscuolo has been named the PSECU Player of the Week.

Lehigh Valley began this week’s slate with a midweek contest against the rival Wilkes-Barre/Scranton Penguins inside of PPL Center on Wednesday night.

Despite the Penguins getting on the board first, the Phantoms battled back to tie the game at one when Criscuolo won a faceoff back to defenseman T.J. Brennan who fed Andy Welinski a pass that he one-timed from the point past Penguins’ goaltender Casey DeSmith.

Later, with the game tied at two for nearly the entirety of the second period, forward Cal O’Reilly picked up a puck along the boards behind the Penguins net and dished it out front to an open Criscuolo who promptly one-timed the puck, bar down, into the Penguins net.

The goal marked Criscuolo’s second as a member of the Phantoms and gave Lehigh Valley a 3-2 lead heading into the third period.

After being unable to find the equalizing goal in a scoreless final frame prompted Wilkes-Barre/Scranton to pull the goalie, a loose puck was picked up by Criscuolo and lifted down the open sheet of ice into the empty net to give the Southampton Township, N.J., his second marker of the game and propel the Phantoms to a 4-2 win.

With three points on the night, as well as a plus-four rating, Criscuolo was named the game’s first star.

Having picked up an overtime win over the Bears on Saturday in Allentown, the Phantoms traveled to Hershey for a rematch on Sunday afternoon.

With 6:28 remaining in the opening frame, Greg Carey skated the puck down the left-wing boards and shoveled a saucer pass over to a streaking Criscuolo who met the puck at the net mouth to chip it up and over Hershey goaltender Vitek Vanecek to make it 1-0 Lehigh Valley.

The goal was Criscuolo’s fourth of the season and his fourth point of the week.

Lehigh Valley snagged a standings point on Sunday, but ultimately fell to the Bears by a score of 3-2 in the shootout.

Criscuolo currently ranks third on the Phantoms in goals (4), points (7) and plus-minus rating (+5) this season.