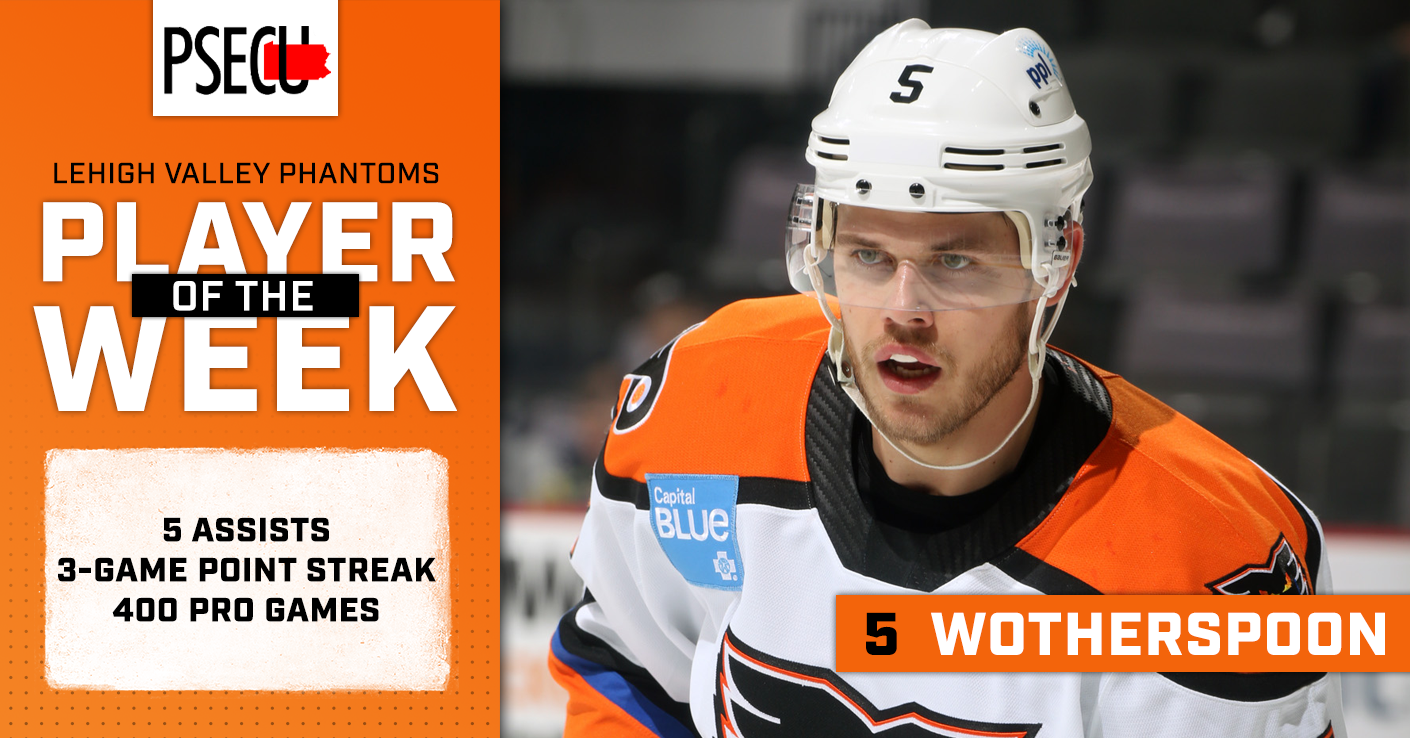 Lehigh Valley, Pa. — After tallying five assists, recording a three-game point streak, earning second-star honors and playing in his 400th professional game over three games this past week, Lehigh Valley Phantoms defenseman Tyler Wotherspoon has been named the PSECU Player of the Week for the first time this season.

The Phantoms returned home for three games inside of PPL Center this week beginning with a Wednesday contest against the Charlotte Checkers.

With Lehigh Valley already up 1-0, thanks to Pascal Laberge’s first goal of the season just 3:37 into the contest, Mikhail Vorobyev extended the Phantoms lead to 2-0 over the Checkers in the second period as he picked up a rebound off of a Tyler Wotherspoon shot and fired it home with 12:44 remaining in the middle frame.

After Charlotte battled back to tie the game at 2-2, with the clock winding down, Wotherspoon collected a loose puck and fed a cross-ice pass to his D partner Nate Prosser.  Prosser skated the puck into the Checkers zone and fired a shot from the right circle that rebounded right to the stick of a hard-charging Gerry Fitzgerald.  Fitzgerald found the back of the net and the goal put the Phantoms up 3-2 with just 2:41 left in the contest, giving Wotherspoon his second assist of the evening.

Lehigh Valley went on to edge Charlotte 3-2 for its first win of the week.

On Friday, the Phantoms and Checkers rematched inside of PPL Center for the the two teams fourth overall meeting this season.

After heading into the locker room at the first intermission down 2-1, the Phantoms battled back thanks to David Kase’s second goal of the game after he scooped a puck at the side of the net and stuffed it past Charlotte’s Anton Forsberg to tie the contest at two goal apiece.

Charlotte retook the lead, and then added another to make it 4-2 before Lehigh Valley scored two of their own — off the sticks of Greg Carey and Cal O’Reilly — which ultimately sent the game into overtime.  Wotherspoon, who had already earned an assist earlier in the game on Kase’s second goal of the game, tallied two more helpers on Carey’s and O’Reilly’s goals to cap off a three-point night that included a plus-two rating which earned him second-star honors.

Friday night’s tilt against the Checkers also represented the 400th professional game for Wotherspoon, who now has 22 goals and 112 assists for a total of 134 points over his now seven-year career.  In addition to the milestone, the Burnaby, British Columbia, native’s three-point night extended his current point streak to three games.

The Phantoms took Friday night’s game by a score of 5-4 in overtime.