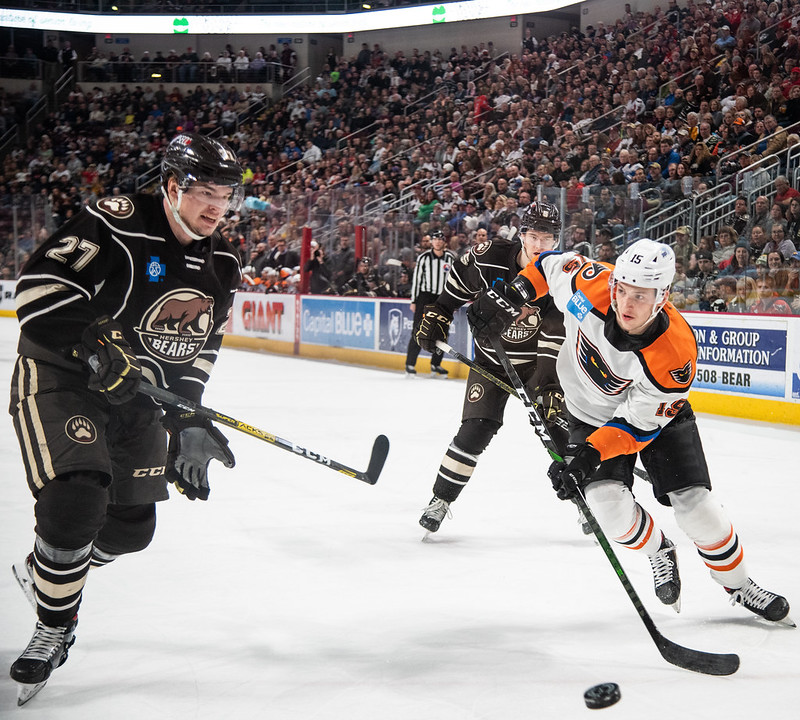 Hershey, Pa. – Lehigh Valley overcame an early 2-0 deficit on goals by Morgan Frost (10th) and Maksim Sushko (10th) to forge a 2-2 deadlock but the Phantoms were unable to take the lead in a 5-3 rivalry-night loss at the Hershey Bears on Sunday evening.

Bobby Nardella (3rd) scored the key tie-breaking goal almost midway through the third period and the Bears hung on from there. Andy Andreoff (7th) struck for a late extra-attacker goal to pull the Phantoms back to within one before Hershey sealed the victory with a late empty-netter in the closing seconds. Defenseman Mark Friedman registered a two-point game with a pair of assists on his return to the Phantoms. 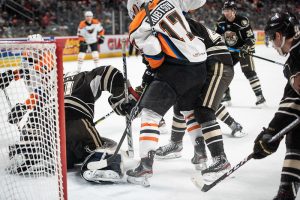 Frost and Sushko became the third and fourth Phantoms to reach double digits in goals this year joining Greg Carey (13) and Misha Vorobyev (10).

Liam O’Brien (10th) opened the scoring for Hershey (32-16-6) 5:35 into the game on a stolen puck behind the net by Garrett Pilon who connected with his teammate at the net-front to beat J-F Berube.

The Bears extended the lead to 2-0 on an early second-period power play with Christian Djoos (5th) firing through from center point past a screened Berube.

Lehigh Valley dominated from there as the Bears recorded just one shot over the next 20 minutes. The Phantoms out shot Hershey 12-3 in the middle frame and zoomed back to the score by the second break.

Mark Friedman’s line-drive from the red line to the corner caromed off a stanchion and back out to the slot setting up Morgan Frost for a big one-time blast past the glove of Pheonix Copley. Frost’s second goal and third point of the weekend off the friendly bounce put the Phantoms on the board at 8:11 into the second period.

Sushko equalized 10 minutes later following a pickoff at the Hershey line by German Rubtsov who returned to the lineup following a three-game injury absence. Rubtsov’s attempted drop for Sushko re-entering the zone instead went over to Mark Friedman who rifled a pass from the left point for Sushko on the backdoor who beat Copley’s attempt for a spectacular sprawling left-pad save. 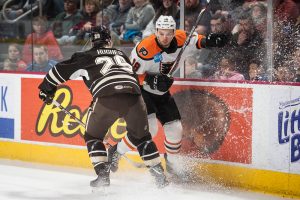 The Phantoms dominated possession time in the opening minutes of the third period as well but a Bears’ defensive zone faceoff win led to rookie defenseman Bobby Nardella rushing up the left-wing boards and taking it behind the Phantoms and to the other side for a wide wrap-around goal at 8:50 into the frame for a 3-2 Hershey advantage. Two of Nardella’s three goals this season have come against the Phantoms.

Lehigh Valley continued to press after that in efforts for a tying tally but Hershey surged back with Axel Jonsson-Fjallby’s backhand flip from the end-boards connecting with an onrushing Beck Malenstyn (7th) who buried his blast for a 4-2 advantage with just 3:57 remaining.

The Phantoms pulled back to within one with Andreoff’s extra-attacker sharp-angle goal from the right-wing corner assisted by Cal O’Reilly and Chris Bigras with 1:45 left.

Lehigh Valley was searching for another 6-on-5 goal when Andy Welinski’s blast from the right point was courageously blocked by Malenstyn eventually leading to Brian Pinho finishing the night with an empty netter with 10.1 seconds left.

Lehigh Valley out shot the Bears 29-20. The Phantoms were 0-for-4 on the power play while Hershey finished at 1-for-4.

The Phantoms continue their four-game road-trip on Wednesday night at the Bridgeport Sound Tigers and will follow that up with Friday and Saturday excursions to Rochester and Syracuse. The Phantoms return to PPL Center on February 28 and February 29 for a pair of games against the Charlotte Checkers.

NEXT TIME OUT: The Phantoms continue their four-game road trip at Bridgeport (February 19), Rochester, (February 21) and Syracuse (February 22). They will return home on February 28 for a weekend series against the Charlotte Checkers as the team celebrates the 40th Anniversary of the 1980 Miracle on Ice.