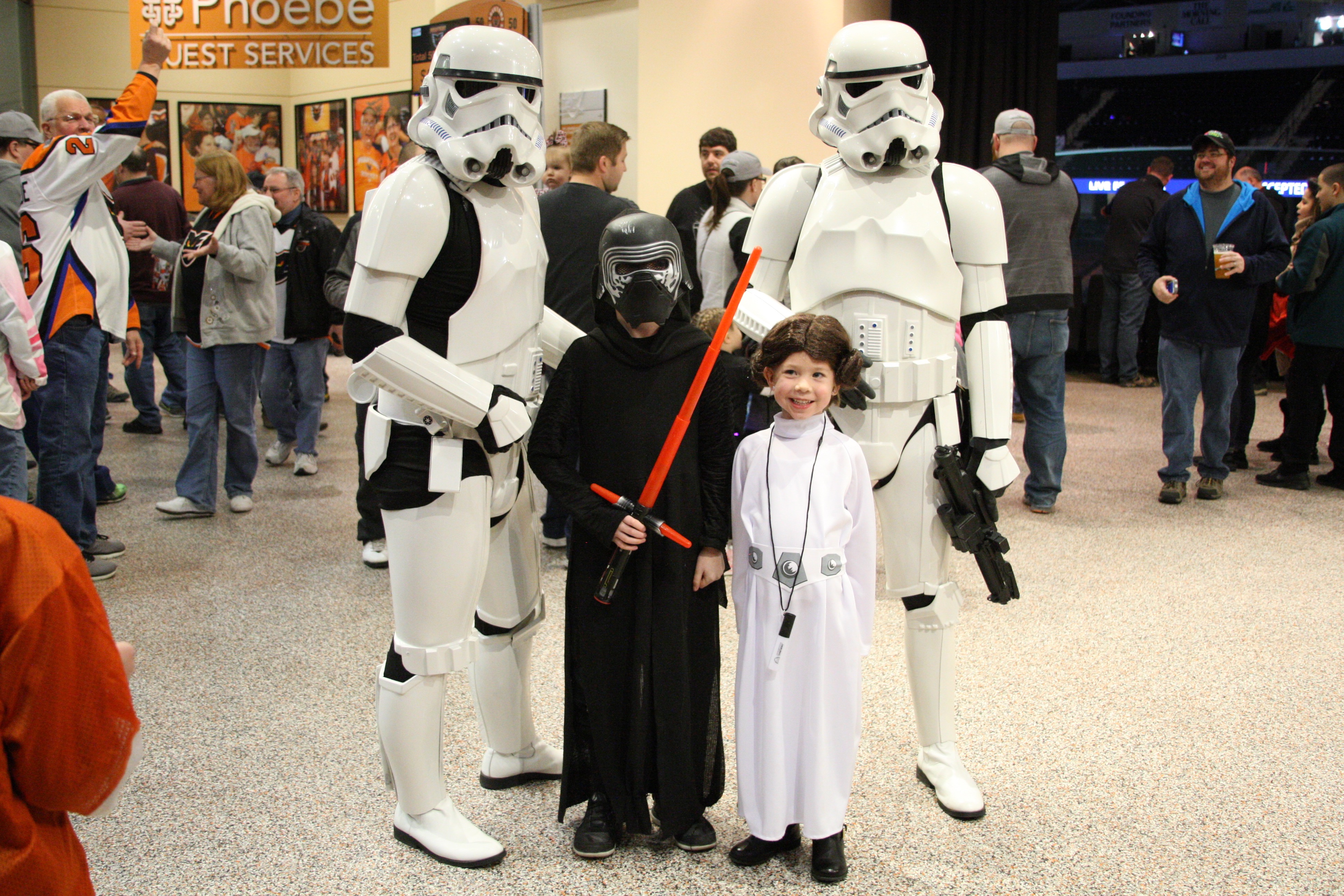 Lehigh Valley, PA – A huge gathering of 8,912 fans jammed into PPL Center to enjoy Star Wars Night as the Lehigh Valley Phantoms extended their point-streak to four consecutive games in a 3-2 overtime loss to the Utica Comets.

Mike Vecchione (11th) extended his goal-streak to three straight and Oskar Lindblom (13th) used some nifty moves on a terrific shorthanded goal in building a 2-1 lead. But it appeared the Force was with The Comets in this contest as the Phantoms attack blasted four shots off the post before Utica finally came back to tie the game with just 57.5 seconds remaining. The Comets completed the comeback when Wacey Hamilton buried the overtime winner on the back-door of a 2-on-1. 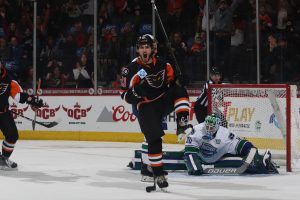 The enthusiastic and noisy contingent in downtown Allentown represented the largest crowd of the season and the eighth sellout this year. The fans arrived ready for Star Wars style fun with many kids (as well as adults) dressed appropriately in costume. There were several Darth Vader’s and Princess Leia’s seen in the arena and they had the opportunity to meet Chewbacca and dozens of other Star Wars characters who patrolled the concourse and made sure all would be safe from any Evil Empire or Death Star attacks.

The result extended the Phantoms point streak to four games at 3-0-1. Lehigh Valley is also 5-1-1 in its last seven games. The team’s overall mark of 26-13-6 for 58 points represents the most wins and points in the Atlantic Division entering the league’s All-Star Break. For the Phantoms, a little stretch away from the rink comes at a good time and is a chance for the players to have a little bit of relaxation before the stretch run of the season.

“This is going to be a longer break than our Christmas break,” McDonald said. “It gives guys an opportunity just to unwind because once we get back our next break is going to be when the season’s over. It will be good for guys to kind of get away whatever they’re doing whether it’s going to be to get some sun or go see family. Just to get away from the game.”

The Phantoms opened the scoring with just under six minutes remaining in the first period when a relentless forecheck produced intense offensive pressure leading to an opportunity atop the goal crease for Vecchione who promptly slammed home his 11th goal of the season and third in as many games this week. Fazleev and Will O’Neill assisted on the even-strength strike netted 14:14 into the opening frame. 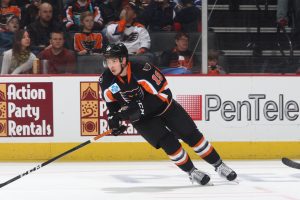 Utica leveled the tilt early in the second period when Wacey Hamilton’s bid from the right wing produced a rebound off Tokarski that was quickly pounced on by Hamilton and thrown into the back of the net for his first goal of the year. Alexis D’Aoust collected the only assist on the five-on-five marker converted exactly three minutes into the middle stanza.

The Phantoms regained the lead while shorthanded with just over three minutes remaining in the second period. Lindblom used a crafty spin-o-rama in the left circle and then carried wide around goalie Thatcher Demko for a creative wraparound stashing home his 13th goal of the season. Fazleev and Travis Sanheim garnered assists on the man-down conversion scored 16:36 into the second period, which marked Lehigh Valley’s fifth shorthanded goal scored this season.

All seemed in good shape for the Phantoms as Dustin Tokarski turned away one offering after another but the Comets kept coming and eventually broke through after pulling Demko. Rookie defenseman Philip Holm struck from center-point with just 57.5 seconds remaining with a seeing-eye shot that found the back of the cage for the equalizer.

In the 3-on-3 overtime, the Phantoms had an early chance when Will O’Neill raced after a puck in the corner and fired a centering pass to Chris Conner on the doorstep but the hot pass went through to the other side and Utica turned the opportunity into a 2-on-1 back the other way. Patrick Wiercioch carried up the left-wing in efforts to draw a commitment from Tokarski. Wiercioch then slid a smooth pass across to Hamilton on the backdoor who slammed home his second goal of the night for the winner. 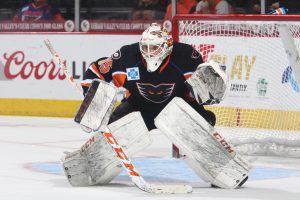 Before the dramatic finish came several opportunities for the Phantoms to build on their lead. Nic Aube-Kubel offered a blast off the post in the first period. And then it was Will O’Neill who was next to ring the iron with a shot top of the left circle in the second after a terrific cross-ice pass from Matt Read. Phil Varone along the end-boards set up Greg Carey who fired a shot from the left dot that was rocketed off the crossbar in the third period. And then a few minutes later Aube-Kubel was sprung free on a breakaway and found the post again. Aube-Kubel also showed some silky-smooth hands on his cut across to the slot for a quality backhander that was denied by a sprawling Demko to keep the Comets in the game.

Utica out shot the Phantoms 33-27. The Comets were 0-for-2 on the power while Lehigh Valley finished at 0-for-1.

Following the AHL’s All-Star break, the Phantoms return to action on Friday, February 2 when they welcome the Charlotte Checkers, AHL affiliate of the Carolina Hurricanes, to PPL Center for a 7:05 p.m. clash. A limited number of tickets remain for Friday’s game and are available HERE.