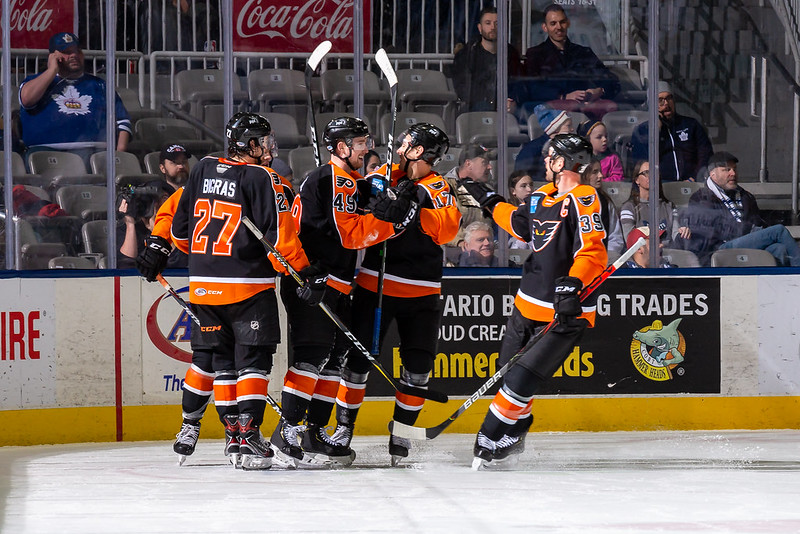 Toronto, Ontario – The Lehigh Valley Phantoms came out firing and then held off a Toronto Marlies surge at the end to secure their first win of 2020 in a 4-2 triumph on Sunday evening at Coca Cola Coliseum.

Pascal Laberge (7th) and Connor Bunnaman (3rd) both scored in back-to-back games to conclude the busy Canadian weekend while Gerry Fitzgerald (5th) scored for the third time in the last two weeks. Phantoms All-Star representative Morgan Frost (6th) sealed the decision with a late empty-netter in a homecoming for the Aurora, Ontario native just a few minutes from Toronto (20-12-3).

The Phantoms led 3-0 early in the third period before the Marlies would break through and make matters more dangerous down the stretch. Timothy Liljegren (4th) and Giovanni Fiore (1st) lit the lamp to give the hosts some life.

Lehigh Valley (13-18-5) was strong out of the gate with a pair of goals in the first period. Kurtis Gabriel fed Gerry Fitzgerald in the slot who offered a one-time drive to the stick-side of goaltender Joseph Woll to open the scoring.

About four minutes later it was Pascal Laberge rotating to the bottom of the left circle from behind the goal to one-time a nice cross-ice pass by German Rubtsov. Laberge’s sharp-angle was a terrific drive while falling over in one of the more spectacular goals of the season.

Alex Lyon was tested more in the second period with Toronto generating a couple of big chances down low and on the rush. The Phantoms held their 2-0 advantage through the middle frame setting up Bunnaman to score in the opening seconds of the final period for the second night in a row.

David Kase offered a hopper to the slot the handcuffed Woll allowing Bunnaman to swing or the far post from the right crease for his second consecutive goal from roughly the same spot on the ice at approximately the same time of the game as well.

Timothy Liljgren put the Marlies on the board on a give-and-go rushing acorss the line with Tyler Gaudet culminating in Liljgren’s chip home on the rush. 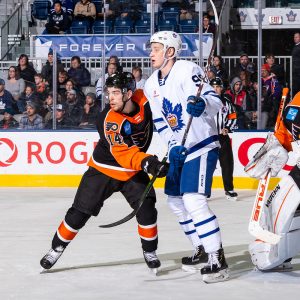 Giovanni Fiore made it a one-goal game with under 5:00 left on a delayed penalty call with his one-timer from the right dot for a 6-on-5 tally.

But the Phantoms successfully hung on from there and finished the deal with Frost’s empty-net conversion.

Lehigh Valley out shot the Marlies 35-27. Both teams were 0-for-2 on the power play.

Next up for Lehigh Valley is a Friday night encounter at the Utica Comets. The Phantoms return to PPL Center for Saturday and Sunday engagements against the Laval Rocket and Cleveland Monsters. Fans can purchase $20 tickets for the Phantoms’ first home games of 2020.