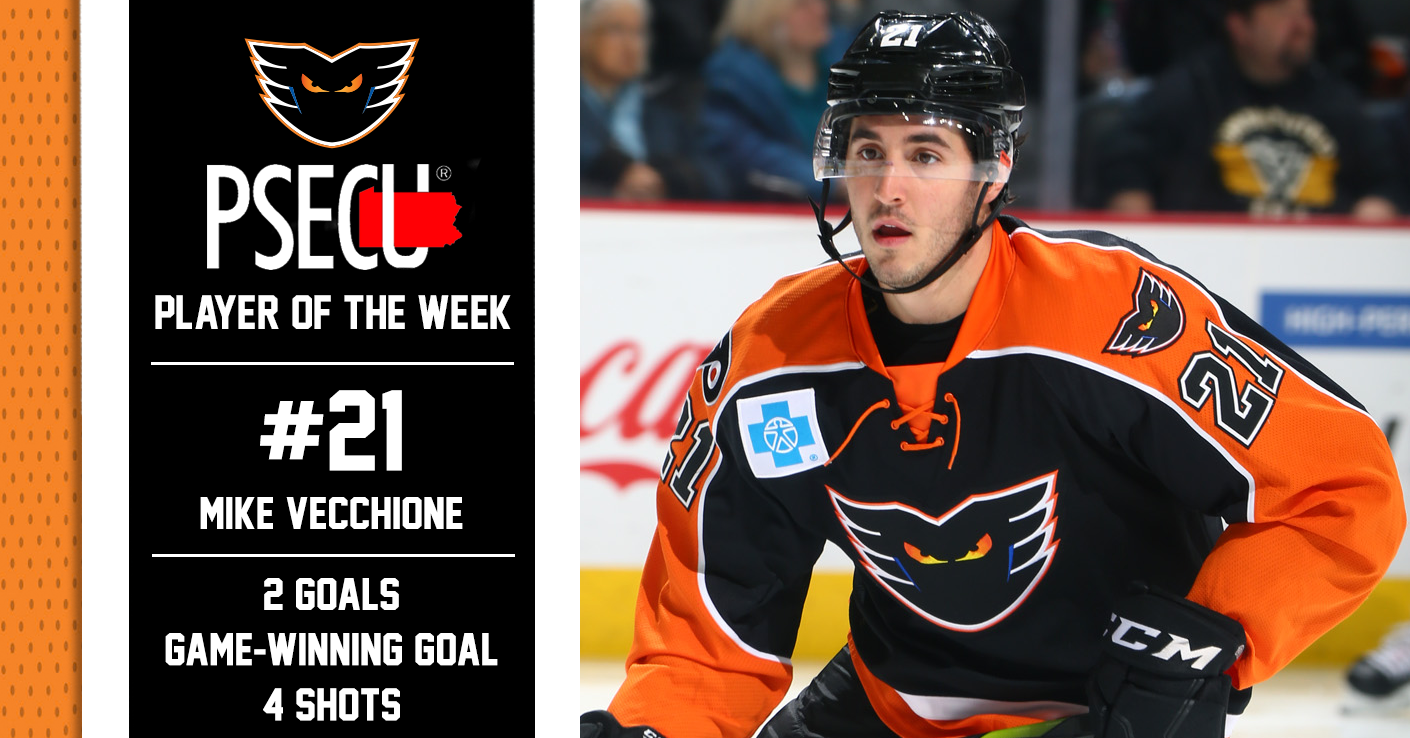 Lehigh Valley, Pa. — With a pair of goals in this past Friday’s contest against the Charlotte Checkers, Lehigh Valley Phantoms forward Mike Vecchione has been named the PSECU Player of the Week for the third time this season.

After topping the rival Wilkes-Barre/Scranton Penguins 3-1 on Wednesday night at Mohegan Sun Arena at Casey Plaza, the Phantoms returned home to PPL Center to start a five-game homestand beginning with a pair of contests against the first-place Charlotte Checkers on Friday and Sunday.

Friday’s meeting marked the third of the season between the two teams in downtown Allentown and while the first period was a back-and-forth affair, the game was scoreless after 20 minutes of play.

In the second period, the Phantoms were the first to break through thanks to a goal from team captain Colin McDonald, at the 6:49 mark of the period, when Tyrell Goulbourne caught the Checkers in a change and hit a streaking McDonald with a cross-ice pass.

4:59 later, Vecchione found the back of the net for his first of the night as a puck that was passed over to him on the backdoor from fellow forward David Kase squirted through the Charlotte defenders in front of the net.  The Union College product wasted little time slamming it home increasing the Lehigh Valley lead to 2-0 thanks to the power-play goal.

Another 4:59 later, while the Phantoms were on the penalty kill, Vecchione became the benefactor of a Mikhail Vorobyev outlet pass that sent him into the Charlotte zone on a breakaway.  With a defender on his back, Vecchione steered the puck in on his backhand before shifting to his right and putting the puck into the net on his forehand past the left pad of Checkers’ goaltender Alexander Nedeljkovic for his second shorthanded goal against Charlotte this season.

Despite a third-period comeback attempt from the Checkers, thanks to a pair of goals from Aleksi Saarela, Lehigh Valley hung on to defeat Charlotte 3-2.

Vecchione now has 15 goals on the season, just two shy of his 2017-18 total and career high of 17, to go along with 21 assists for 36 total points.  The 26-year-old center ranks fourth on the team in points and is tied for second in the goal scoring column.  Also, with 61 games played, Vecchione is one of only two players on the Phantoms roster that have appeared in every game this season.

With the win over the Checkers, the Phantoms are just a single spot out of the playoff picture, trailing the Providence Bruins by just five points as of Monday.