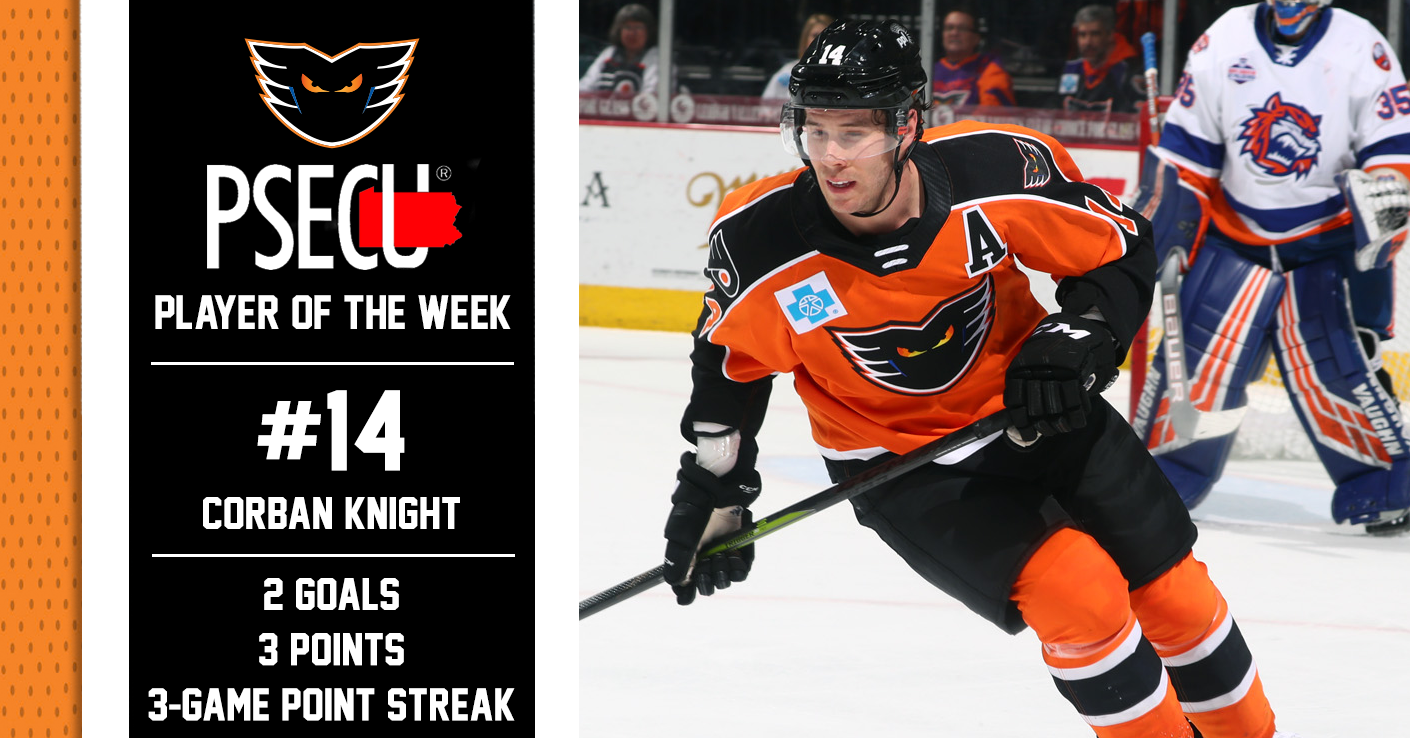 Lehigh Valley, Pa. — With two goals and an assist for three points in two games this past weekend as well as currently riding a three-game point streak in which he has five points (2G-3A), Lehigh Valley Phantoms forward Corban Knight has been named the PSECU Player of the Week for the first time this season.

Knight was loaned to the Phantoms on February 10 and played in his first game since October 27 while looking as fresh as ever as he recorded two points on the night in Lehigh Valley’s 5-2 victory over the Hartford Wolf Pack.  Knight, along with the Phantoms, began another three-in-three weekend with a contest against the Bridgeport Sound Tigers on Friday night inside of PPL Center.

While Bridgeport jumped out to 2-0 lead in the first period, Lehigh Valley battled back with a pair of goals from Greg Carey to knot the game at 2-2.  On the second goal, Knight won an offensive-zone faceoff that was pushed over to Chris Conner and later to a waiting Carey who popped it into the net past Sound Tigers’ goaltender Jeremy Smith just 34 seconds into the third period.

The Orange and Black went on to complete the comeback, defeating the Sound Tigers 4-3 in overtime.

On Saturday, the Phantoms traveled to Chocolatetown for the first game of a home-and-home series against the rival Hershey Bears.  Knight again showed little signs of rink rust as he scored the first goal of the contest at the 4:36 mark of the first period when he deflected in a T.J. Brennan point shot on the power play to make it 1-0.

Hershey would net a pair of power-play markers in the middle frame to take the lead, but Knight netted his second of the night with just 1:09 remaining in the third period to force overtime.  As he skated into the low slot, Knight received a pass from Carey and while his first shot was stopped, he collected the rebound and popped it into the net on the backhand.

Despite forcing extra time, Lehigh Valley would fall 3-2 by way of the shootout.

Since his reassignment from the Flyers, Knight has appeared in three games with the Phantoms and is currently riding a three-game points streak in which he has a total of five points (2G-3A).