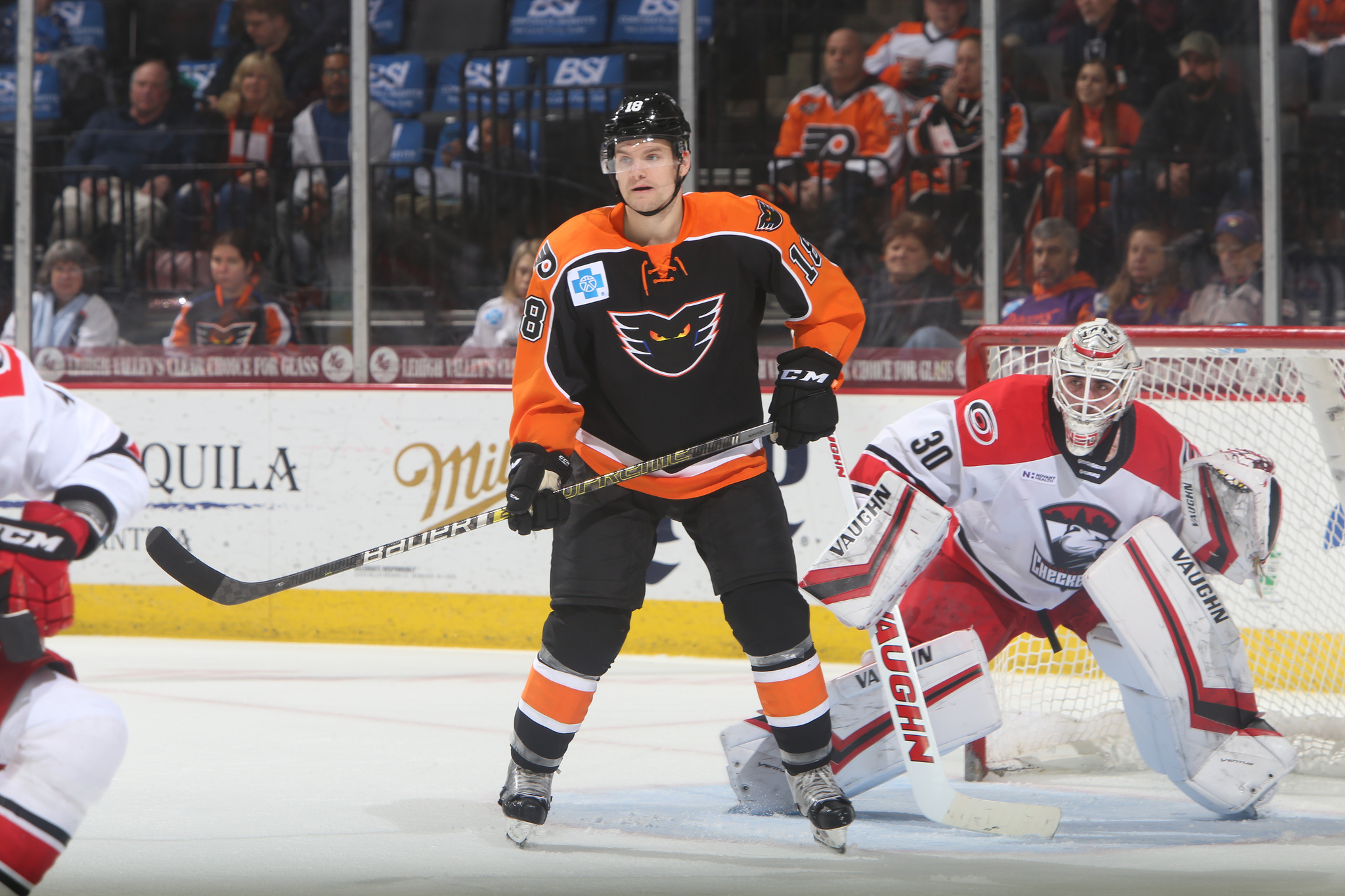 Lehigh Valley, Pa. – The Lehigh Valley Phantoms (30-25-3-3) were not able to complete the weekend sweep of the Charlotte Checkers (39-15-6-1) as they dropped a Sunday matinee 4-0. The Phantoms finish the season 2-2 against the Checkers inside PPL Center, and will meet for a final two games in Charlotte April 2nd and 3rd.

The Lehigh Valley Phantoms looked like they were going to tally a shorthanded goal for the second consecutive game, just minutes into this Sunday’s matinee contest. Tyrell Goulbourne dove in front of a Charlotte shot and the rebound was able to spring Cole Bardreau free the other way. Bardreau tried to beat Nedeljkovic glove-side but was unable to get one past the Checkers’ netminder, but did successfully kill off the penalty.

Despite the Phantoms looking strong early, it was Charlotte that got on the board first as they took a 1-0 lead 8:47 into the first period. Morgan Geekie was able to win a battle for the puck behind the Phantoms’ net and find Nick Schilkey cutting in front. As two Phantoms’ players collided with each other and went down, Schilkey was all alone and able to beat McKenna for his 14th goal of the season.

Lehigh Valley appeared to even the score with 1:25 remaining in the period but it was waved off for goaltender interference. The Checkers tried to flip the puck out of the zone but Zach Palmquist was able to catch the puck out of the air, drop it on the ice, and unload a rocket to the back of the net. After the officials got together, they ruled Nedeljkovic had been interfered with and overturned the call.

The Checkers stretched their lead to two less than a minute into the second frame. Trevor Carrick put a shot on goal that hit off defenseman Reece Willcox, who was tied up a Charlotte player in front of the net. Unfortunately the rebound found its way to Tomas Jurco who snapped in his 7th goal of the year.

Charlotte made it 3-0 with a goal in the third period as Nicolas Roy picked up his 15th of the season. After an unsuccessful Phantoms’ power play, Morgan Geekie intercepted a pass and fed it to Roy in the middle of the circles, and he fired a shot on net that redirected off a defender and in.

Nick Schilkey picked up his second goal of the game and 15th of the season to give the Checkers a 4-0 lead and Checkers held on for the victory to close out the weekend.

NEXT TIME OUT: Lehigh Valley will have a short break as they quickly return to the PPL Center ice for another Wednesday night rivalry matchup with Wilkes-Barre/Scranton Penguins on March 13 at 7:05. The game will be broadcast on the NHL Network.