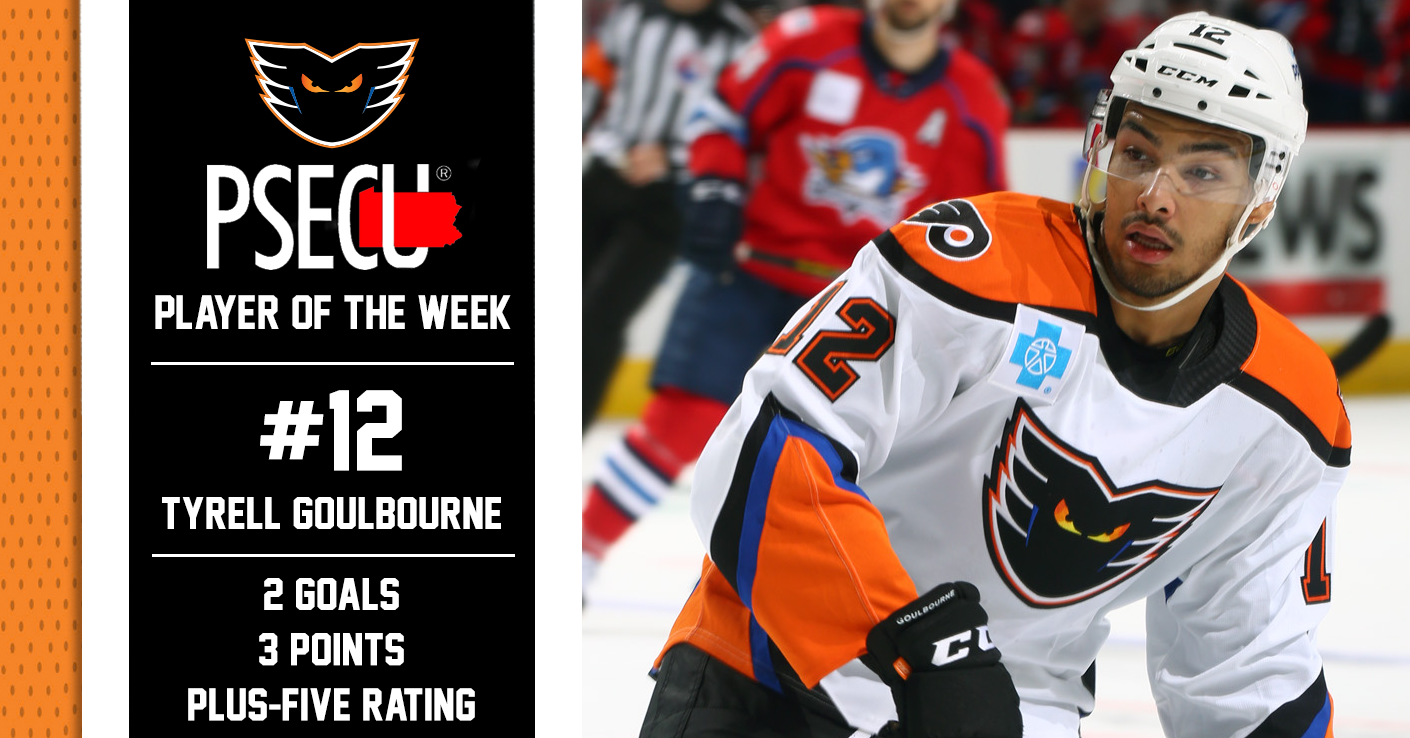 Lehigh Valley, Pa. — With two goals, three total points, a plus-five rating and a fight this past week, Lehigh Valley Phantoms forward Tyrell Goulbourne has been named the PSECU Player of the Week for the first time this season.

Lehigh Valley got right back to work after the holiday break, hitting the road for a Wednesday night contest against the rival Wilkes-Barre/Scranton Penguins.

Despite the Penguins finding the back of the net twice in the opening frame, the Phantoms broke through to cut the lead in half when Goulbourne sniped a shot, bar down, into the net after receiving a pass in the slot from defenseman Reece Willcox with under two minutes to play in the second period.

The Penguins, however, would net their second buzzer beater of the game, with just six seconds remaining, to stretch their lead to 3-1 heading into the second intermission.

After goals from Taylor Leier, at the 2:38 mark, and Connor Bunnaman, at the 13:23 mark, tied the game up at three for the Phantoms, Goulbourne would net his second goal of the contest, with just 1:02 remaining in regulation, after being absolutely robbed just seconds prior.

The initial chance, which was created off a rebound from a Philippe Myers point shot, was sticked away by Penguins’s goaltender Tristan Jarry.  Not to be denied, Goulbourne made good on his second attempt when he potted a Colin McDonald feed that came from behind the net, squeezing the puck between the goalie and post.

The goal, which was Goulbourne’s fifth of the season, went on to be the game winner and marked the second consecutive game in which Goulbourne netted a pair of goals.  The Phantoms would complete the comeback and bring home a 5-3, post-holiday victory.  Goulbourne finished the night with first-star honors as well as a plus-four rating, the highest single-game rating of his professional career.

On Saturday, Lehigh Valley returned home to host the Providence Bruins for the third time this season.  With just seconds remaining in the third period of the game, while the Phantoms held a 2-1 lead, Goulbourne made a huge shot block during a 6-on-3 penalty kill that allowed Philippe Myers to chip it all the way down the ice and into the net to secure the win for the Orange and Black.  The assist was Goulbourne’s fourth point of the week.

The Phantoms would improve their season record against the Bruins to 2-1-0-0 as they topped the visitors 3-1 in front of a sold-out crowd at PPL Center.

Goulbourne now has four goals and two assists for six points in his past four games and, overall, has 11 points (5G-6A) across 24 games with Lehigh Valley this season.