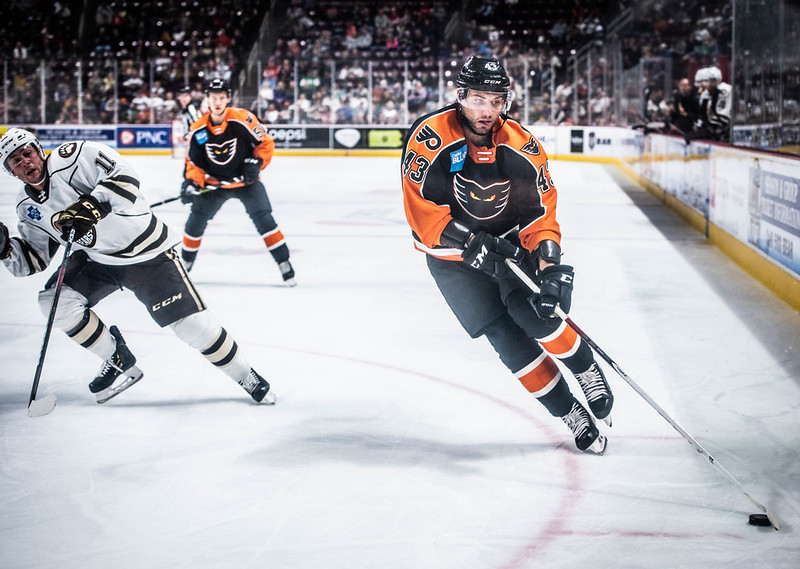 Hershey, Pa. – Morgan Frost struck for his team-leading fifth goal but Hershey produced a late tying conversion and ultimately prevailed in the shootout for a 3-2 decision against the Phantoms on Sunday evening. Lehigh Valley is opening a four-game road-trip while the team was wrapping up a weekend two-game home-and-home series against the Bears.

Kyle Criscuolo (4th) also scored for the Phantoms while J-F Berube stole the show and earned #1 Star of the Game honors with his sterling 35-save performance.

Lehigh Valley (6-2-5) has points in 11 out of 13 games this season and went to overtime on a sixth occasion. All three games between the Phantoms and Bears have been tied after sixty minutes and required extra hockey.

Hershey (7-5-3) never led at any point until the fourth round of the shootout. Steve Whitney (2nd) converted the tying goal with just 2:44 remaining to force overtime while Philippe Maillet (2nd) found the back of the net for the Bears on a second-period power play. 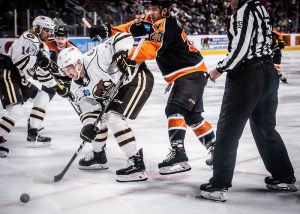 Criscuolo opened the scoring with his fourth goal in the last nine days by rushing up the middle to accept a sharp entry from Greg Carey angled from the left-boards. Carey’s pass was perfectly timed to connect with the speedy Criscuolo who chipped home the conversion at 14:32 in the game while Reece Willcox collected a secondary assist on the play.

Hershey responded with a power-play goal early in the second period with Maillet burying a rebound try after a hard shot by veteran Matt Moulson hit off the edge of the glove of Berube.

The game remained tied at 1-1 until just past the midway point of the game when David Kase picked off a clearing attempt at the Bears’ line and found Maksim Sushko moving up the right wing. Sushko flipped the centering pass wide of a diving Hershey defender to click with fellow rookie Frost busting up the middle ready to slam home his fifth of the season past Bears goalie Vitek Vanecek for a 2-1 lead.

Frost leads the Phantoms with five goals and twelve points and the talented Flyers first-rounder also rates second among AHL rookies in scoring.

Berube made a number of strong saves throughout the third period to keep the Phantoms ahead. And Lehigh Valley’s penalty kill pushed through back-to-back Hershey power plays midway through the third to maintain the one-goal advantage as well. 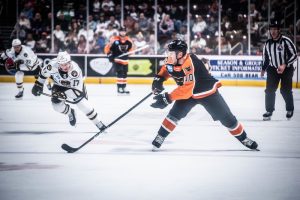 But Hershey equalized with 2:44 left when Liam O’Brien raced to the end-boards for his own chip-in and then found former Phantom Chris McCarthy to his right who located Steve Whitney out in front for the tying tally.

Andy Welinski almost scored his second consecutive overtime winner after Nicolas Aube-Kubel drove up the left boards and in behind the goal to set up the hard-shooting defenseman in the slot. But this time Welinski’s shot went just high and wide to keep the Bears in the game.

Hershey was awarded a full power play in the overtime but the Phantoms penalty kill prevailed to maintain the tie with a number of nice plays from several Phantoms including clears by German Rubtsov and Reece Willcox.

The Phantoms had their own power play at the end of the overtime but were unable to cash-in during their abbreviated opportunity.

Hershey out shot the Phantoms 38-27. The Bears went 1-for-5 on the power play while the Phantoms finished at 0-for-3.

The Lehigh Valley Phantoms continue their four-game road-trip in Springfield, Mass. with a Wednesday morning game beginning at 10:30 a.m. The Phantoms then travel to Binghamton and Wilkes-Barre on Friday and Saturday.

Next Time Out: The Phantoms four-game road-trip continues with a Wednesday morning game at Springfield starting at 10:30 a.m. The Phantoms return home on November 20th for a matchup against the Charlotte Checkers to begin a three-game homestand. Fans can still buy tickets for that game and all three games as part of Retro week on November 20, 22, and 23, HERE .