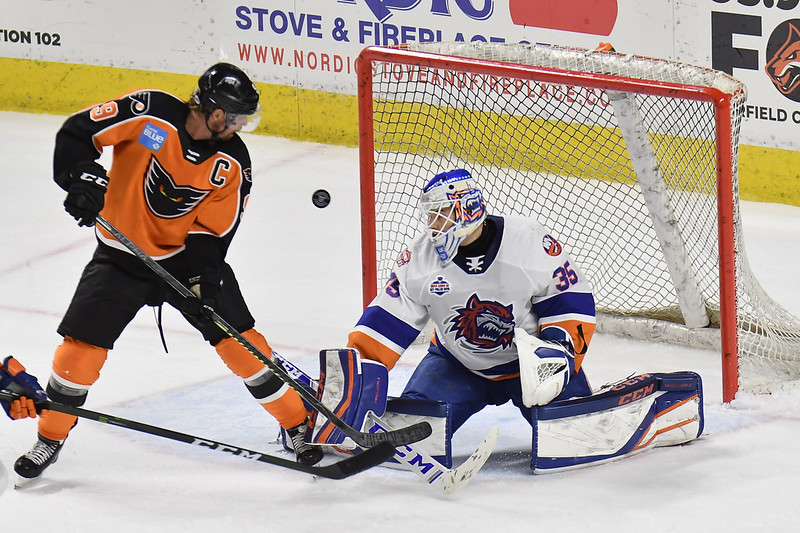 Bridgeport, Conn. – Morgan Frost gave the Phantoms a third-period lead with his fourth goal of the season but the Bridgeport Sound Tigers rallied with goals by young talents Simon Holmstrom and Otto Koivula to steal a 4-3 decision from the Lehigh Valley Phantoms on Sunday evening. Greg Carey offered a rocket from the right wing with 12 seconds left that blasted off the post and stayed out thus concluding the Phantoms’ eight-game point streak. 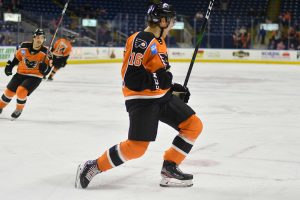 Bridgeport (2-7-3) snapped an eight-game winless skid on the back of 19-year-old goaltender Jakub Skarek who held off the Phantoms late surge. Otto Koivula returned from his first NHL call-up to the Islanders and scored the team’s first and last goals. 18-year-old first-rounder Simon Holmstrom scored in a second consecutive game against the Phantoms and David Quenneville also notched a tally on the power play.

Koivula opened the scoring with a power-play goal just 2:16 into the game. But Phantoms captain Cal O’Reilly responded in the period’s final minute by backhand corralling a drop-pass from Maksim Sushko and then gliding over to the left circle to snap his first as a Phantom to the far post past the glove of Skarek.

Lehigh Valley took its first lead of the game six minutes into the second period on the second redirection goal of the weekend for Nicolas Aube-Kubel. This time, Mark Friedman put the shot-pass onto Aube-Kubel’s stick from the left point for a 2-1 lead.

But David Quenneville’s power-play shot from the top of the left circle somehow squeezed through the right pad and blocker of Lyon barely making it across the goal-line for a tie game at 2-2 at the second intermission. 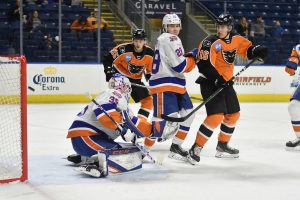 Morgan Frost dangled his way to a seven-game point streak with his fourth goal of the season early in the third period. Andy Welinski hustled to the right-wing corner to tip Ryan Bourque’s attempted breakout pass. In so doing, the loose puck tipped right into the possession of the talented 20-year-old first-rounder, Frost, who carried straight back to the high slot. Moving right-to-left, Frost took a peek over his shoulder and saw an opening through all the traffic to connect to the upper-far corner past the glove of Skarek for a 3-2 lead at 2:53.

But less than five minutes later, a point shot off Lyon bounced far enough away for Holmstrom to deposit the rebound for his second goal in North America. And just 2:31 later, Koivula’s deflection of a Parker Wotherspoon shot gave the Sound Tigers the lead at 4-3.

In Saturday’s game, it was Parker’s older brother, Tyler Wotherspoon, who provided the shot-pass to Nicolas Aube-Kubel for the winning goal in the third period. Then Parker Wotherspoon was denied on the backdoor for a would-be tying goal when J-F Berube came through with an incredible stop.

The Phantoms appeared on the verge of equalizing the contest but Andy Andreoff was somehow denied at the doorstep with 1:10 left while the puck was inches from the goal-line and Skarek was off to the side. A face-off win set up Lehigh Valley’s all-time leading goal scorer to try for his late tying goal of the weekend but Greg Carey’s blast with 12 seconds left rang off the far post and stayed out as Bridgeport sealed the win. 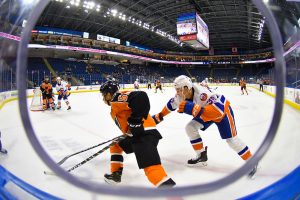 Lehigh Valley out shot Bridgeport 34-28. The Phantoms were 0-for-4 on the power play while the Sound Tigers finished at 2-for-4. The weekend represented the first two games of a sox-game season series. Colin McDonald of the Sound Tigers is scheduled to make his return to PPL Center on February 14 when the two Atlantic Division rivals next meet.

The Phantoms return to PPL Center this Wednesday and Saturday with consecutive home games against the Wilkes-Barre/Scranton Penguins and Hershey Bears. Wednesday is Military Appreciation Night. Fans have the opportunity to purchase ticket packages to be donated to area veterans and active military for the special evening.