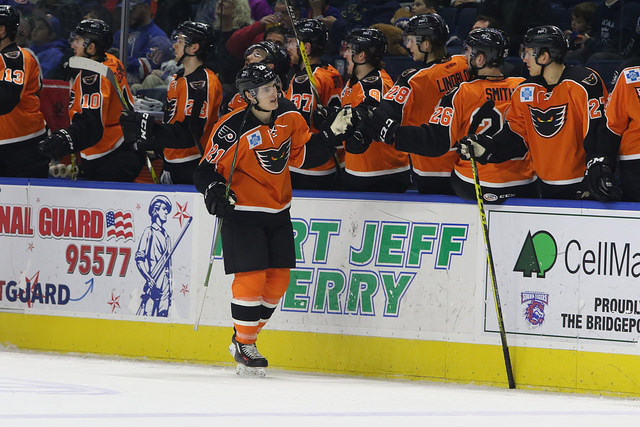 Bridgeport, CT – The future of the Lehigh Valley Phantoms was on full display on Sunday evening in Bridgeport, Connecticut. Four different rookies or second-year players scored goals in a 4-1 victory at the Bridgeport Sound Tigers on Sunday evening. Newcomers in their debut professional weekends Nic Aube-Kubel and Travis Sanheim notched their first career goal and point respectively.

That continued a stretch of firsts for the Lehigh Valley Phantoms over the past couple of weeks. On Saturday at PPL Center it was newcomer Oskar Lindblom with his first pro goal in North America and the previous weekend it was Steven Swavely and Reece Willcox both registering their first-ever goals as professional players. All had recently entered the professional ranks from college or Major Juniors.

Nic Aube-Kubel’s strike in the third period capped off his debut weekend for the Phantoms and represented the first professional goal for the 19-year-old talent. And 20-year-old Travis Sanheim recorded an assist for his first career point on a power-play tally by 21-year-old Robert Hagg (4th) in the first period. Taylor Leier, having turned just 22 years old a couple months ago, reached the 20-goal milestone in his sophomore season with the Phantoms while 20-year-old rookie Samuel Morin (4th) lit the lamp as well.

Anthony Stolarz, in his second season with the Phantoms and just 22 years old, had a fine bounce-back performance and was 18.7 seconds away from his first shutout of the season and third of his career but new Sound Tiger Tyler Barnes spoiled the blank sheet at the very end.

The Phantoms avenged the previous night’s home-ice 6-4 setback to the Sound Tigers by turning the tables on Bridgeport’s home ice. Lehigh Valley has won four consecutive road games and also six of their last seven overall. The Phantoms evened their overall record at 33-33-7 putting them in position to finish the year above the .500 mark if they can two out of three games next weekend.

The Phantoms largely dominated the play for the first two periods out-shooting the Sound Tigers 15-4 in the first frame and then 16-5 in the second for a combined total of 31-9 after 40 minutes. There were long stretches in which the puck hardly even approached Anthony Stolarz on the Phantoms end but when the Sound Tigers were able to muster a challenge, the big goalie from Edison, New Jersey was ready for it. He made a couple of fine kick stops with the right pad on big slapshots directed for the left-wing post.

Lehigh Valley scored the first of their two power-play goals just over eight minutes into the game. Straight off a face-off win, Travis Sanheim set up Robert Hagg on the right point whose snap-shot made it through Bridgeport netminder Parker Milner due to a nice screen by former Sound Tiger and Islander Colin McDonald. Hagg scored on a similar shot last Friday at St. John’s and now has two goals in his last five games as well as four on the season. Leier also tallied his 29th helper of the season on the play.

After dominating the first period, the Phantoms would pick up where they left off and would take mere seconds to double their advantage. Taylor Leier’s conversion in the crease came just 13 seconds after the center face-off thus representing the fastest goal to begin a period in the history of the Lehigh Valley Phantoms. Petr Straka held the previous record having scored at 15 seconds into a game on two different occasions including January 2 of this year at Portland and also December 17, 2014 against Binghamton. Colin McDonald cruised up the right wing for an open shot off Milner that set up the foot-race for the Leier goal. Reece Willcox also assisted on the rapid strike.

Another free puck in the crease would result in the next Phantoms goal as well. Phil DeSimone’s long stretch-pass connected with speedy Danick Martel flying up the left wing in the closing seconds of a power play. Martel’s blast from the left circle banged off the iron and then off the back of the goalie Milner. Bug, hulking blueliner Samuel Morin was the first one there and successfully knocked in the late second-period lamplighter to provide the Phantoms with a 3-0 advantage at the second intermission.

Capping the scoring for Lehigh Valley in the third period would be Aube-Kubel. Moments after almost setting up Mark Alt with a possible goal, Aube-Kubel would intercept a Bridgeport clearing attempt and quickly pick the top corner from the left circle over the right shoulder of Milner. The crafty and talented Aube-Kubel had 38 goals in the Quebec Major Junior Hockey League this season and now he was officially in the goal column at the professional level as well.

A redirected shot that was kicked out by Stolarz in the closing seconds was jumped on by Tyler Barnes to allow the Sound Tigers to avoid a shutout with just 18.7 seconds showing on the clock but that is perhaps all that went right for the Bridgeport skaters in this weekend-series finale.

The Phantoms out shot Bridgeport 39-28. Lehigh Valley went 2-7 on the power play while holding Bridgeport to 0-for-6. Lehigh Valley’s scorching hot penalty kill has surrendered just one man-advantage marker in the last 34 opponent power plays over the most recent seven games.

Dalton Smith dropped the gloves early with veteran tough-guy Matt Carkner in a bout that finished before it really had much of a chance to get started. Carkner got involved with the rough stuff again in the closing minutes when he and undersized Danick Martel exchanged unpleasantries. Martel offered a spear in retaliation for a Carkner hit and then Carkner proceeded to offer several punches to a fallen Martel in response. Both players were tossed from the game as were Lehigh Valley’s Phil DeSimone and Bridgeport’s Ben Holmstrom, a former captain of the Phantoms from 2011-14, who were the first to arrive to the fracas.

Just two home games remain in the regular season. The Lehigh Valley Phantoms strive for their 13th consecutive sellout when they host the rival Wilkes-Barre/Scranton Penguins on Friday, April 15 at PPL Center. The Phantoms conclude the 2015-16 campaign on Sunday, April 17 at 5:05 when the Syracuse Crunch come to town. A limited number of tickets remain for the last games of the year and can be secured online at pplcenter.com, by calling 610-347-TIXX [8499] or in-person at the Mealey’s Furniture Box Office at PPL Center [701 Hamilton Street].