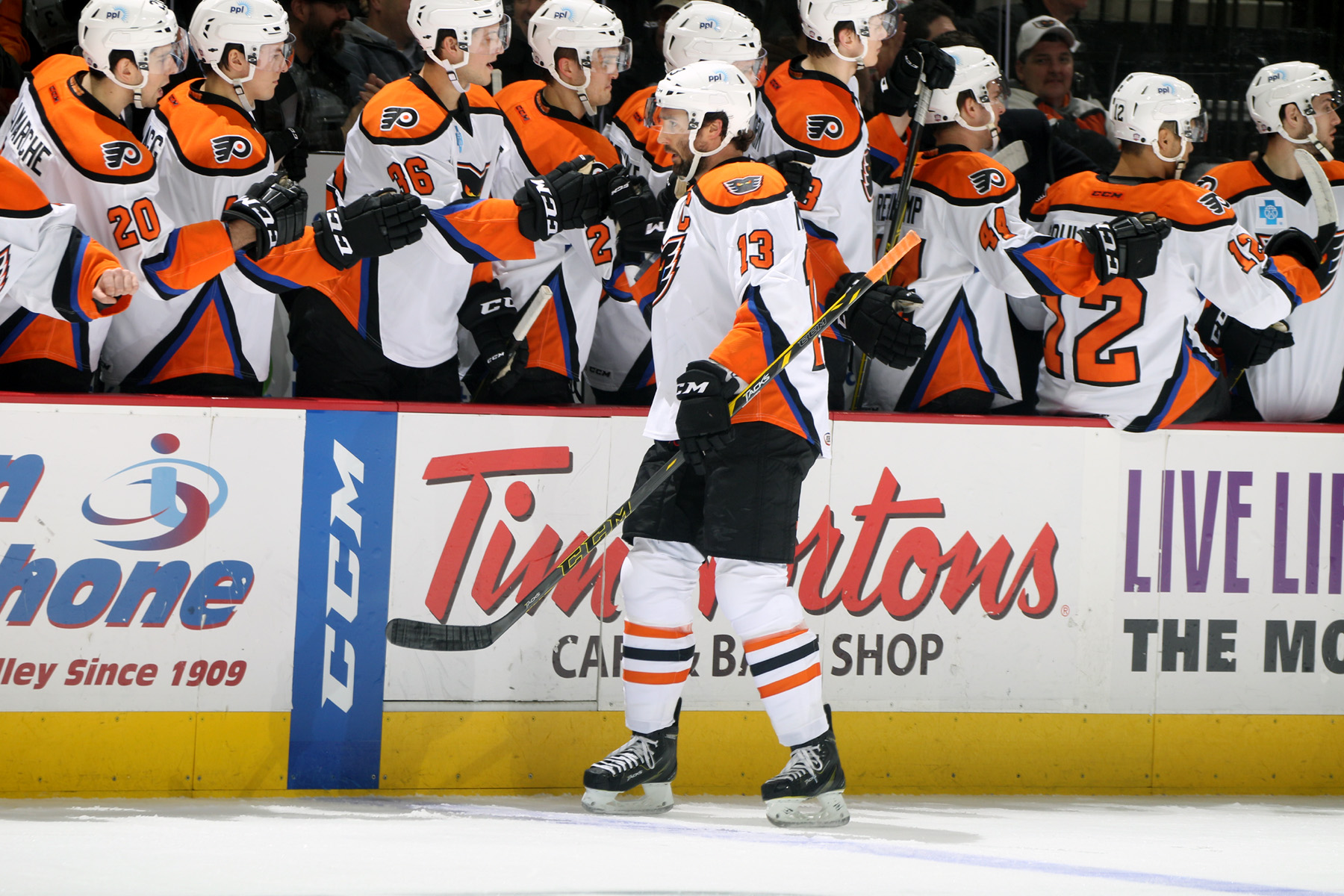 Winners of six of their last seven games, the red-hot Lehigh Valley Phantoms (33-33-7, 73 pts., 7th Atlantic Division) close the 2015-2016 regular season with three games this weekend, including tilts this Friday and Sunday at PPL Center. 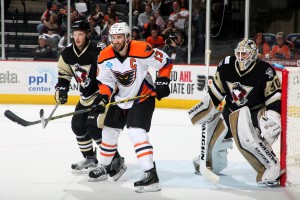 The Phantoms return to action this Friday, April 15 when they welcome the rival Wilkes-Barre/Scranton Penguins to downtown Allentown for the final time this season. Wilkes-Barre/Scranton (42-26-5, 89 pts., 2nd Atlantic Division) earned just one win in three tries last weekend and enters the week having claimed just two of the team’s last seven outings. Following a 4-0 loss at home to the Phantoms last Friday, the Penguins split a home-and-home series with the Hershey Bears earning a 4-3 victory at Giant Center in Hershey on Saturday before falling in a 5-3 decision at home to the Bears on Sunday.

Friday’s contest will mark the 12th and final meeting of the 2015-16 regular season between Lehigh Valley and Wilkes-Barre/Scranton with the Phantoms holding a 5-5-1 record against the Penguins. Lehigh Valley enters Friday’s showdown having claimed three of the last five head-to-head meetings, including a 4-0 triumph at Mohegan Sun Arena in Wilkes-Barre/Scranton last Friday evening in the most recent collision. 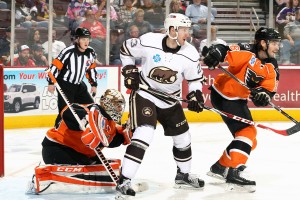 The Phantoms then hit the road for the final time this year on Saturday, April 16 when Lehigh Valley invades Giant Center in Hershey for a 7:00 p.m. tilt with the Bears. Hershey (41-20-12, 94 pts., 1st Atlantic Division) won two of three games last weekend and enters the week having won six of its last nine games overall. Around a 4-3 setback at home to Wilkes-Barre/Scranton on Saturday, the Bears captured a 5-1 win over the Bridgeport Sound Tigers on Friday followed by a 5-3 victory over the Penguins on Sunday. With three games remaining, Hershey is just two points shy of clinching the Atlantic Division regular season title.

Saturday’s contest will be the 12th and final meeting of the year between the Phantoms and Bears with Lehigh Valley holding a 6-5 mark against its in-state rivals. The Phantoms have claimed four of the last seven meetings in the season series and own a 3-2 record in games played at Giant Center in Hershey this season.

Be sure to catch all of Saturday evening’s action on FOX 1470-AM, online at www.fox1470.com or via the iHeartRadio app beginning with “Countdown to Faceoff” at 6:20 p.m. 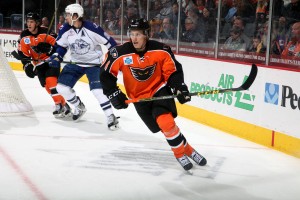 Lehigh Valley then caps the 2015-16 regular season on Sunday, April 17 when the Phantoms host the Syracuse Crunch, the AHL affiliate of the Tampa Bay Lightning, in a 5:05 p.m. showdown at PPL Center. Syracuse (32-27-14, 78 pts., 4th North Division) split a pair of games over the week but enters the week having won seven of its last 10 outings overall. After a 4-3 shootout loss at home to the Albany Devils last Friday, the Crunch responded Saturday with a 3-2 shootout win over the Toronto Marlies.

Sunday’s regular season finale will mark the fourth and final meeting of the 2015-16 season between Lehigh Valley and Syracuse with the Phantoms currently holding a 1-2 mark against the Crunch. After one-goal defeats in early October and early November, Lehigh Valley earned its first win in the season series with a 3-2 shootout victory in Syracuse on March 2 in the most recent collision.

A limited number of tickets remain for Friday and Sunday’s games at PPL Center and can be secured online at pplcenter.com, by calling 610-347-TIXX [8499] or in-person at the Mealey’s Furniture Box Office at PPL Center [701 Hamilton Street]. 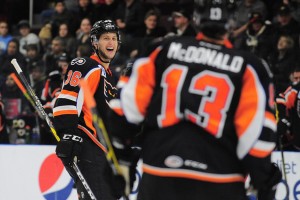 Adam Comrie (7th, 8th, 9th) scored three times and goaltender Martin Ouellette earned his first career AHL shutout with an impressive 40-save performance as the Lehigh Valley Phantoms earned their fifth straight win with a 4-0 victory over the Wilkes-Barre/Scranton Penguins at Mohegan Sun Arena. Tim Brent (9th) also found the back of the net for Lehigh Valley while Comrie netted the first hat trick by a Phantoms defenseman since Freddy Meyer accomplished the feat on February 21, 2004. 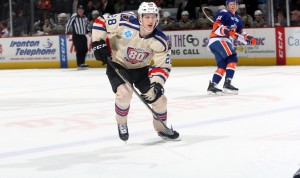 Oskar Lindblom (1st, 2nd) recorded two goals, including his first professional conversion, and added an assist as part of a ferocious Phantoms comeback but Lehigh Valley fell just short in a 6-4 decision to the Bridgeport Sound Tigers in front of 8,759 fans at PPL Center. Cole Bardreau (13th) and Colin McDonald (14th) also connected for Lehigh Valley as the Phantoms skated in front of their 12th straight standing room-only crowd at PPL Center.

Nic Aube-Kubel registered his first professional goal and Anthony Stolarz turned aside 27 of Bridgeport’s 28 total offerings as the Phantoms exacted a little revenge with a 4-1 triumph over the Sound Tigers at Webster Bank Arena. Taylor Leier (20th), Robert Hagg (4th) and Samuel Morin (4th) also found the back of the net for Lehigh Valley as the Phantoms claimed their sixth win over the team’s last seven games.

Service Electric’s TV2 Sports will be broadcasting live each of the Phantoms’ two remaining regular season home games. If you can’t make it out to the rink, be sure to catch all the exciting action live in HD quality with Steve Degler, Peter Zingoni, Doug Heater and Kristi Fulkerson! Pre-game coverage begins with “Phantoms Front and Center” 30 minutes before puck drop. And don’t miss “Phantoms – Breaking the Ice” every Monday from 7:00 – 7:30 p.m. throughout the season live at Chickie’s & Pete’s at PPL Center!

Tickets for each of the Phantoms’ two remaining regular season home games are available now online at pplcenter.com, by calling 610-347-TIXX [8499] or in-person at the Mealey’s Furniture Box Office at PPL Center (7th & Hamilton).

RISE UP! Don’t miss the action and fun of Lehigh Valley Phantoms hockey at PPL Center in downtown Allentown! Contact the Phantoms Front Office for information on season tickets and groups for the 2016-2017 season of Phantoms hockey by calling 610-224-GOAL [4625].