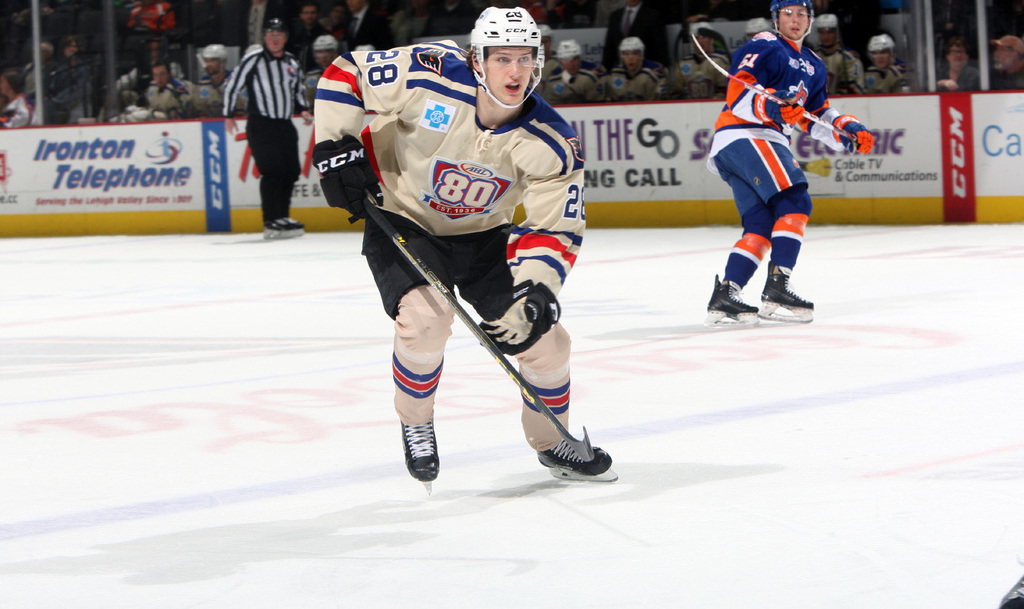 Lehigh Valley, PA – Another sellout crowd at PPL Center almost witnessed an All-Star Caliber comeback effort on the same day it was announced that the 2017 All-Star Classic is coming to the Lehigh Valley next season. The Phantoms closed a 5-2 deficit down to 5-4 in the closing minutes but Bridgeport’s late empty-netter allowed them to barely escape with a 6-4 decision on a snowy Saturday night in downtown Allentown.

19-year-old rookie Oskar Lindblom made his PPL Center debut one to remember. The newcomer from Sweden scored two goals and added one assist all coming in the dramatic third-period comeback effort. The game also marked the first look for the home fans of young newcomers Nic Aube-Kubel and Reece Wilcox.

Cole Bardreau (13th) and Colin McDonald (14th) also registered goals for the Phantoms in addition to the two knocked home by Lindblom while Anthony Stolarz returned to the crease for his first start since March 18. 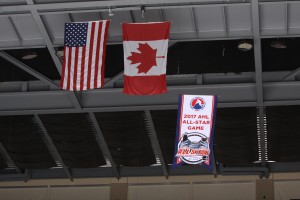 The celebration began before the game with the raising of the 2017 AHL All-Star Game banned. Then the President and CEO of the American Hockey League, David Andrews, addressed the crowd at center-ice: “The reason we’re coming is [The Brooks family and the founding partners] and this fantastic facility and all the amenities around it. But mostly it’s you. Thank you for you’re support and we’ll see you in January!”

Then the Lehigh Valley Phantoms took the ice wearing special, ultra-sharp looking beige jerseys celebrating the 80th Anniversary Season of the American Hockey League. It was a fitting tribute in honor of the league’s vast history while simultaneously looking ahead to the future 2017 All-Star Game excitement to come.

Andrews also personally witnessed the continued exceptional support provided by Phan Nation for their hometown team as the Phantoms played in front of a record-setting 23rd sellout of the season breaking the former mark of 22 sellouts established in the team’s inaugural campaign in the Lehigh Valley last year. The crowd of 8,749 also marked the 12th consecutive sellout game for the Phantoms.

The game itself raced out to a roaring start when Cole Bardreau dropped the gloves with Mike Halmo in the opening minute. In the extended and spirited bout both combatants would labd multiple punches. One of Bardreau’s shots on Halmo’s nose induced some blood that required Bardreau to wear a different jersey for the remainder of the first period. The rookie from Cornell donned number 16 while his regular number 9 uniform was being laundered. 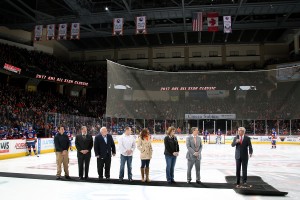 Bridgeport raced out to a 2-0 lead on the other side of that opening bout. Tyler Barnes walked to the slot just three minutes into his first game with the Sound Tigers for an open shot to start the scoring. And Jared Gomes snapped a wrister past Anthony Stolarz a couple minutes after the midway mark of the opening frame for a 2-0 margin.

Lehigh Valley came out roaring to open the second period and Bardreau, perhaps inspired with the return of his regular and freshly laundered jersey, received a nice feed from Mark Alt and was able to rifle home the team’s first goal of the night beating Bridgeport goaltender Stephon Williams five-hole.

Nic Aube-Kubel’s hard forecheck helped pop the puck free and set up Danick Martel for a potential tying tally but the blast from the right circle caromed off the iron and away. Mere seconds later the tables would turn with Mike Halmo scoring his 22nd of the season from the left circle just through the right arm of Stolarz. The goal was initially credited to Connor Jones as a close-range deflection but further video-analysis determined that Jones had not contacted the puck.

Trailing 3-1 in the third period, the Phantoms were not willing to surrender their five-game win streak easily. But Kane Lafranchise would notch his first of the year on a power-play drive from the left that escaped Stolarz view just long enough when it went through around the arm of a Phantoms defender in front of him. The fluky goal for the Sound Tigers ended Lehigh Valley’s penalty-kill streak of the last six games at 26 consecutive opponent power plays without allowing a man-advantage marker.

The Phantoms responded quickly and with renewed energy. Chris Conner behind the goal found Lindblom on the right of the cage who was perfectly able to chip his first-ever AHL goal to the far post. The lamplighter registered at 7:32 of the third period pulled the Phantoms to within a pair again at 4-2.

Another strange bounce would victimize the Phantoms a few minutes later when the Sound Tigers successfully converted following some speedy skating around the Lehigh Valley zone. Marc-Andre Cliche offered a shot from the left slot that hit off the stick of a Phantoms defenseman and fluttered into the air. The weirdly redirected puck arced over the left shoulder of Stolarz and landed in the net at 10:55 to once again put the Sound Tigers up by a three-goal margin at 5-2.

Lehigh Valley strung together a pair of late goals to reinvigorate the crowd and make the Sound Tigers scratch and claw their way to the decision. 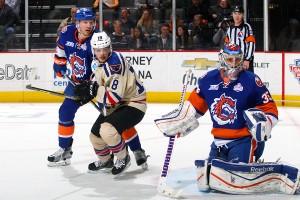 Robert Hagg’s shot from the slot bounced off the leg of Lindblom to the left of the cage to spark the rally with 4:05 to go. Lindblom’s second of his career cut the deficit to 5-3 and also earned Chris Conner his second helper of the game as well as his team-leading 38th assist and 54th point of the campaign.

Stepping up the attack, the Phantoms found themselves with an offensive-zone draw with 3:30 left and Scott Gordon determined the time was right for an extra attacker. With the pulled goalie and a 6-on-5 advantage, it didn’t take long for Lehigh Valley to strike again. Just 50 seconds after Lindblom’s goal it would be Colin McDonald from the left circle rattling a wrister around the top of the cage behind Williams to make it a 5-4 game with still 3:15 to go.

McDonald’s backhander from the left-wing a few seconds later appeared to briefly handcuff Williams but he was able to hang on. A chance for Taylor Leier was repelled as well.

With a late 6-on-4 attack stemming from a penalty by former Phantoms captain Ben Holmstrom, Bridgeport was finally able to pull off the escape-job when James Wright notched an empty-netter with just three seconds remaining.

Bridgeport out shot Lehigh Valley 30-28. The Sound tigers were 1-for-4 o nthe power play while the Phantoms finished at 0-for-4. The two teams will switch venues for their Sunday 5:05 rematch encounter traveling over to Webster Bank Arena in Bridgeport, CT.

Just two home games remain in the regular season. The Lehigh Valley Phantoms strive for their 13th consecutive sellout when they host the rival Wilkes-Barre/Scranton Penguins on Friday, April 15 at PPL Center. The Phantoms conclude the 2015-16 campaign on Sunday, April 17 at 5:05 when the Syracuse Crunch come to town. A limited number of tickets remain for the last games of the year and can be secured online at pplcenter.com, by calling 610-347-TIXX [8499] or in-person at the Mealey’s Furniture Box Office at PPL Center [701 Hamilton Street].