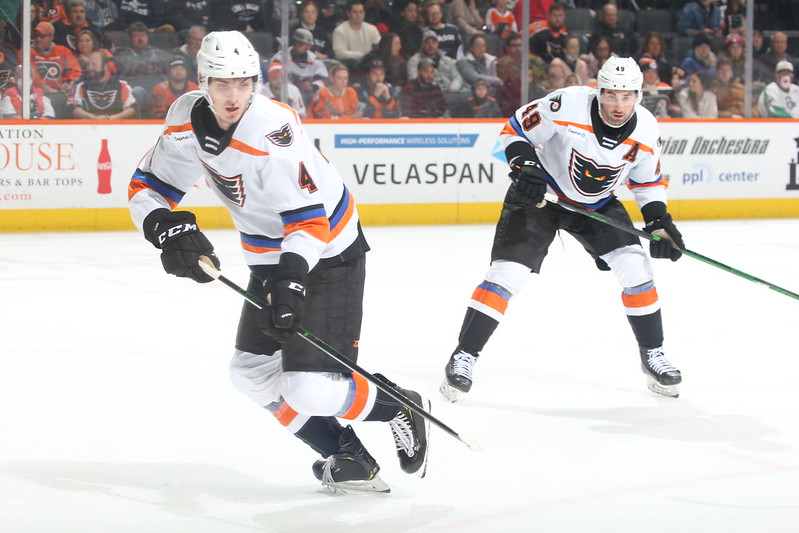 Lehigh Valley, PA – An electric and enthusiastic crowd welcomed the Phantoms back to PPL Center on Saturday night following the team’s four-game road-trip and were treated to an intense and energetic and well-played hockey game among other entertainment elements. Max Willman scored the team’s league-leading FIFTH shorthanded goal of the season assisted by Morgan Frost but the first-place Springfield Thunderbirds eventually pushed through for a 2-1 victory in overtime.

Hugh McGing buried the winner on a 2-on-1 in the OT after the Phantoms had some great chances through the second and third periods in the fast-paced battle. Three of the Phantoms’ five home games this season have gone to overtime. 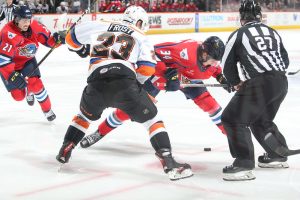 The Phantoms have scored four shorthanded goals in just over a week and now lead the league with five. Max Willman and Jackson Cates have two shorthanded goals apiece and are tied for the league lead in that category along with Ben Jones of the Henderson Silver Knights.

Max Willman has scored four goals in the last five games. Morgan Frost has scored 1-8-9 in the last seven games and has a four-game point streak with five assists in that stretch.

Springfield (9-2-2) had the early advantage to begin the game and were boosted by three power plays in the first period. But Lehigh Valley (3-7-3) had a penalty kill that was ready for the task and kept the Thunderbirds in check. Springfield did not generate much on its first two power plays as the Phantoms P.K. had numerous steals and clears. When Springfield pressured more successfully on its third power play it was Felix Sandstrom whom Lehigh Valley fans could count on to push the team through.

The Thunderbirds struck first with Tanner Kaspick getting to a free puck on the right of the cage on a rebound of a Scott Perunovich point shot. Kaspick flicked the backhander upstairs over the scrambling Sandstrom for a 1-0 lead in the opening minutes of the second period.

Shortly after the midway mark of the game, the Phantoms would strike shorthanded yet again. Morgan Frost aggressively hounded the puck at the left point and eventually poked it free from Nolan Stevens (son of former Philadelphia Phantoms head coach and captain John Stevens) to rush down ice with Max Willman for a 2-on-1. His slide across after a little move was perfect for Willman to draw goalie Charlie Lindgren to commit and then work around and slide it through to a mostly empty net that he had created thus forging a 1-1 tie.

The Phantoms turned it on even more in the late minutes of the second period. German Rubtsov’s line with Maksim Sushko and Hayden Hodgson caused all kinds of problems for the T-Birds as they kept the puck in the zone and continued generating chances. Brennan Saulnier and Jackson Cates had big drives on a sequence following one of the dominating shifts but Lindgren made the clutch stops.

Late in the third period, Morgan Frost connected across the line for Gerry Mayhew whose shot from the right dot was just barely saved by Lindgren. Another chance earlier in the period saw Garrett Wilson connecting with Lindgren who made one of his best saves of the game sliding to his right and somehow getting it to his left to keep the game deadlocked at 1-1. 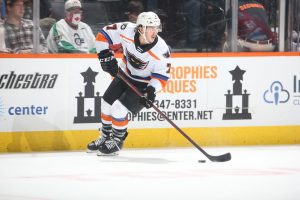 Cam York had a shot in the slot in the 3-on-3 overtime that Lindgren got a piece of and a couple minutes later it was Nathan Todd rushing up the left wing to find McGing on the backdoor for the game-winner which was also assisted by Perunovich.

It was the lowest scoring regulation total of the season for Springfield who had only one other game with just two goals which was their season opener. Since then, the Thunderbirds had at least three goals in each game..until tonight.

The Phantoms return to PPL Center on Wednesday  hosting the Charlotte Checkers on Military Appreciation Night presented by Netizen. Fans can purchase Military Packs to host local active military adn veterans for a night out at the Phantoms game! Email ticketsales@phantomshockey.com or call 610-224-4625 for more info.

Tickets for upcoming Phantoms games are available at PPLCenter.com