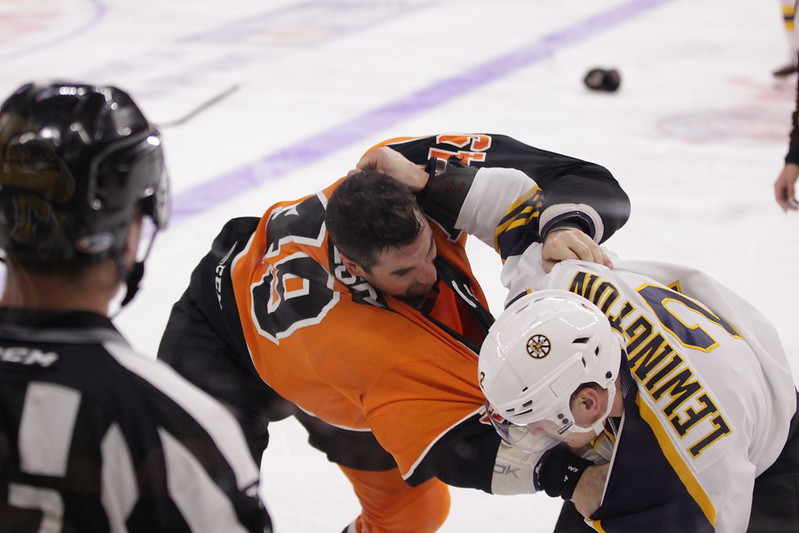 Garrett Wilson has Goal, Assist and Fight but P-Bruins Prevail 6-3

Providence, RI – Garrett Wilson led the Phantoms in point production and also in fisticuffs but the Providence Bruins were able to carry an early advantage to the finish line and survive 6-3 over Lehigh Valley on Friday night at Dunkin’ Donuts Center.

Wilson (2nd) along with Gerry Mayhew (6th) and Brennan Saulnier (1st) scored on the road for a Phantoms team that engaged in four separate fights in the feisty affair. Wilson notched a goal, an assist and a fight to record a rare “Gordie Howe Hat Trick” in the game. 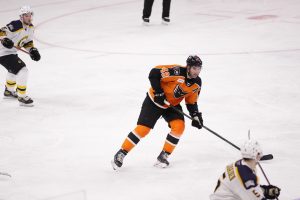 The P-Bruins were led by Zach Senyshyn who had a hat trick which included an empty-netter to thwart Lehigh Valley’s comeback effort.

Lehigh Valley (3-7-2) had its two-game win streak snapped and finished the four-game road-trip with a record of 2-2-0.

The Phantoms trailed 2-0 on a pair of Providence power play markers in the first by Matt Filipe and Steven Fogarty. But the Phantoms pushed back in the second period with Garrett Wilson’s second of the season on the deflection of an Egor Zamula shot from the left point.

Senyshyn rushed in shorthanded for a goal to get it right back for the Bruins at 3-1. Then he scored later on the in the period on a drop from Jesper Froden for a 4-1 lead.

Gerry Mayhew converted in the slot after a forecheck win for the puck for Wilson with Morgan Frost receiving the secondary assist and the Phantom were back to within two at the second break.

Felix Sandstrom replaced Kirill Ustimenko betwen the pipes to open the third period and Providence’s Jack Studnicka (2nd) scored from below the left dot in the third period’s opening minute for a 5-2 advantage.

The Phantoms had a strong surge back in the Bruins’ end for much of the third period including the first goal of the season from Brennan Saulnier from beneath the right dot assisted by Matt Strome. 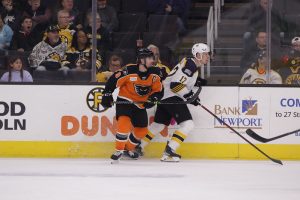 Lehigh Valley had some great chances to make it a one-goal game but Providence goalie Jon Gillies made some big saves to keep the Bruins comfortably up by two. Connor Bunnaman was denied in the slot off the rebound of a Max Willman shot. And a minute later Wilson’s deflection of a Zamula point shot was denied on a sparking left pad save by Gillies that was his best of the game.

Senyshyn scored at the empty-net late to finish the win for Providence (5-4-2).