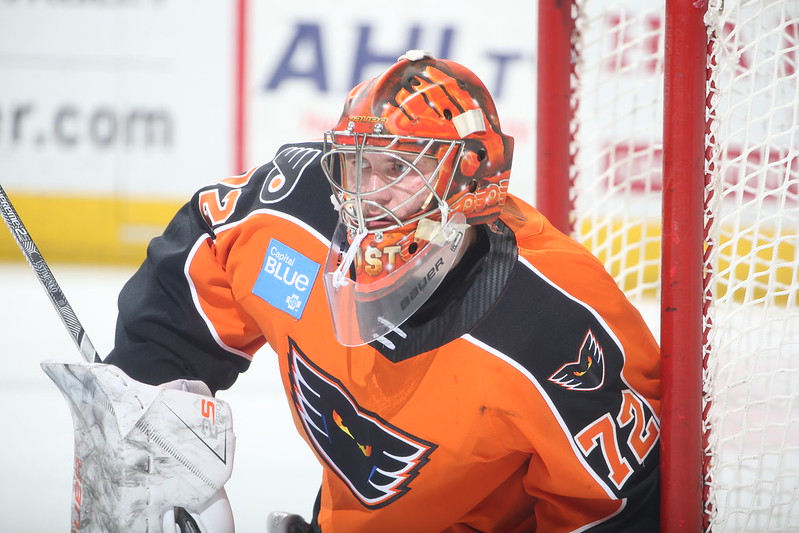 Defenseman Nick Seeler has been recalled to the Philadelphia Flyers.

Goaltender Kirill Ustimenko has been reassigned by the Philadelphia Flyers from the Lehigh Valley Phantoms to the Reading Royals of the ECHL.

Forward Charlie Gerard has been recalled by the Phantoms from the Reading Royals.

Seeler, 28, has yet to play in a game with the Phantoms this season despite appearing on the team’s roster a few times. Seeler has played in 11 games with the Flyers this season and has 116 NHL games in his career having also played with the Minnesota Wild and Chicago Blackhawks.

Ustimenko, 22, played in two games with the Phantoms, including one start, on his recent two-week stint with the team. He returns to Reading where he has played in one game so far this year. Ustimenko was a Flyers Round 3 selection in the 2017 NHL Entry Draft from Gomel, Belarus. His 2020-21 season was cut short when an injury required hip surgery.

Gerard, 25, rejoins the Phantoms after a quick one-game return with Reading on Saturday. The Minnesota-State product from Rocky River, Ohio has played in eight games with Reading scoring 2-2-4. He has yet to appear in a game with the Phantoms. Last year, he spent most of the season with the Utah Grizzlies of the ECHL where he scored 20-14-34 while also playing in eight games with the Colorado Eagles of the AHL where he scored one goal.

The Phantoms return to PPL Center Wednesday to take on the Charlotte Checkers on Military Appreciation Night presented by Netizen. Military Packs are available to send area active military and veterans to the game. Contact the Phantoms at ticketsales@phantomshockey.com for more information.

Purchase tickets to the game HERE