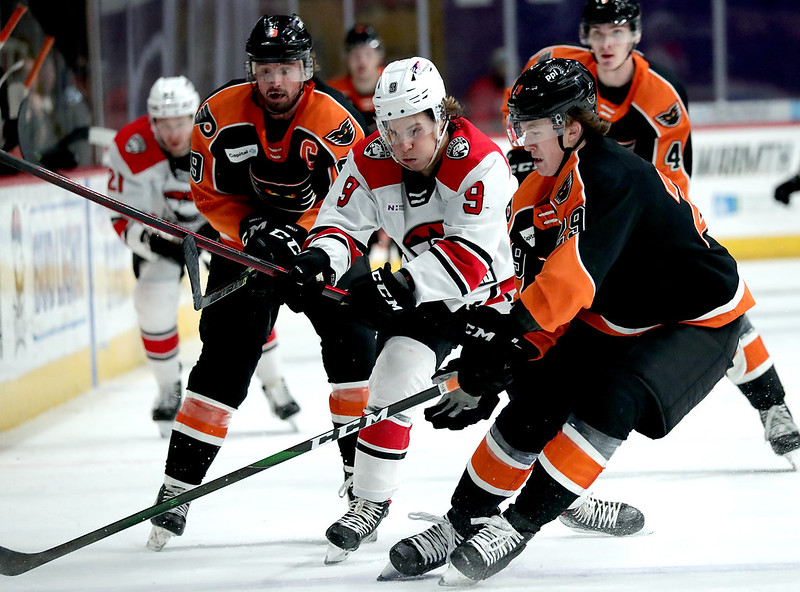 3 Assists for Wylie, 2 Goals for Hodgson

Charlotte, NC – Defenseman Wyatte Wylie led the way with three assists to push the Lehigh Valley Phantoms to a 5-2 win at the Charlotte Checkers in a Sunday afternoon weekend series finale. The Phantoms and Checkers split the two-game set. Hayden Hodgson (7, 8) scored a pair of goals for the Phantoms while Cal O’Reilly (6), Connor Bunnaman (6) and Matt Strome (1) also tallied in the victory.

The Phantoms are 2-1-0 so far on their stretch of five consecutive away games.

Lehigh Valley (12-13-8) opened the scoring just 90 seconds in on a power-play marker for O’Reilly on a blast from the top of the left circle set up by Adam Clendening. 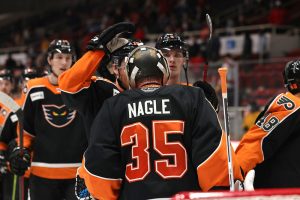 But Charlotte (19-15-2) quickly responded with a pair of goals in an impressive first period that included 16 shots against Pat Nagle. Max McCormick and Nolan Kneen put Charlotte ahead at 2-1 before the game had even reached the seven minute mark.

Pat Nagle made an impressive breakaway save on Alexander True late in the period to keep the Phantoms within a goal at the first intermission.

Connor Bunnaman converted down low on a shot that deflected off the left pad of Checkers goalie Billy Christopoulos and into the net. The set up by second-year pro Wyatte Wylie was good for the first of his career-best three assists on the game.

Wylie would set up the next goal on a center-point shot that was redirected to the left post by Strome for his first of the season to give the Phantoms a 3-2 lead in the second period. 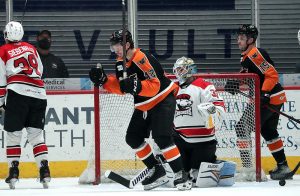 Lehigh Valley was clinging to its one-goal advantage through much of the third. Nagle made a huge breakaway stop on Kole Lind to keep the Phantoms ahead. With under three minutes left, Hodgson in the slot would tip a Wylie drive to the top corner for a 4-2 lead. Hodgson would seal the victory with an empty-netter to mark the second time he has scored two goals in a game this season.

The Phantoms are 2-2-0 in Charlotte this year and 2-4-0 overall against the Checkers. The team has no further visits to North Carolina on the schedule but the Checkers will return to PPL Center for a pair of games in March.

Lehigh Valley has a pair of away games on Friday and Saturday at the Springfield Thunderbirds and Hartford Wolf Pack to conclude its five-game road-swing.

The Phantoms return to PPL Center on Sunday, January 30 at 5:05 p.m. against the Hershey Bears on meLVin Kids Activity Book Night.