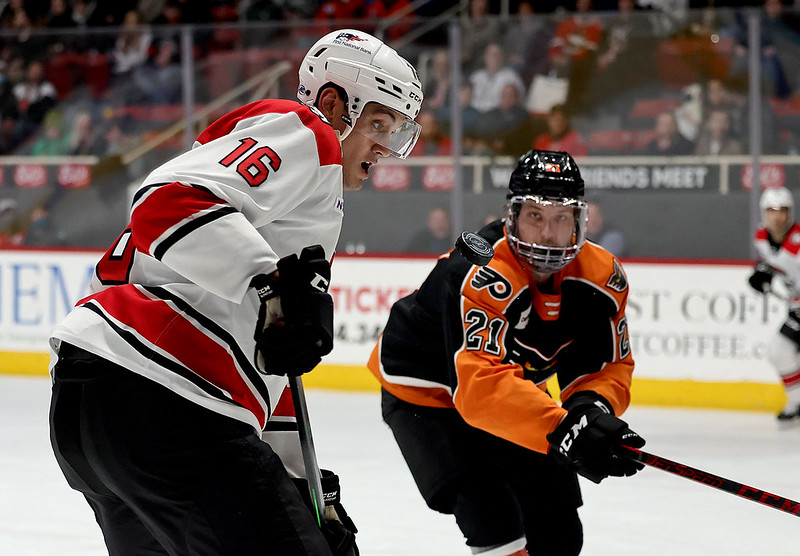 Charlotte, NC – Linus Sandin (5th) gave the Phantoms a 1-0 lead just past the midway mark but the Charlotte Checkers rallied with four goals in the third period in a 4-1 win over the Phantoms on Saturday afternoon at Bojangles’ Coliseum.

The setback is just the second regulation loss in the last 13 games for the Phantoms who are 8-2-3 in their run.

Felix Sandstrom (4-9-3) was on top of his game to start with two big breakaway denials in the first period robbing Max McCormick and Kole Lind.

But Sandstrom couldn’t come up with the answers down the stretch with Connor Carrick (5th), Kole Lind (11th) and captain Zac Dalpe (13th) turning the tables on the Phantoms with a quick spurt of three goals in five minutes. Alex True (8th) capped the victory with an empty-netter. McCormick drove the offense with three assists. 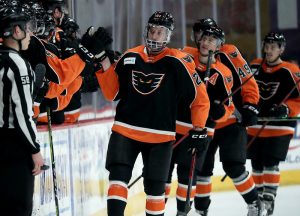 Linus Sandin stayed hot with his fifth goal in the last six games and his fourth goal in the last nine days. Cooper Zech found Connor Bunnaman in the slot whose shot hit off a Charlotte leg and bounced over to Sandin to the right of the goal-mouth. Charlotte goalie Billy Christopolous was unable to scramble into position in time allowing Sandin to put the Phantoms in front with 6:52 remaining in the second period.

But Charlotte(19-14-2)  surged back beginning with a shorthanded rush for Connor Carrick off a Max McCormick faceoff win. Just nine seconds into the Phantoms’ power play, Carrick shot on the rush from the right circle and beat Sandstrom five-hole to forge a 1-1 tie at 3:24 into the third period.

Kole Lind scored in a goal-mouth scramble after McCormick’s pass from behind the goal hit off a Phantoms’ leg. Sandstrom tried to come up with the cover but Lind dug the puck away to elevate it over the bodies in the crease giving the hosts the lead for the first time in the game at 2-1 with 12:45 remaining in the third.

Just 67 seconds later it was Zac Dalpe elevating a backhander on the rush from the left circle eluding Sandstrom’s glove hand for a 3-1.

Lehigh Valley briefly thought they had scored with about 7:00 left when Connor Bunnaman’s wrap-around was alive and Raliegh native Billy Christopolous perhaps carried it into the net wtih help from Garrett Wilson and Hayden Hodgson. But the play was whistled down and was ruled not a goal for the Phantoms.

Alex True finished the victory with his empty-net strike with 1:29 left.

Charlotte improved to 4-1-0 against the Phantoms.

The Phantoms and Checkers will rematch on Sunday at 1:00 at Bojangles’ Coliseum in Lehigh Valley’s last game in North Carolina this season. The Checkers still have two games in Allentown in March remaining on the schedule.

Lehigh Valley’s next home game is Sunday, January 30 at 5:05 p.m. against the Hershey Bears on meLVin Kids Activity Book Night.