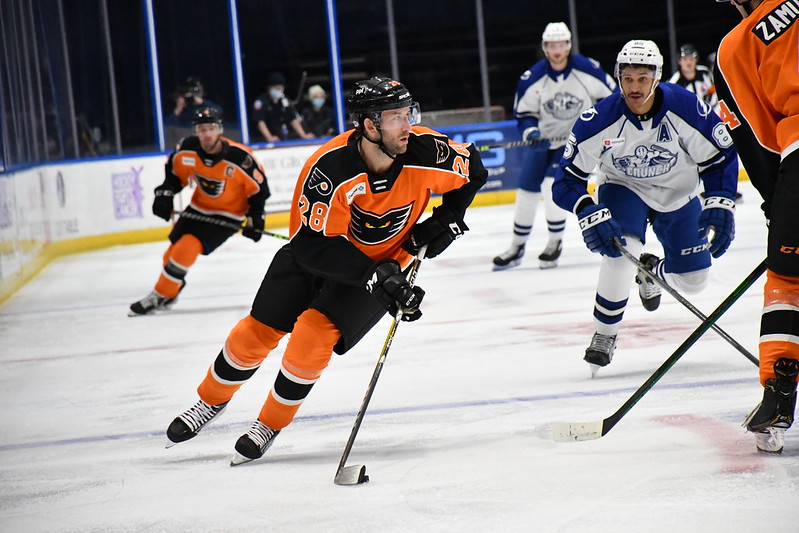 Syracuse, NY – Max Willman extended his latest goal-streak to three in his first game back with the Phantoms. But the Crunch scored four goals in the second half of the game to take a 4-1 decision on Friday night in Syracuse.

Willman was playing in his first game back with the Phantoms following a four-game stint with the Flyers. He had scored in back-to-back games with the Phantoms prior to his recall. Max Willman also has goals in six of his last seven games and leads Lehigh Valley with eight.

The game also marked the Phantoms debut for forward Nick Lappin who had signed a Professional Try Out contract earlier in the week.

The Phantoms charged out of the gates with an early edge to their game and a 10-3 shots advantage. Nine minutes into the period, Hayden Hodson hustled in to help pop the puck free on the forecheck. Jackson Cates from the left of the cage connected with Willman in the slot who blasted it home for the 1-0 lead.

The Crunch put their foot on the gas for the rest of the period forcing Felix Sandstrom to make a number of strong saves to preserve the lead. The play was a little more even in the second period but late in the frame, Cooper Zech took a retribution and frustration slashing penalty after he had absored a pair of hard collisions from Syracuse forecheckers. The Crunch converted mere seconds after the power play had expired on a strike from the left dot by Remi Elie for his third of the season to forge a 1-1 deadlock after 40 minutes.

Garrett Wilson was similarly tagged with an interferene penalty which he felt was undeserved and Syracuse again turned the opportunity into a goal shortly after the penalty had expired when Otto Somppi got a piece of a center-point shot with just 7:39 remaining to break the tie.

Just 64 seconds later it was Gabriel Dumont putting it home with 6:35 remaining for a 3-1 lead.

Daniel Wolcott raced out of the Crunch zone and scored the empty-netter with 1:38 left to complete the scoring. A Max Willman slashing penalty on Wolcott as he was scoring the finishing tally sparked a significant late-game skirmish that led to misconduct penalties on both sides including for Willman and Garrett Wilson for the Phantoms.

Up Next – The Phantoms return to PPL Center to take on the Bridgeport Islanders on Saturday Night Hockey Live featuring a live performance by LIQUID-A. Hockey Fights Cancer Night will feature a focus on our local cancer fighters.