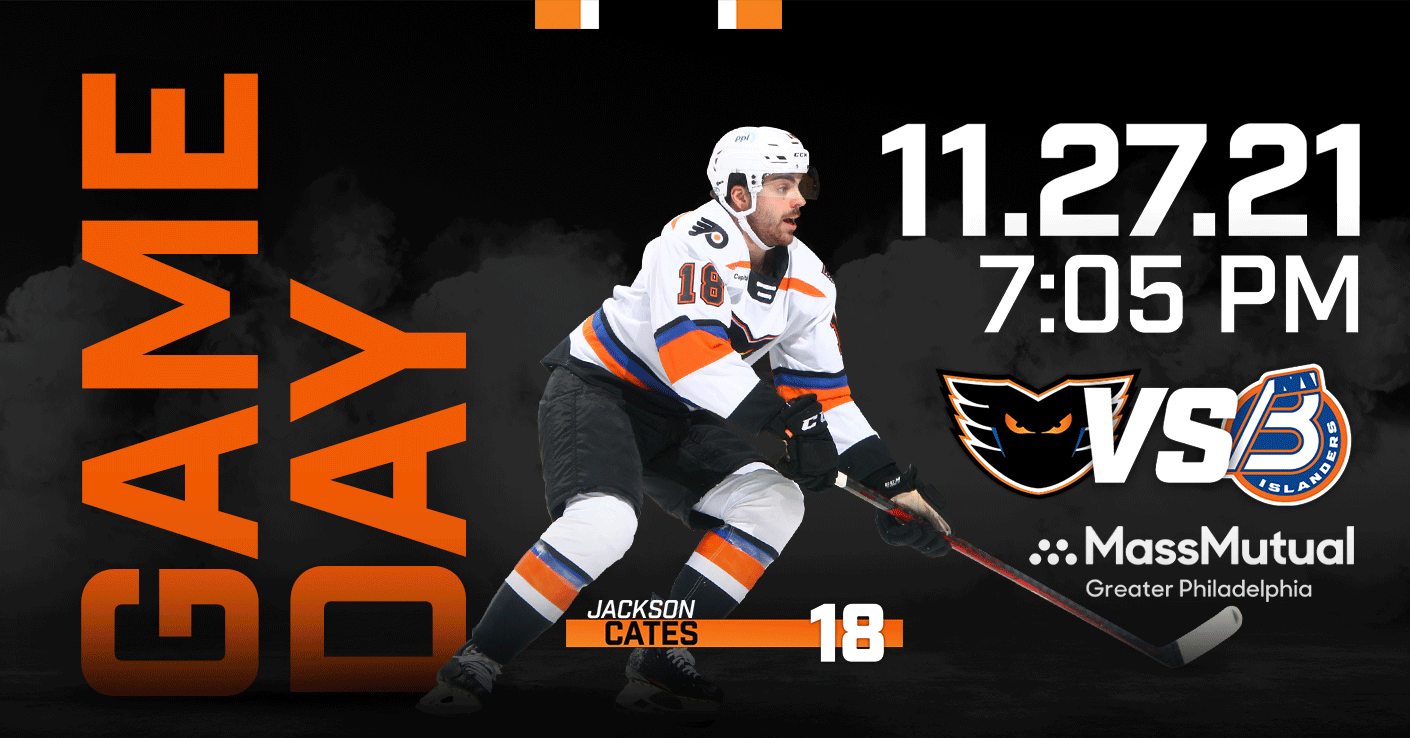 Tonight – It’s a Phantoms GAMEDAY presented by MassMutual as the Lehigh Valley Phantoms return to PPL Center for their first matchup of the season against the Bridgeport Islanders, AHL affiliate of the New York Islanders. It is Hockey Fights Cancer Night at PPL Center and also Saturday Night Hockey Live featuring LIQUID-A as our guest in our season-long concert series.

Last Time Out – The Phantoms took an early lead on Max Willman’s team-leading eighth goal of the season but Syracuse broke a late 1-1 tie with consecutive goals 64 seconds apart and then added an empty-netter at the end in a 4-1 final in central New York.

Bridgeport – The team formerly known as the Bridgeport Sound Tigers lost 3-2 against the Providence Bruins yesterday. The Islanders are winless in seven straight and are 5-11-3 overall. Phantoms alums Cole Bardreau and Andy Andreoff are unvailable for tonight’s game. Bardreau had just returned from an injury but is sidelined again. Andreoff has been recalled to the NHL with the New York Islanders. Veteran sniper Chris Terry leads active Islanders in scoring with 6-7-13 after the recall to New York of Otto Koivula.

Transactions – Morgan Frost received a recall to the Philadelphia Flyers and made his season debut in the NHL on Wednesday at the Florida Panthers. Frost scoed in consecutive games last weekend and leads the Phantoms with 15 points. He has played in 22 games with Philadelphia over the previous two seasons.

Max Willman has returned to the Phantoms after playing in four more games with the Flyers on his second recall. He has played in six games total with Philadelphia. The speedy winger from Cape Cod, Mass. is tied for the Phantoms lead with seven goals.

New Guys – The Phantoms added 6’6″ goalie Jon Gillies and forward Nick Lappin on professional tryout contracts. The Phantoms just saw Gillies a couple weeks ago when he was on a PTO with the Providence Bruins. Gillies made 31 saves and beat the Phantoms 6-3. Lappin has played in 60 NHL games with the New Jersey Devils. In the 2017-18 season he finished fourth in the AHL with 31 goals. The Brown University product had been college teammates with Max Willman.

Friday morning, the Phantoms announced the additions of two more PTO players to help bolster the roster. Nick Master joins the Phantoms from the Maine Mariners of the ECHL. He played in two preseason games with Lehigh Valley and is a Broomall, Pa. native who won three straight Flyers Cups at La Salle College High School.

Wes Michaud is a University of North Dakota and Colorado College product who most recently played with the Kansas City Mavericks of the ECHL. The speedy forward from Esko, Minn. spent his rookie professional season last year with the AHL’s Manitoba Moose.

Up Next – The Phantoms travel to Chocolatetown for Game 3 out of 14 in the rivalry with the Hershey Bears. Sunday evening Puck Drop is slated for 5:00 p.m.