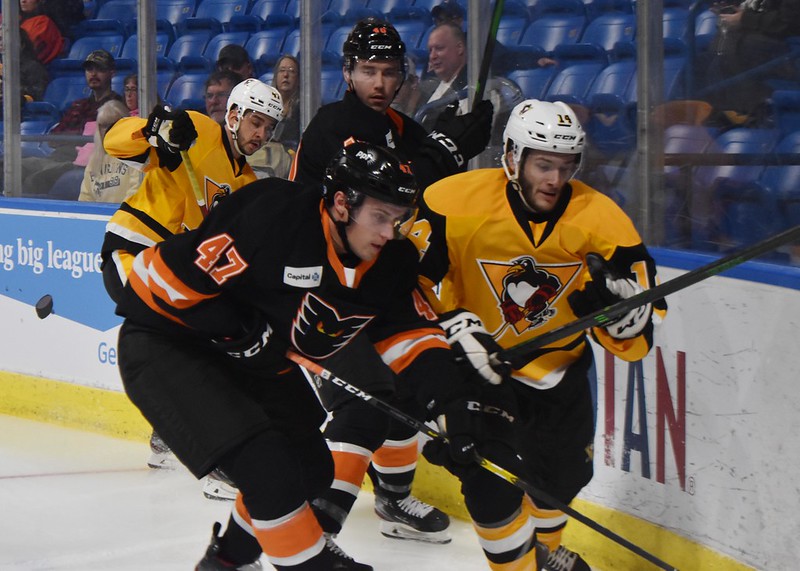 Lehigh Valley, PA – The Lehigh Valley Phantoms have announced that they have added three players. Forwards Nick Master and Wes Michaud have signed PTO (Professional Try Out) contracts and defenseman Ryan MacKinnon returns to the Phantoms after a brief loan to Reading of the ECHL.

Master, 26, has played in 10 games with the Maine Mariners of the ECHL scoring 2-7-9 this season. Last year, Master player for the Knoxville Ice Bears of the SPHL scoring 8-18-26 in 36 games while the Mariners season was cancelled.

Master participated with the Phantoms in training camp as a non-roster invitee this past October and played in two preseason games. The Broomall, PA native out of UMass-Lowell played for three years in the Philadelphia Junior Flyers program and starred at La Salle College High School where he won three straight Flyers Cup Championships (Philadelphia Area High School Championships) as well as a AAA Pennsylvania State Championship on March 25, 2012 in which he scored a goal in a 6-2 win over Bethel Park.

Michaud, 26, is in his second season of professional hockey. Earlier this year with the Kansas City Mavericks of the ECHL he scored 4-6-10 in nine games while on an AHL contract with the Stockton Heat. Last year, he played in 18 games for the Manitoba Moose of the AHL scoring 1-1-2. The 5’10” lefty shooter from Esko, MN played three seasons at Colorado College and transfered to the University of North Dakota for his final season in 2019-20.

Michaud had three consecutive seasons of double-digit goals including a career-best 16 goals with North Dakota when he earned NCHC Honorable Mentional All-Star Team honors and helped the Fighting Hawks to the Penrose Cup for the NCHC Regular Season Championship. He scored 45-45-90 in 149 games in his four years of NCAA hockey. 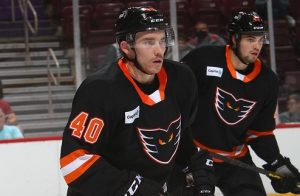 MacKinnon, 27, returns to the Lehigh Valley Phantoms following another quick loan to the Reading Royals in which he did not play in a game. The native of Summerside, Prince Edward Island has played in four games with the Phantoms this season and 21 career AHL games via previous stints with the Bridgeport Sound Tigers including six games with Bridgeport last year. He has played in 124 career ECHL games with the Worcester Railers scoring 11-39-50.

MacKinnon was captain of his Major Juniors teams in the QMJHL with the Rimouski Oceanic and Charlottetown Islanders in 2013-14 and 2014-15 before playing for three seasons of Canadian collegiate hockey at the University of Prince Edward Island 2015-18.

The Phantoms are in action Friday night at the Syracuse Crunch.