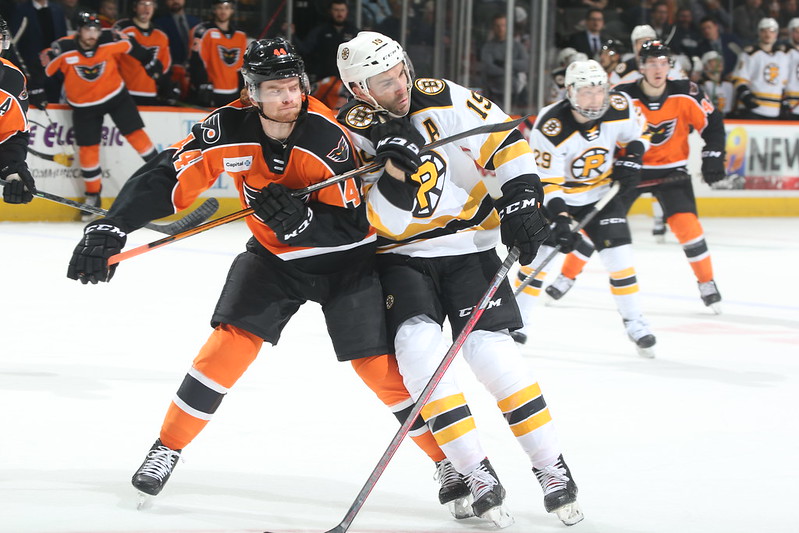 Lehigh Valley, PA – The Lehigh Valley Phantoms had the better of the play in the third period but were unable to find the tying goal as the Providence Bruins escaped with a 5-3 victory on Wednesday night in an exciting batte at PPL Center. Cam York (2nd), Hayden Hodgson (16th) and Matt Strome (3rd) all scored for the Phantoms while Morgan Frost generated several strong scoring chances in his first game back with Lehigh Valley.

Zach Senyshyn (15th, 16th) paced the P-Bruins’ attack with a pair of goals while Kyle Keyser made some key saves down the stretch after entering in relief of injured starter Troy Grosenick.

Lehigh Valley (18-21-10) fell behind 2-0 in the first period despite an early shots advantage. But a Senyshyn breakaway goal 5:32 into the contest on the first shot of the game for Providence was shortly thereafter followed by a Steven Fogarty (9th) tally in front after Wyatte Wylie had been tripped up at the end-boards. 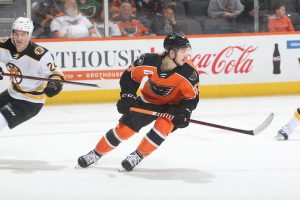 The Phantoms were largely still carrying the play though and would break through late in the first period with Cam York walking to the left dot and whipping his second goal of the season over the right shoulder of Grosenick and off the underside of the crossbar to get the Phantoms on the board. Wyatte Wylie and Maksim Sushko assisted on the play with 2:44 remaining in the first period as the Phantoms trailed 2-1 at the first intermission.

Lehigh Valley continued to surge back and took the lead in the early minutes of the second period scoring a pair of goals just 64 seconds apart to rudely welcome Keyser into the game. Troy Grosenick went down with an injury in efforts to cut off an angle of a quickly developing breakaway for Alexis D’Aoust. Grosenick also made an impressive save on Tanner Laczynski following a Providence turnover just moments after his initial injury. After it was determined that Grosenick would be unable to stay in the game, the Phantoms went to work on the relief netminder.

Hayden Hodgson had an impressive turnaround in the left slot in which he managed to get off a strong shot that beat Keyser to the game at 2-2 with 14:30 remaining in the second. Garrett Wilson had a strong assist from the left boards to connect with Hodgson in the middle.

Then Egor Zamula had a rising shot from left point that Keyser fought off but the bounce came over to Strome on the right of the cage for the timely putback to push the Phantoms ahead at 3-2. Adam Clendening’s assist on the play was his team-leading 25th helper of the season. Lehigh Valley had scored two times on two shots against Keyser and had taken momentum in the game.

But Senyshyn would strike again for Providence (25-14-6) with 1o:55 left in the second period with his second goal of the game when he deflected a power-play point drive from defenseman Viktor Berglund and the two teams maintained their 3-3 deadlock through the rest of the second period.

Adam Clendening offered a hard shove on Providence center Samuel Asselin late in the second period which drew the attention of young Bruins’ prospect Jack Studnicka who was assessed a 10-mniute misconduct in his retaliation efforts when he got to Clendening from behind.

Hayden Hodgson dealt a massive hit to open the third period that sparked a fight with Providence captain Josiah Didier. Hodgson won the fight but also was tagged with a five-minute interference penalty and a game misconduct. Providence broke the 3-3 tie just nine seconds into their subsequent power play on Justin Brazeau’s (10th) tip of a point-shot by Oskar Steen.

Linus Hogberg raced away shorthanded and took the puck to the net in efforts for his first goal of the season but was denied on the breakaway while he was also tripped up on the play. He collided with Bruins’ goalie Kyle Keyser who was down for a significant stretch but ultimately was able to stay in the game.

The Phantoms kept pushing in the third period for the equalizer. Frost had a strong backhand spin move from the right dot that just missed on the far post side and the team generated several other strong chances against Keyser as well. But the Bruins eventually sealed the victory with an empty-netter from Joona Koppanen (10th) to conclude the see-saw affair.

The homestand continues with a pair of games on Friday and Saturday against the Charlotte Checkers as the Phantoms celebrate their 25th Anniversary throughout the weekend.