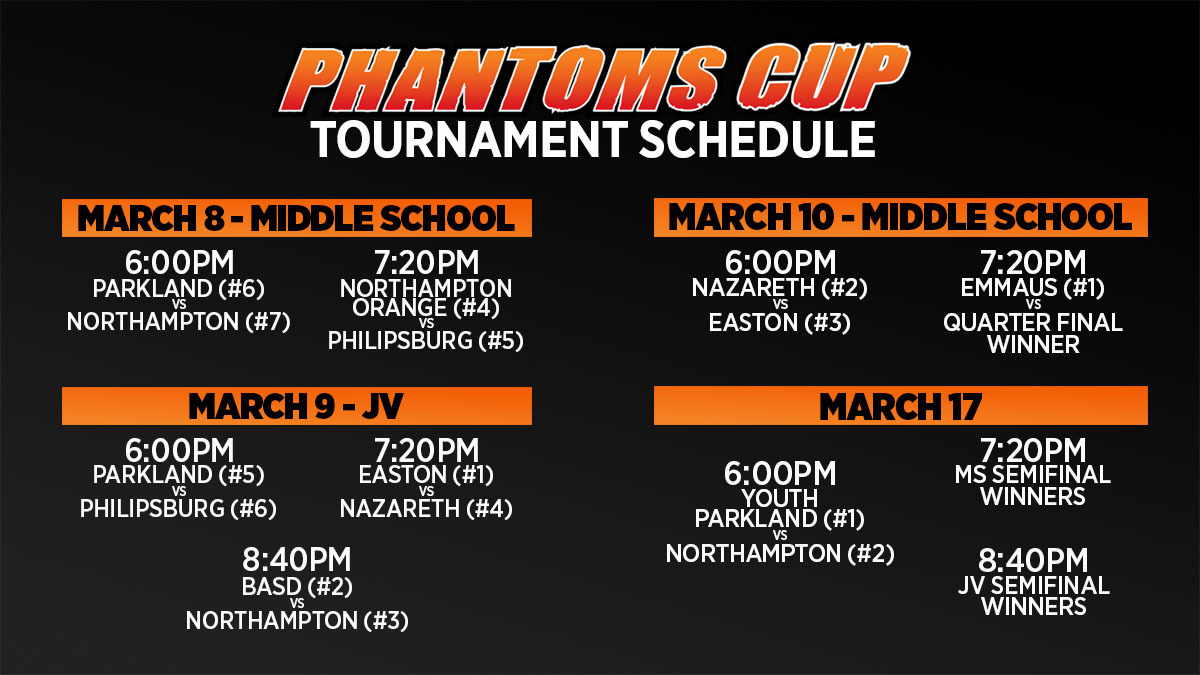 Lehigh Valley, PA – Get ready to cheer! The Lehigh Valley Phantoms and PPL Center are thrilled to announce the creation of the inaugural Phantoms Cup tournament which will debut in March. The exciting, new tournament will allow area teams and kids from the Lehigh Valley Scholastic Hockey League the chance to compete for a championship in a big league setting at PPL Center.

“We are very proud of our role in driving the rapid growth and popularity of youth hockey in the Lehigh Valley,” Phantoms Co-Owner Jim Brooks said. “What an exciting opportunity for these kids to experience the thrill of playoffs in the same building as the professionals, PPL Center, and getting to do so while wearing their school colors.  I know it means a lot to these kids to represent their schools and show off their school spirit.”

The inaugural Phantoms Cup will include playoff tournaments for three levels – Youth, Middle School and Junior Varsity. In future seasons, there will also be a Varsity tournament added to the Phantoms Cup

“What a thrill it will be for these area kids to get to compete in these tournaments in the same PPL Center where the Phantoms play,” said Phantoms Director of Ticket Sales, Trevor Herrick. “These kids already come to PPL Center to cheer for their favorite players and watch the future NHL stars. And now they get to play for their own championship in the very same venue. This tournament will undoubtedly provide a significant benefit and boost to the continued growth and success of youth hockey in the Lehigh Valley region.”

“It will be so great to see fans, friends, families and teachers coming together to cheer for their teams at PPL Center,” Phantoms Executive Vice President Chris Porreca said. “My own boys have benefitted from the opportunities of the youth hockey programs available in the Lehigh Valley. There are so many passionate and dedicated people involved who already make this such a great experience for the kids. Bringing in all of these players and teams to PPL Center, as well as everyone who will be cheering for them, will enhance those efforts.”

Teams in the Lehigh Valley Scholastic Hockey League continue to compete for their respective seeding in the tournament which will be based on the regular season standings.

The scholastic based league in the Lehigh Valley consists of 11 clubs from the area including Central, BECA, Emmaus, Easton, Northampton, Parkland, Nazareth, Phillipsburg and Southern Lehigh.

As part of the organization’s continued drive to continue building hockey in the community, this is a FREE HOCKEY EVENT and all games are open to the public. Following “Hockey Week Across America,” fans can come to PPL Center and cheer at these free event games for their favorite teams. Some of the upcoming events in Hockey Week Across America include Wear your Favorite Hockey Jersey Day on March 4 and Try Hockey for Free Day on March 5 which locally is taking place from noon until 1:00 p.m. at Bethlehem Steel Ice Center for kids age 4-9.

The schedule for the inaugural Phantoms Cup: