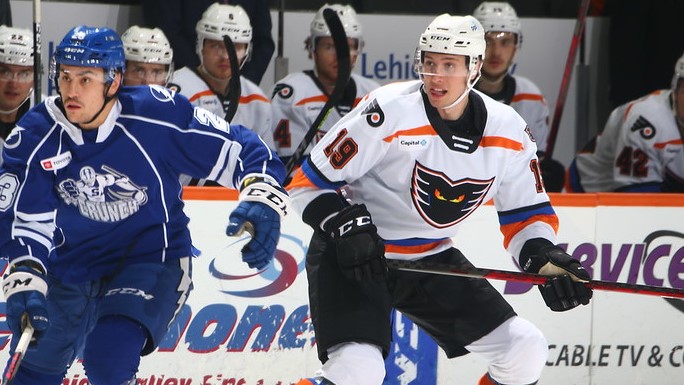 Phantoms at Home Friday and Saturday vs. Charlotte

Ratcliffe, 23, has played in 10 games with the Flyers this season scoring one goal with three assists for four points. He made his NHL debut on January 29 in an overtime win for the Flyers against the Los Angeles Kings and then scored his first career NHL goal in his third game played on February 9 vs. Detroit. Ratcliffe has also played in 33 games with the Phantoms this season scoring five goals with eight assists for 13 points.

Ratcliffe has 110 career games with the Lehigh Valley Phantoms over three seasons scoring 14-22-36. He is one of 12 Phantoms players to suit up for the Flyers this year and is one of four Phantoms players to make his NHL debut with Philadelphia this season joining Max Willman, Felix Sandstrom and Linus Sandin.

D’Aoust, 25, returned to the Phantoms last weekend from the Trois-Rivieres Lions of the ECHL where he has scored 15 goals with 15 assists this season. He has played six games with Lehigh Valley recording zero points and has nine total games in the AHL this year including two games with the Belleville Senators and one game with the Providence Bruins.

The Phantoms return to PPL Center with a pair of games against the Charlotte Checkers on Friday and Saturday nights as the franchise celebrates its 25th Anniversary Season.