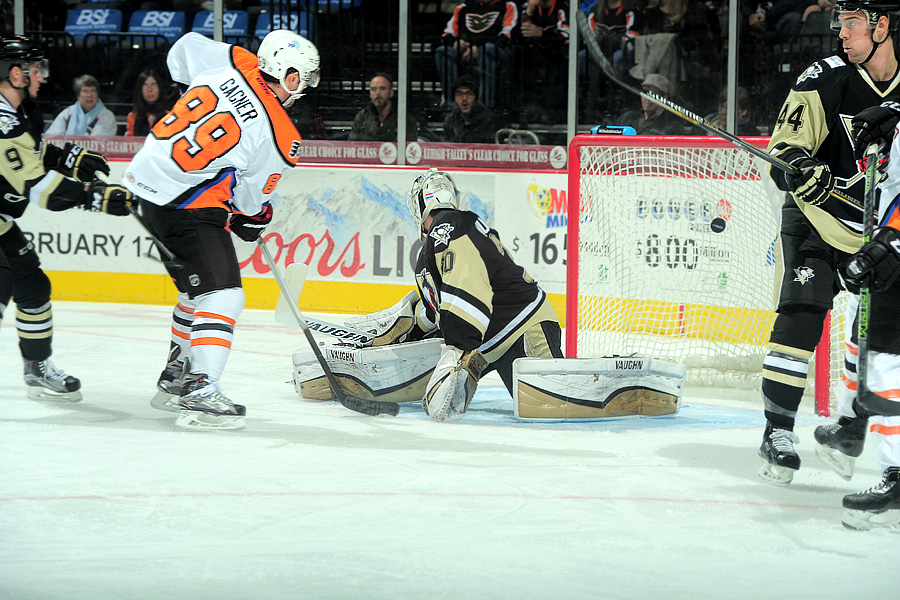 Lehigh Valley, PA – The Lehigh Valley Phantoms and Wilkes-Barre/Scranton Penguins combined for seven goals in the opening 16 minutes Friday evening only to see the defense and goaltending clamp down for the remainder of the contest as the Penguins escaped with a 4-3 win over the Phantoms in front of 8,658 fans at PPL Center. Friday’s contest was the sixth of 12 total meetings during the 2015-2016 regular season between Lehigh Valley and Wilkes-Barre/Scranton.

Taylor Leier, Sam Gagner and Samuel Morin all scored for the Phantoms while All-Star goaltender Anthony Stolarz and Jason LaBarbera combined for 19 saves. With his ninth goal of the season, Leier moved into third place among all Lehigh Valley skaters in goals this season. Meanwhile, Gagner netted his first tally since joining the Phantoms on December 30 while Morin collected the third marker of his first professional campaign.

Lehigh Valley’s penalty kill was in top form yet again as the Phantoms ran their consecutive penalty killing streak to 30 consecutive opportunities. With a 2-for-2 performance on Friday, Lehigh Valley hasn’t allowed a power play goal since a 6-4 win over the Hershey Bears back on December 18 (8 games).

Josh Archibald scored twice for visiting Wilkes-Barre/Scranton while Dominik Uher and Scott Wilson also found the back of the net for the Penguins. All-Star goaltender Matt Murray earned the victory in goal after 17 saves on 20 Phantoms shots.

The Penguins began the scoring with a pair of goals in just over five minutes to open the game. First, Archibald redirected a Niclas Andersen offering from the high slot for his second goal of the season. Sahir Gill grabbed the secondary assist on the five-on-five conversion netted 4:10 into the first period. Then, less than a minute later, Wilkes-Barre/Scranton captain Tom Kostopoulos steered a loose puck to the top of the goal crease that was punched in by Uher for his fourth goal of the year. Jean-Sebastien Dea earned the secondary helper on the even-strength strike notched 5:01 into the opening period.

The Phantoms rallied quickly though and sliced the Penguins lead in half less than two minutes later when a takeaway by Nick Cousins in the attacking zone produced an opportunity in the slot for Leier who made no mistake in quickly snapping in his ninth goal of the season. Cousins, who was named to the 2016 AHL All-Star team along with Stolarz on Friday, grabbed the only assist on the five-on-five tally scored 6:47 into the opening frame. With the assist, Cousins became the first Phantoms player this season to reach the 30-point plateau.

Leier’s goal not only sparked Lehigh Valley’s comeback efforts, but it also triggered the debut of the team’s new goal horn – a resounding 20-horn roar courtesy of Mack Trucks.

Lehigh Valley then tied the game and grabbed its first lead of the night with a pair of goals just 23 seconds apart.

First, while camped atop the Wilkes-Barre/Scranton goal crease, Gagner expertly redirected Mark Alt’s drive from the right point for his first goal since joining the Phantoms nearly 10 days ago. Danick Martel collected the second assist on the even-strength conversion tallied 8:23 into the high-scoring first period. Alt finished the evening with a plus-one rating as the third-year blueliner improved his team-leading plus/minus rating to plus-15.

Then, less than half a minute later, Lehigh Valley grabbed the advantage when a right wing wrist shot by Cole Bardreau produced a left-wing rebound off Murray that was promptly deposited by Morin into the back of the Penguins cage. Joe Rehkamp garnered the secondary assist on Morin’s third goal of the year.

But the momentum pendulum shifted back to Wilkes-Barre/Scranton before the close of the period as the Penguins were able to regain the lead with a pair of goals just over four minutes apart in the second half of the back-and-forth frame.

First, Wilson pounced on a rebound at the side of the goal in sending in his team-leading 16th goal of the season. Conor Sheary and Will O’Neill assisted on the five-on-five conversion netted 11:50 into the first period. Then, Ty Loney spun a left-wing shot towards the Phantoms cage that was altered en route by Archibald for his second goal of the game and third of the year. Loney and Steve Oleksy assisted on the go-ahead marker scored 15:54 into the wild stanza.

In all, the sides combined for seven goals on 17 shots.

And in a cruel twist of irony, that proved to be all the scoring Friday’s game would offer. The Phantoms carried the play in the final 40 minutes outshooting the Penguins 16-10 through the final two frames but just couldn’t slip the equalizing tally past Murray.

The Phantoms are back in action on Saturday when they travel to the Times Union Center in Albany for a 5:00 p.m. showdown with the Devils. Be sure to catch all the action on 790-AM WAEB, online at 790waeb.com or via the iHeartRadio app beginning with “Countdown to Faceoff” at 4:30 p.m.

Then, Lehigh Valley returns to downtown Allentown on Sunday, January 10 to battle the Binghamton Senators in a 5:05 p.m. collision. Sunday’s game is Star Wars Night as the Phantoms and their fans celebrate one of the most beloved movie franchises of all time. Fans are encouraged to come to the game dressed as their favorite Star Wars characters and will have the opportunity to meet and take pictures with some of the most iconic heroes and villains in film history, including Darth Vader, Stormtroopers and Queen Amidala, with a special appearance from the 501st Garrison.

A limited number of tickets for Sunday’s games are available now at pplcenter.com, by calling 610-347-TIXX [8499] or in-person at the Mealey’s Furniture Box Office at PPL Center [701 Hamilton Street].